Having finally completing his protracted move to Manchester City this summer, Eliaquim Mangala is now the most expensive defender in Premier League history.

Manchester City announced the signing of Mangala in August for a fee of €40m after initially trying to sign the defender in the January transfer window.

The transfer was delayed by the fact an investment trust held part of Mangala’s economic rights, and while they were willing to accept an offer below his valuation, Porto would not budge.

The delayed deal led to interest from Chelsea, with the Frenchman actually admitting a preference for the Londoners, while Manchester United failed with a late bid.

Mangala completed a medical with the club in July but the deal was still not announced despite City accidentally posting a video interview with the 23-year-old on their official website. This was swiftly removed, however, with City later claiming they had been hacked.

The deal was finally announced after Mangala arrived back from a post-World Cup holiday, with the defender revealing why he had opted to join the Premier Legaue champions.

“City is a top club in Europe," Mangala told the official website. "For me, it was an important step to leave Porto and join Manchester City in order to continue my progress. I want to win titles and I believe I can do this. I am ambitious and this is why I am here.

“I’m very happy to come to England because for me, the Premier League is the best league in the world. It is a very intense and very aggressive competition.

"There are plenty of goals, so it is also really nice to watch and I can’t wait to get started.”

Mangala’s debut was delayed due to final payments to third parties which left him training on his own at Carrington and saw him fall behind in his fitness work.

He finally made his debut on 21 September against Chelsea, putting in an impressive performance alongside Vincent Kompany in a 1-1 draw, despite City having gone behind and being reduced to 10 men after Pablo Zabaleta’s dismissal.

Mangala and Kompany combined to deny Diego Costa and indeed City remain the only team to have prevented the prolific Spaniard from registering in the top flight so far this season.

Looking assured and at home alongside the City skipper, Mangala's statistics also made impressive reading, winning 82% of his duels and enjoying a 93% pass accuracy rate against Jose Mourinho’s men.

While that performance was undoubtedly the highlight of his short spell at City, it was swiftly followed by a day to forget in the 4-2 win over Hull which saw Mangala concede a penalty and score an own goal at the KC Stadium.

With City 2-0 up, Mangala gave the Tigers hope by heading a Liam Rosenior cross past Willy Caballero, giving the goalkeeper no chance.

A clumsy foul on Abel Hernandez less than 10 minutes later then handed the hosts a penalty from which they equalised, although further goals from Edin Dzeko and Frank Lampard spared the new signing’s blushes. 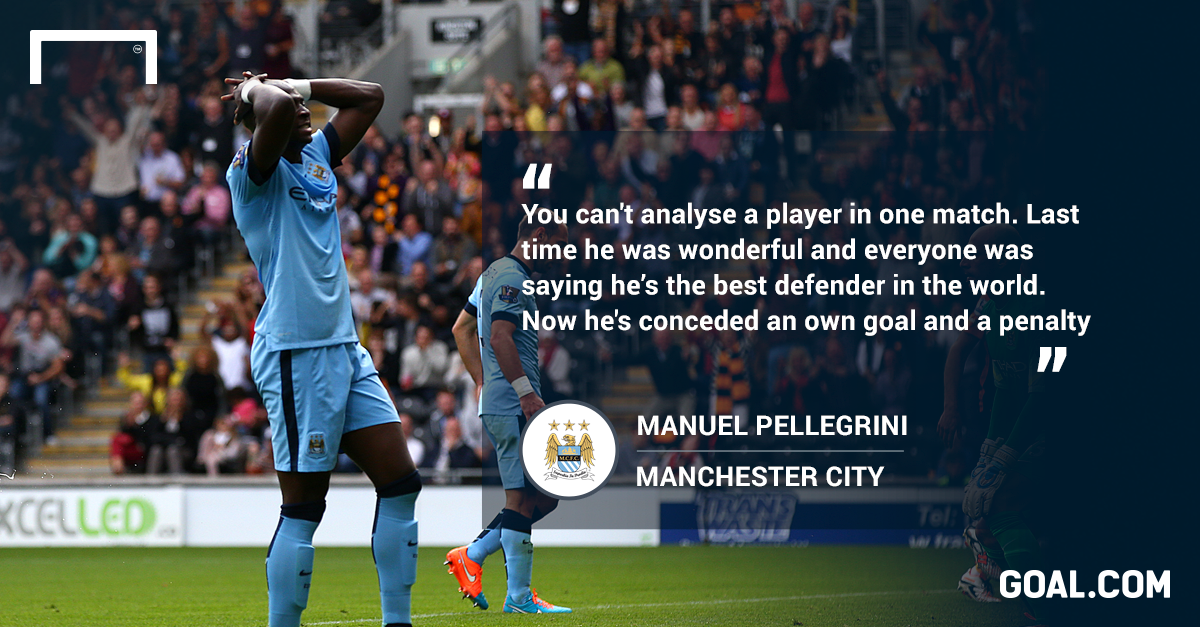 Manuel Pellegrini refused to blame Managala after the game, while Kompany was also quick to jump to his new team-mate’s defence.

"The rest of the game, he played well, he stayed professional,” he told reporters. “You could not have asked for more. The main thing is to stick to your job, sometimes you get a half an hour like this.

"I've seen in him a great reaction and in the second half he was spot on."

Mangala did not feature in City’s next fixture, the Champions League draw with Roma, but Pellegrini insisted he had not been dropped.

"You are linking one thing with the other one. Mangala was not out because he made a mistake against Hull on Saturday," he said.

"I thought for that game it was better for [Martin] Demichelis [as] they are going to play without a striker because Totti plays always as a midfielder."

Mangala subsequently returned to action as City beat Aston Villa 2-0 at Villa Park, putting in a a strong showing and almost getting on the scoresheet late on with a towering header which was saved by Brad Guzan.

Mangala signed a five-year deal with Manchester City in the summer, with the Blues clearly seeking an established partner for Kompany.

An impressive debut has inspired hope but Managala is still adjusting to the pace of the Premier League and is being eased in carefully by Pellegrini.

Still just 23, City will hope his impressive displays against Chelsea and Aston Villa are a sign of things to come and certainly he has the pace and power to become a success in the Premier League.

A slow start to his City career means he has only made four appearances for his new club so far and judgement should be reserved for the time being.

Mangala himself insists the massive price tag is not an issue for him: "Being the most expensive defender in the history of the [English] game doesn’t add any pressure."

With the champions already five points behind leaders Chelsea and with games against Tottenham and Manchester United on the horizon, as well as a crucial Champions League double header against CSKA Moscow, City will be hoping they get their money's worth.
Close