With the help of Opta, Goal have tallied up every penalty in Italy since 2009-10 to determine whether there is any basis to the claims that Juve receive more help from referees
ANALYSIS
By Carlo Garganese

The last week in Italian football has been dominated by the controversy surrounding Juventus' 3-2 victory over Roma in Turin.

A thrilling clash was overshadowed by the refereeing of Gianluca Rocchi. The official awarded three debatable penalties - two of them to the home side - and also failed to disallow Leonardo Bonucci's winning goal despite Arturo Vidal interfering with play in an offside position. Rocchi dished out three red cards, one of them to Roma coach Rudi Garcia.

The Giallorossi were furious after the game. Garcia, later fined, sniped that "in Turin the penalty area is larger". Francesco Totti complained: "By hook or by crook they always win. Juventus should have their own league. When there is any doubt whatsoever, it's always a penalty."

Juventus hit back against these accusations. Alvaro Morata, who was sent off, told Goal that "if Roma had won, they wouldn't have said anything". CEO Giuseppe Marotta branded Totti's words "unacceptable" and director Pavel Nedved argued that actually "referees fear awarding Juve calls".

The controversy has re-opened the age-old debate over whether Juventus receive more penalties from referees than the rest of Serie A. With the help of Opta, Goal has tallied up every penalty awarded in Serie A since the beginning of the 2009-10 season to determine whether there is any basis to these complaints.


Studying the data, it is immediately clear that Juventus do not receive more penalties than their rivals. On the contrary, with 31 spot-kicks over the past five years, the Bianconeri have been awarded far less than most Scudetto contenders.

Napoli lead the way with 45 penalties, followed closely by Milan on 44 and, interestingly, Roma on 42. For all their complaints this week, the Giallorossi have twice topped the penalty charts for a single campaign and just once in the past five years have they finished a season with less spot-kicks than Juve.

Despite shattering the Serie A points record in 2013-14, Juventus won a meagre four penalties all season – the fourth-lowest total. When Antonio Conte led the club to its first Scudetto since Calciopoli in 2011-12, Juve were second bottom in this category. Only in 2012-13 when they picked up a division-high 11 penalties – the same number as Napoli and Milan – did Juve do better than average.

Of the 12 teams that have competed in every Serie A championship since 2009-10, only Inter, Parma and Chievo have received fewer penalties than Juventus. 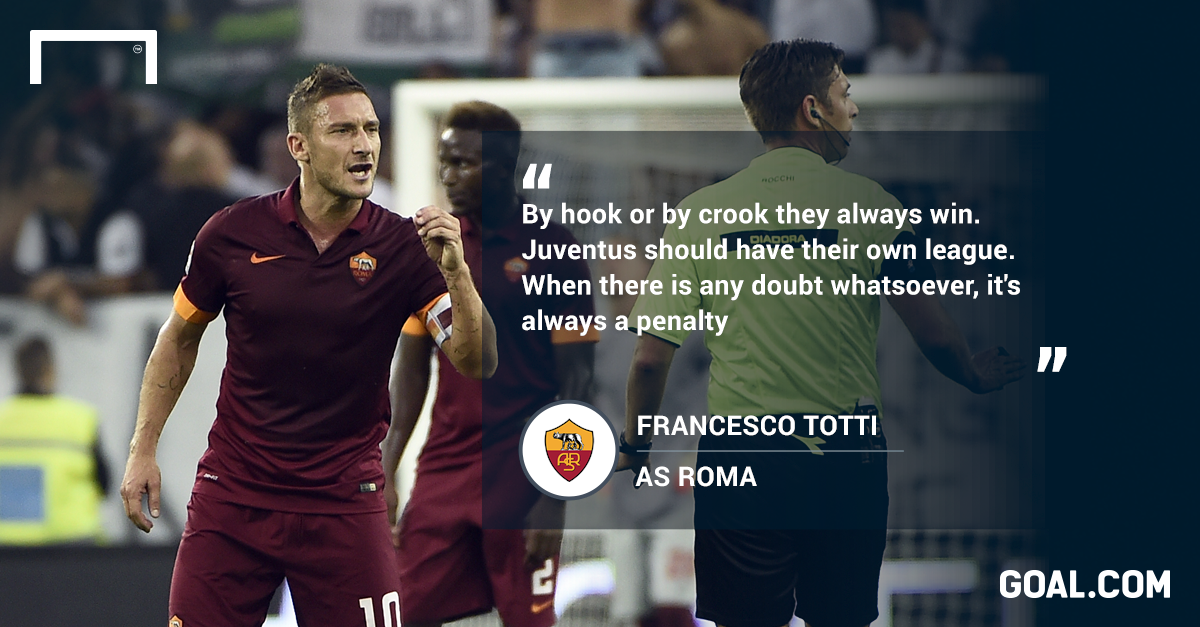 What is especially interesting is that for all the whispers of institutional bias towards the northern clubs, four of the top six sides in the penalties won column are southern or provincial. Sicilian minnows Catania had the joint-most penalties in 2011-12, Bari were second in the standings the year before, while only Napoli and Fiorentina have picked up more spot-kicks than Sardinian outfit Cagliari since the beginning of 2012-13. On the other hand, traditional powerhouses Inter have suffered in recent times and were awarded only one penalty in the whole of last season.

Of course, when reviewing penalties one must also analyse how many spot-kicks are conceded. In this area, Juventus have done well for themselves. With 22 given away from 2009-10, only Napoli (19) and Milan (21) can be happier. The Azzurri, in fact, have shipped just six since the beginning of the 2011-12 season.

Roma have much more reason to complain in this set having conceded the joint-third most (31) penalties out of the 12 Serie A ever-presents. In total, though, the Giallorossi have won nine more spot-kicks than they have given up during the overall time period, exactly the same number as Juventus.

Napoli and Milan are the big winners with a differential of +26 and +23 respectively. The losers are Chievo (-8), Parma (-9), Udinese (-10), and particularly Inter (-9) given their relative size and quality.

Of course, it is difficult to draw too many solid conclusions from the penalty data without context. Some spot-kicks are correctly awarded, some incorrectly, and others not at all. Some penalties are of very little value to a team. If a side is 5-0 up and the referee points to the spot, it will be of less importance than the award of one when the score is goalless.

It is also important to remember that the strength and style of a side also has a bearing. An attacking team with skilful, technical players like the Fiorentina of Juan Cuadrado and Giuseppe Rossi (a Serie A high of 12 penalties in 2013-14) are more likely to draw fouls in the opposition box than a reserved outfit like Atalanta. Chievo are a generally defensive, unadventurous team who throw few men forward, which helps explain why they have twice finished a season with only two penalties.

Similarly, a side with an outstanding defence like Juventus will naturally commit fewer errors in their own area. And a team that dominate territory like Roma (a Serie A low of two penalties conceded last term) will offer the opposition less time and possession to threaten them.

It must also be recognised that penalties are not the only way that a referee and his assistants can influence a game. There are red cards, offsides and line-calls to name just a few. For example, Sulley Muntari's 'ghost goal' for Milan undoubtedly aided Juventus in the race for the 2012 Scudetto.

But what we can do is deal with the facts on offer here. And while they were clearly penalised on Sunday and their Scudetto challenge may suffer as a result given the inferiority of Serie A's other 18 teams, the statistics prove that on average Roma are getting exactly the same treatment as Juventus when it comes to penalties.

Juventus have until now not been gaining any consistent advantage from spot-kicks over the last five years. Far from it. Only Napoli and Milan can be truly described as having benefited numerically from penalties, with nothing to suggest that their credit isn't deserved.

So if "the penalty area is larger in Turin", then it is just as large in Rome, and it is even larger at the San Paolo.