PROFILE: Every Europa League Thursday, Goal profiles a new starlet under the age of 21 who could be set for big things in the game. Here we look at the Fiorentina winger ...
By Mark Doyle

When former Italy boss Cesare Prandelli included Federico Bernardeschi in a training camp in March, there were many who had never heard of the 20-year-old. The winger was plying his trade in Serie B at the time, having joined Crotone on loan from Fiorentina for the 2013-14 campaign. However, Azzurri captain Gianluigi Buffon knew exactly who Bernardeschi was and greeted the youngster like a family member when the squad assembled.

“Buffon is from Carrara like me and he hugged me two or three times,” Bernardeschi told the Gazzetta dello Sport. “It was a great feeling. I had goosebumps.”

While Buffon’s interest in Bernardeschi stemmed from their shared background, the youngster had long been known to top European scouts for his prodigious talent. Indeed, in 2011, Sir Alex Ferguson had attempted to lure Bernardeschi to Manchester United only for the player and his family to decide that it was not the right time to move to such a high-profile club.

"We preferred to stay at Fiorentina because he's happy,” his father Alberto explained. “He's always been treated very well and it wouldn't have been right to leave. Also, it’s not the case that by going to a world-class team one will arrive immediately at the top. If he is good enough to have a great career, he will be certainly able to do so also by staying at Fiorentina." 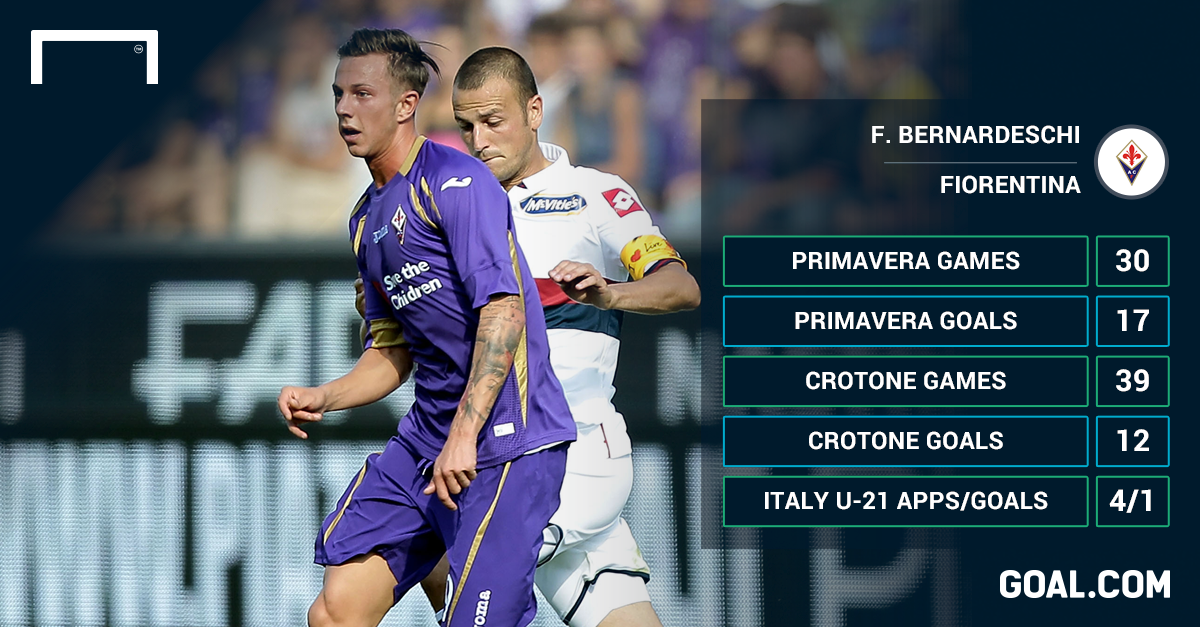 That certainly seems to be the case as he looks set to flourish in Florence. Bernardeschi joined Fiorentina as a nine-year old and has been regarded as one of the club’s most exciting prospects for some time now. After progressing through the Pulcini and Allievi Nazionali youth categories, Bernardeschi graduated to the Primavera (oldest youth group) and promptly became one of the team’s star players, scoring 17 goals in 22 games in 2012-13.

Both the player and the club felt that a spell out on loan would aid his development and he was farmed out to Crotone last summer. The move could not have gone much better for Bernardeschi, who scored 12 times in 39 games.

It was still a massive surprise when he was invited to train with Italy but Cesare Prandelli had no doubts about his decision to include a virtual unknown. “Nobody knew who Marco Verratti was when I called him up two years ago, but now everyone’s talking about him ... Bernardeschi is one of the best Italian footballers in his role.”

His favoured position is on the right wing as it allows him to cut inside onto his powerful left foot – but he is also capable of playing as a trequartista or a striker, and given his physique - he is 1.83 metres tall - he is more than adept at holding the ball up. The fact that he is a left-footed dead-ball specialist, though, has seen him repeatedly compared to Alessandro Diamanti – and Bernardeschi is a fan of the Guangzhou Evergande attacker. “I like Diamanti. He is a player with brilliant shots.”

There have also been obvious comparisons with his team-mate and principal rival for a starting berth on the right-hand side of Fiorentina's front three, Juan Cuadrado. But Bernardeschi quite rightly points out that they are more differences between the pair than similarities. "Cuadrado is a phenomenon; an artist of dribbling. He's a true winger. I have other characteristics. I'm more of a forward."

Bernardeschi relates more to Andriy Shevchenko. The former AC Milan striker was his childhood idol and he admits that he tried to imitate certain aspects of the Ukrainian’s game. “Do we have some something in common technically? Yes, but don’t make me say that I feel like ‘the new Sheva’. I'd just be happy to win a quarter of what he was able to win in his extraordinary career.”

For now, Bernardeschi is just focused on establishing himself in the Fiorentina first team this season and the early signs are encouraging. Despite Udinese’s interest in taking him to the Friuli as part of Fiorentina’s acquisition of the full ownership rights of Cuadrado, Viola coach Vincenzo Montella wanted to give the youngster the chance to impress in pre-season – and Bernardeschi took it, netting a hat-trick in the friendly win over Arezzo in August.

He has also proven his worth to the Italy Under-21s, bagging a goal and two assists in the September 9 win over Cyprus before being forced off through injury. However, he recovered in time to make his Serie A debut last weekend, coming on as a replacement for Mario Gomez in the 0-0 draw with Genoa, and could now make his first appearance in continental competition when Fiorentina face Guingamp in the Europa League on Thursday evening.

"This is a great chance and I want to give my wall so as not to disappoint anyone,” he said. On the evidence of what we've seen so far from Bernardeschi, there is little chance of that.