The attacker carries an English-player premium that inflates his pricetag but, even though the Reds have more pressing needs, he could fulfill a crucial role at Anfield next term
ANALYSIS
By Ewan Roberts

With the Southampton fire-sale still ablaze, Liverpool have returned to plunder St Mary's Stadium for a second time this summer as Adam Lallana completes his move to Anfield. The Saints' former skipper follows veteran forward Rickie Lambert in swapping the south coast for Merseyside as Brendan Rodgers's recruitment drive continues at a pace almost as frighteningly fast as his side's rapid attack.

But while Lambert appealed for a multitude of reasons – the bargain striker's aerial strength and hold-up play make him a useful, and inexpensive, Plan B – it is less immediately obvious as to what Lallana brings to Liverpool that they do not already possess in abundance, least of all at €31 million.

The 26-year-old is a fine player, blessed with balance, craft and sweat-dripping athleticism but, even after such a stellar season in which he netted nine times, it is hard to imagine him replacing any of Liverpool’s current quartet of attacking dynamite.

Daniel Sturridge was the division’s second-highest scorer last term, Raheem Sterling has established himself as the most exciting teenager in English football, Philippe Coutinho has consistently dazzled with his Brazilian flair, while Luis Suarez was, by some margin, the league’s most dynamic and deadly player – though his future at the club is shrouded in a controversy-ridden cloud of doubt and speculation.

Coutinho is the most likely casualty of that four-piece, though his production last season, admittedly in a far more attacking and front-loaded side, dwarfed that of the man who could replace him in the starting XI.

The former Inter playmaker created more chances than Lallana, dribbled past opponents more regularly, averaged more passes per game and attempted over five times as many through-balls – only two players in the league, Suarez and David Silva (both 16), completed more than Coutinho’s 13 through-balls. 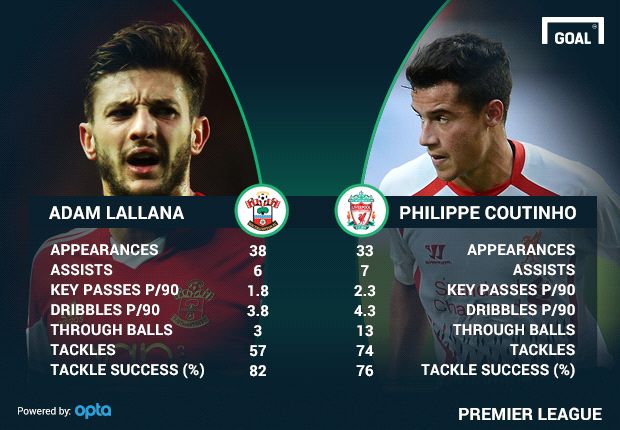 Perhaps, then, Lallana's appeal is less about his surging, jinking – if not quite exceptional – creativity and more about the aggressive, physical style that was drawn out and developed under Maurico Pochettino in the Argentine’s relentlessly pressing, high-intensity Southampton system. It is an approach with which Rodgers, arguably the most adaptable manager in the league, has often dabbled.

Lallana won possession in the final third on 31 occasions last season, more than any other player in the league, boasts a greater tackle success rate than any of Liverpool’s current attacking options, made more interceptions than Sterling and Coutinho combined and, testament to his work-rate, made the most sprints of any player in the division.

Also, for all the conjecture that Liverpool require investment in defence, not attack, it is also true that Lallana offers a degree of steeliness and tenacity that bolsters the protection offered in front of the back line. When he was not of the field for Southampton last season, the side conceded 17 per cent more goals per 90 minutes.

His willingness to press and harry high up the pitch, coupled with his quick feet and invention, makes him especially dangerous in and around the opposition’s penalty box too. Of the chances that he created last season, 37 were inside the box from open play (52%). The only Liverpool player who bettered, or even got close to, that tally last term was Suarez. Coutinho’s 20 open-play chances inside the box, meanwhile, hint at a relatively deeper role in the future.

Furthermore, before the start of the summer, Rodgers outlined a need to sign players who were “multi-functional”, capable of playing in a variety of roles and able to provide more “options”. In the versatile Lallana he now has a player who can do just that, who is both an inherently good fit for Liverpool’s existing style and capable of adding further nuances.

BRAIN AND BRAWN | Lallana made 94 combined tackles and interceptions while also topping Southampton's leaderboard for chances created
That previous absence of options and alternatives, meanwhile, was perhaps the single most defining factor, save for a certain slip, in the club falling ever-so-slightly short of glory last term.

When Rodgers turned to the bench he saw Iago Aspas and Victor Moses staring back, with the dugout starved of firepower; the latter, who failed to score a league goal last season, delivered a nine-minute cameo of such monumental incompetence against Chelsea that it is likely to be his last ever outing for the Reds.

In fact, Liverpool managed just three goals off the bench throughout the entire 2013-14 campaign and none at Anfield, astonishing given their 101-goal spree. Only Aston Villa and Norwich City endured less productive contributions from their substitutes. By contrast, Chelsea’s subs scored the most goals in the division, netting 11 times, while eventual title winners Manchester City produced 10 goals from the bench.

Worst still, Liverpool’s subs only provided two assists. Of all the substitutions Rodgers made from losing positions, just one scored or even created a goal: Sturridge’s late equaliser against Everton at Goodison Park, a player that would normally start. The extent to which Liverpool have needed quality depth, especially with a Champions League campaign on the horizon, cannot be overstated.

Liverpool may well have overpaid for Lallana, if only marginally, but he unquestionably enhances a squad in need of reinforcement and offers Rodgers new tactical ploys to consider. And, ultimately, the three points up for grabs each week should be the only numbers that concern fans, not bottom lines and profit margins, and the Reds can be confident that their latest recruit solves many of last season’s deficiencies.