The Bavarians' 2001 side was once held up as the example for modern teams to follow, but the current squad have surpassed even the achievements of Effenberg et al
COMMENT
By Peter Staunton

Great Bayern Munich teams were not always forged in defeats, but this one was. Arjen Robben's fluffed penalty in the April 2012 loss to Borussia Dortmund all but gifted Jurgen Klopp's team their second successive Bundesliga title. Nerves betrayed the Dutchman, as they would in the Champions League final a month later, and Dortmund's Neven Subotic took the opportunity to rub Robben's nose in it. His crass triumphalism compounded the misery felt by those in red.

It was a very un-Bayern season, all in all; blighted by a frail mentality that was totally absent in the class of 2001. "We were under a lot of pressure as a team," Oliver Kahn told Uefa the year of his team's penalty shootout victory over Valencia. "It was the last chance for that generation."

It was a chance they grabbed wholeheartedly; a chance similar to the one spurned in gutless fashion by Bayern on home soil in the final at the Allianz Arena. The 2001 group would never in a million years have lost that penalty shootout against Chelsea. Just imagine Stefan Effenberg watching as first-team regulars spurned the opportunity to take a spot-kick and win the European Cup for Bayern.

But the ghosts of 2012 have been laid to rest now. The Roten won the Champions League in gloriously dominant style in 2013. They took back the DFB-Pokal after being outplayed by Dortmund in the final a year before. They have learned the Bayern technique on the training fields and they have earned the Bayern mentality the hard way. This squad has acquired the strengths of their predecessors without being afflicted by any hereditary weaknesses. 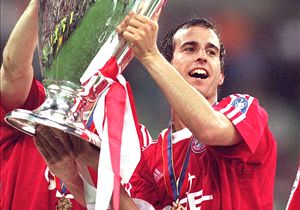 The best goalkeeper in the world, a blond German, is the last line of defence. A cadre of native talents patrols the pitch and a diminutive number 7 pulls the strings. The Bundesliga shield and the Champions League cup gleam in the trophy cabinet. Similarities certainly abound between the Bayern sides of 2001 and 2013. But, ultimately, it is the team of Manuel Neuer, Bastian Schweinsteiger and Franck Ribery which will go down in the annals of time as the better of the two.

The class of 2001 boasted many pre-eminent talents, chief among them Oliver Kahn, Effenberg and Mehmet Scholl. Owen Hargreaves, then a blossoming 19-year-old, also emerged through the ranks and played a pivotal role in their success, starting in central midfield in the final at San Siro.

But they juddered their way to the Bundesliga title. There was no such difficulty for Jupp Heynckes' team last season. They broke 30 records in their pursuit of the championship shield including most points, most goals and fewest conceded. No side has ever dominated a league campaign like Bayern did last term. They dropped 11 points. They scored 98 goals. They were the best-performing team in the history of the German championship.


The Bayern side of 2000-01 were not a model of consistency in domestic competition. They failed to win 15 out of 34 en route to a title that was almost not theirs at all. Schalke were 'four-minute champions', celebrating on the pitch at the end of their win against Unterhaching, believing that Bayern had been beaten by Hamburg. But Patrik Andersson conjured a moment for the ages with his 93rd-minute indirect free-kick which was fired like an arrow into Gelsenkirchen hearts.

A heart-stopping finale, scripted by a football god that could only be a Bayern fan, confirmed that club's status as German football's dream-destroyers in chief. What they did to Schalke in 2001 was done onto the 2012 group in abundance. Bayern were on the receiving end of the crushing disappointments that were once only theirs to dish out. They survived it; they took their own medicine.

Hitzfeld's Bayern defeated the English and Spanish champions-elect in the quarter and semi-finals of the Champions League; their 2013 counterparts overcame the incoming Italian and Spanish title-winners. The performance, though, against Barcelona last season sets Heynckes' team apart.

That 7-0 aggregate win capped a remarkable turnaround for the once-browbeaten, desolate group who had squandered the chance to win it 12 months previous. The 2001 side, too, took their shot at redemption, beating a Manchester United team who pilfered the title from them in 1999 in the 2000-01 quarter-finals, but there was something emphatic and era-defining about Bayern's recent win over Barca.

Academy kids like Schweinsteiger and Philipp Lahm lack the rough edge of predecessors and are not as streetwise. In their domain, patience and technique are king. They are worth no less as players for that but in matches decided by aggression or mentality they came up short time and again.


That all changed against Barcelona. They pulled apart the best team in the world and feasted on their carcass. And for all their dominance, all the skill and ease with which they won, it was a throwback to that belligerent cockiness of Effenberg which stands out as the most memorable moment of the tie. Not only was Thomas Muller's shoulder-block of Jordi Alba in the run-up to Arjen Robben's 73rd-minute goal unsportsmanlike, it was brash. And what's more, he re-enacted it with the Dutchman on the pitch at the end of the game, laughing about it.

That betrayed a self-assuredness, a discourteousness, previously unbecoming in this team. "I don't see a Jens Jeremies who has already bitten his opponents' calf in the warm-up," club president Uli Hoeness remarked after the Champions League final defeat to Chelsea. The implication there was that Bayern lacked that jagged edge, that mental robustness that ran through the club's icy veins. No more. 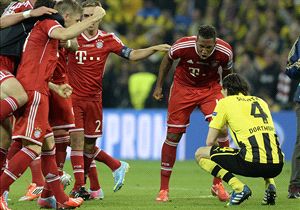 "If they win the Champions League and the DFB-Pokal to add to their league title then that will make them triple winners. I can say after that they are better than us," said 2001 veteran Samuel Kuffour ahead of the Champions League final against Borussia Dortmund in May.

That they did. And on the Wembley turf, Jerome Boateng sought out Subotic. 'How do you like it?' his face, contorted in ecstacy, seemed to scream at the Serb. It was a symbolic moment. Bayern became Bayern again.
There is a sense of entitlement and supremacy that traditionally goes with playing for Bavaria's finest. The class of 2001 had it; the class of 2013 earned it.