The Portuguese pair co-existed for three tense years at the Bernabeu, with communication limited and the union held together by agent Jorge Mendes in its most testing times
SPECIAL REPORT
By Ben Hayward | Spanish Football Writer

It was an iconic image. Cristiano Ronaldo raced towards the touchline, held his arms out wide and launched himself into an emotional embrace with Jose Mourinho. Cameras flashed, fans applauded and replays ran as Real Madrid's star player and coach connected in a show of strength and unity while the world was watching. But was it real?

Cristiano scored all three goals as Madrid overcame Levante 3-1 in February of 2012 and the Portuguese had promised to celebrate with fitness coach Rui Faria if he managed to net a hat-trick. So when his stunning strike hit the back of the net, off he raced to make good on his vow. Ronaldo ran fully 50 yards towards the Bernabeu bench, while Faria emerged from his seat in anticipation. But Mourinho beat him to it and, unable to sprint past his coach, the forward felt obliged to hug him instead.

The image painted a positive picture. In reality, however, the Portuguese pair endured a rocky relationship from the outset at Madrid, with Mourinho sensing an air of over-confidence from Cristiano in their talks and the player unhappy at criticism and perceived negative tactics from his coach.

Bust-ups between them were frequent, even in Mourinho's first season at the club. Days after winning the Copa del Rey thanks to Ronaldo's headed winner at Mestalla against Barcelona, Madrid lost 2-0 at home to the Catalan club in the first leg of the sides' semi-final at the Santiago Bernabeu. Upset by his team's ultra-defensive approach, Cristiano urged his team-mates to play a more attacking game. Later, Mourinho gave his prized player a dressing down and an argument ensued. Ronaldo revealed to reporters after the match that he had not liked Madrid's conservative approach at all. The conclusion? He was dropped by his coach for Real's next game - a 3-2 home defeat to Zaragoza. 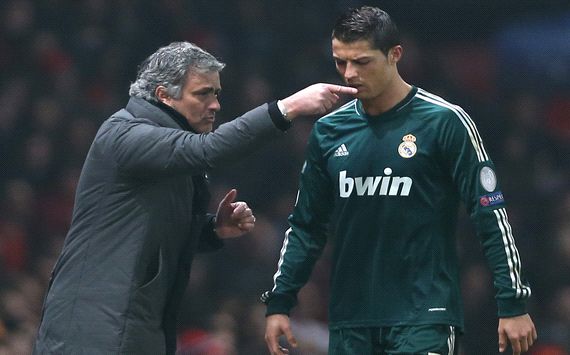 On deaf ears | Mourinho felt Ronaldo refused to listen to his instructions
Mourinho mostly gave instructions to Ronaldo via his assistants but they were forced to reconcile by agent Jorge Mendes - a friend and business associate of them both. Aggrieved at his client having been benched when he was in search of the prestigious Pichichi prize for La Liga's top scorer, Mendes stepped in to settle the dispute.

It didn't happen again. Both Mourinho and Ronaldo were making mega money with Mendes' company Gestifute and, above and beyond even Real Madrid, there was a business to maintain. "Their relationship was one of complicity - they spoke very little in their three years together at Madrid," a source close to the club told Goal. "It was Mendes who kept them together."

And Mendes would intervene once more. In January of this year, Mourinho was under fire after leaving club captain Iker Casillas on the bench and had even earned the wrath of the Bernabeu boo-boys. Running out of friends among his squad, the Madrid media and also the supporters, the coach needed an ally. And who better than the club's finest footballer? So Ronaldo not only dedicated a goal to Mourinho in the 4-3 win over Real Sociedad (at Mendes' request), but also publicly backed his boss. The agent asked Cristiano to tell the press that his coach only operated for the good of the team and the forward obliged. And Mourinho breathed easier.


But nine days later, the relationship was damaged further. Mourinho congratulated his side to a man after Madrid beat Valencia 2-0 in the Copa del Rey, but had singled out Cristiano for criticism during the encounter and reproached him in the dressing room following the final whistle - in front of all his team-mates. "Shut up and run!" Mourinho is said to have shouted at his player during the game itself. "You have to track back, you have to show more solidarity with your team-mates..." he added afterwards. A row followed before Mourinho left and Ronaldo headed to the showers, leaving president Florentino Perez to pick up the pieces. "Don't worry presi..." one of the players told the club chief. "This sort of thing happens often!"

Ronaldo felt aggrieved at a time when he had stood up for his boss both publically through his quotes to the press and also by his dedication of a goal the previous week - not to mention his continued excellence on the pitch itself.

"I believe that was the moment their relationship went downhill," former Madrid goalkeeper Paco Buyo told Goal. "Ronaldo was unhappy at the criticism from Mourinho - particularly because he was the one scoring most of the goals at the time."

Mourinho later claimed the 28-year-old was unable to accept advice. "When I criticised him from a tactical point of view because I felt he could still improve, he did not accept what I had to say. That might be because he thinks he already knows everything and the coach cannot help him grow anymore..." he told the press.


But what he failed to mention was the nature of his issue with Ronaldo, which was more concerned with Cristiano's personal contribution than any real tactical indication. The forward was also disappointed at how he had been treated, only days after a strong show of support for his boss. According to our source, he felt frustrated and let down.

And the 50-year-old took another swipe at his former forward this week when he claimed Cristiano was not the "real" Ronaldo, compared to the Brazilian of the same name.

However, the former Manchester United star refused to be drawn in on the controversy, insisting "some things in life are not worth commenting on." And, in typical Ronaldo fashion, he let his football do the talking on the pitch in Wednesday's clash against his former coach, as he scored a double to help Madrid to a 3-1 victory over Chelsea.