The 31-year-old shot stopper has broken record after record with his country and here, we take a look at some of his landmarks with both La Roja and Real Madrid
ANALYSIS
By Ben Hayward | Spanish Football Writer

You would think the dissenting voices would have been silenced by now. Constantly criticised, frequently questioned and often doubted, Iker Casillas has proved time and time again he is not only the greatest goalkeeper in Spain, but also the world.

While Victor Valdes and Pepe Reina have faltered in the current campaign, Casillas stands strong for Spain and continues to break record after record for La Roja. Last Friday, as Vicente del Bosque's men beat Belarus 4-0, the Real Madrid glovesman smashed his own mark for minutes without conceding in a Spain shirt, now 727.

It was just another record for the young man from Mostoles, though, and at 31, Iker is set to go on making history for many years to come - with both club and country. Here, Goal.com takes a look at his best numbers in an incredible 13-year career.

1 - Despite his superb form in La Liga, Casillas has claimed just one Zamora prize - awarded to the goalkeeper who has conceded the least goals at the end of the season - in 2007-08. He also won the Golden Glove at World Cup 2010, an honour bestowed upon the tournament's best shot stopper.

2 - Casillas has won two prestigious Principe de Asturias awards, having claimed this year's prize along with Barcelona and Spain team-mate Xavi, and the 2010 title in unison with his successful Spain colleagues after glory in South Africa.

3 - Casillas has captained Spain to three out of their four major international tournament wins (Euro 2008, World Cup 2010 and Euro 2012). La Roja's other success was a European Championship in 1964.

6 - He has made six penalty saves in major competitions for Spain - two in the shootout success against Ireland at the 2002 World Cup, two to deny Italy in the quarter-finals of Euro 2008, one versus Paraguay in 2010 and another against Portugal at Euro 2012.

9 - Friday's clean sheet against Belarus saw Casillas draw level with former Spain team-mate Santiago Canizares for the most games without conceding a goal for La Roja's senior side. Another shut-out against France on Tuesday, therefore, will see him set yet another new mark.

82 - Casillas holds the record for the most clean sheets at international level, with 82, now 10 clear of Edwin van der Sar, the previous highest. 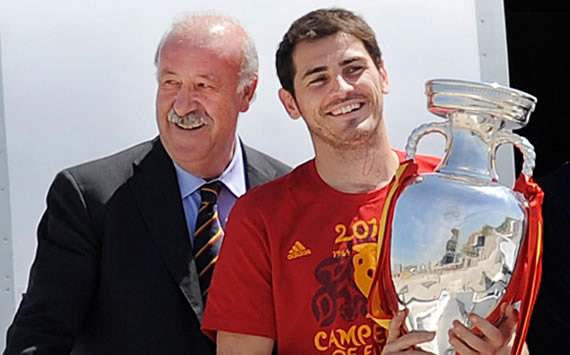 That winning feeling | Casillas with the European Championship trophy

104 - During Euro 2012, Casillas became the first player ever to win 100 matches at international level. He is now on 104 victories with La Roja.

509 - After going behind to Italy in the first match of Euro 2012, the keeper went 509 minutes without conceding in the continental competition to set a new European Championship record. Italy great Dino Zoff had held the previous mark with 494 minutes.

636 - Casillas is fourth in the list of all-time appearances at Real Madrid, closing in on Santillana in third (645) and not too far behind former colleague Manolo Sanchis (in second with 711), and Raul (first on 741).

727 - He has gone 727 minutes without conceding a goal for Spain, beating his own previous mark of 708, which he set with his national side in 2008. In competitive matches, the total is 689 minutes.