Under fire from his own fans and courting controversy for allegedly punching a team-mate, the Portuguese international's career has hit the doldrums
COMMENT
By Stephen Gillett | Portuguese Football Writer

Fresh from picking up the Players' Player of the Year trophy awarded to him by his team-mates, and with a third Premier League winner's medal in his pocket, the United winger looked ready to take the footballing world by storm.

Nani finished the 2010-11 campaign with 10 goals to his name, and comparisons with his United predecessor and compatriot Cristiano Ronaldo didn't seem too far-fetched. Like Ronaldo, he came through the ranks of Sporting's famed youth academy before catapulting to stardom at Old Trafford.

Eighteen months on, however, and Ronaldo is a bona fide footballing great, while Nani is facing something of a mid-career crisis. Medals and memories dull fast in football and, while his compatriot was busy breaking records at the Bernabeu last year, Nani endured an inconsistent, injury-ravaged season.

He did recover his fitness for Portugal's tilt at Euro 2012, starting all of the Seleccao's games as they reached the last four before losing to eventual champions, Spain. 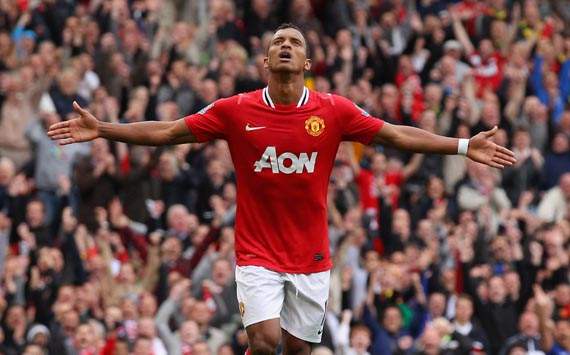 In the doldrums | Nani has failed to realise his potential at Old Trafford
However, while Ronaldo was taking the tournament by the scruff of the neck and gaining plaudits for match-winning performances against Netherlands and Czech Republic, Nani - though hardly poor - had a relatively quiet tournament.

The expectation was that Nani would take his game up a notch this season. Instead, he has been mired in contract wrangles - with United seemingly unwilling to extend the two years left on the winger's current deal - and controversy surrounding alleged fisticuffs with reserve team player Davide Petrucci.

A series of tepid displays, most notably against arch-rivals Liverpool at Anfield in late September, have seen the 25-year-old barracked by sections of his own fans and dropped completely from Sir Alex Ferguson's squad for the Reds' last league outing against Newcastle United.

To compound the winger's misery, Ferguson has recently hit upon a 'winger-less' midfield diamond - which he employed in the 3-0 win against Newcastle - which doesn't favour Nani.


So what's gone wrong? Has Nani's Old Trafford career turned irredeemably sour or can he recapture his form and fulfil his potential? His ability is not in doubt. He has a change of pace, fantastic feet and - as a goal nigh on every five games for club and country testifies - he is a match-winner.

However, sheer ability is not enough - as the career of uber-talented Portuguese winger, Ricardo Quaresma, clearly illustrates. Another product of Sporting's seemingly endless conveyor belt of superstars, the 29-year-old, now an outcast at Besiktas, was the undisputed golden boy of Portuguese football at the start of the millennium.

He burst onto the scene as a precocious teenager at the Alvalade and it soon became apparent that, technically, he had it all. He was genuinely two-footed with dazzling dribbling ability, a searing change of pace and great balance. By no means a footballing failure, he has won four Primeira Liga titles (one with Sporting, three with Porto) and played for European powerhouses such as Barcelona, Inter and Chelsea.

However, he has failed to hit the heights many predicted, largely due to his attitude and inflexibility. His footballing CV is littered with fall-outs with players and coaches, and - even at his peak - he has received regular criticism for his tactical indiscipline and a selfish streak that manifests itself in dribbling with the ball too often. It is also widely felt that he lacks good decision-making skills and has a 'blindspot' when it comes to picking the right pass.

Quaresma failed to address these gaps in his footballing DNA and is now regarded in his home country as a symbol of squandered talent. And there are definite similarities between the two. Like Quaresma, Nani stands accused of often picking the wrong option - shooting when others are better-placed, for example - and neglecting to pull his weight defensively.

Perhaps the biggest lesson Nani could learn from Quaresma is that to fulfil potential and evolve, players must be prepared to learn. Today, he looks to be the same technically gifted footballer he did a few years ago...but he doesn't seem to have fine-tuned the weaker areas of his game. The less he evolves, the more frustrated he, his coaches and his supporters are likely to become.

In contrast, the Ronaldos of this world are works in progress, constantly polishing their game both on and off the pitch. Jose Mourinho once said of Quaresma, when managing him at Inter: "He is a great talent, but...he will have to learn, otherwise he won’t play."

The same may very well be said for Nani.
Close