The legendary veteran opened up the Milanese at will at San Siro, and it will take a brave man to bet against the Scudetto holders after they thumped Udinese
COMMENT
By Kris Voakes at San Siro


It was fancy, it was fluid, and it was great fun to watch, but for Inter fans, their 3-1 defeat to a Francesco Totti-inspired Roma was a reminder that their side have a lot of growing up to do – and fast – if they are to challenge Juventus for the Scudetto this season.

The Giallorossi skipper rolled back the years to help his troops tear an abysmal Inter defence to shreds, with the movement between he, Pablo Daniel Osvaldo and Alessandro Florenzi down the Roma left being the feature of a hugely deserved victory at San Siro.

The No.10, looking as fit and as content as he has in a long time, capped his excellent display with a magnificent through-ball for Osvaldo to put Roma back in front, having also supplied the final ball as Florenzi ghosted into space to grab the first-half opener. By the time Marquinho turned in Osvaldo’s nonchalant ball from the left wing, Inter had been beaten into submission by their visitors’ superior energy, ideas, desire and movement.

It started from the midfield, where Florenzi put in a fantastic shift on the left before switching to the right after Daniele De Rossi left the fray with a foot injury and performed equally admirably. Panagiotis Tachtsidis was also heavily influential, while Mattia Destro stretched Inter whenever called upon.

“Yes, they were younger, they were faster, they were more positive,” said Roma coach Zdenek Zeman of his midfield after the match, agreeing with the assessment that it was in the centre of the park that the Giallorossi laid the groundwork for their win. 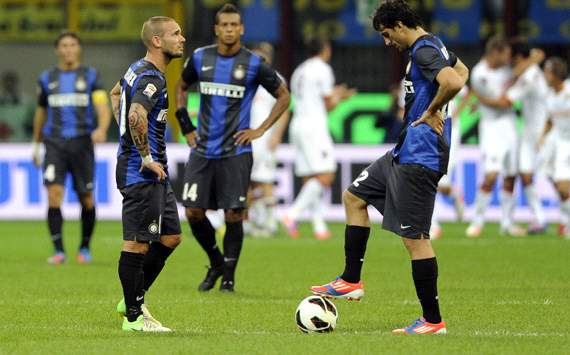 It also reflected badly on the Nerazzurri. If Roma were younger, faster and more positive, it was in part due to the fact that their hosts were laboured, slow and negative. On top of that, their defensive work was horrible.

Florenzi found space for Roma’s first goal thanks to Walter Gargano allowing the youngster to run and Matias Silvestre paying no attention to the advancing opponent. When Osvaldo made it 2-1, he did so peeling off an Inter back four that had been warned countless times, with a handful of previous runs having just about fallen foul of the offside flag. One was bound to stick, and when it did there could be no complaints.

Silvestre and Andrea Ranocchia planted a cherry on the icing by allowing Marquinho time and space for the final goal, but Luca Castellazzi, who did little to inject confidence and authority into his defence all night, should still have effected a save from the narrow angle.

It was not as though Roma’s defence had been all that much better though, more that Inter couldn’t make the most of it. Their front six – unlike that of the Lupi – gave the impression of a group thrown together at the last minute. There were occasionally impressive individual moments, but nothing seemed to be working as a unit.

Antonio Cassano’s goal came with a touch of fortune, his shot cannoning off the outstretched leg of Nicolas Burdisso and spinning in off the far post after Leandro Castan had allowed the striker to turn and shoot. Arguably, Cassano shouldn’t have started. He still looks a long way off match fitness, and was replaced after only five minutes of the second period having spent the majority of his time on the field looking rather irritated by the hotch-potch approach of his new side.

The movement of Roma’s front three was not matched by Diego Milito, Wesley Sneijder and Cassano, with Yuto Nagatomo and Javier Zanetti also penned back so much that overlapping runs were a real rarity as Inter lacked new angles of attack. Each neat flick or slick pass from a white shirt was a reminder of what was missing from the Nerazzurri.

The performance, perhaps more so than the result, leaves nobody in any doubt that Andrea Stramaccioni has a hell of a job on if Inter are to become the real deal under his leadership. Yes, there are a lot of new faces in his squad, but they have had more competitive fixtures than anyone else in Italy this term, giving them more chance to blend. Alvaro Pereira apart, every one of these players had worn blue and black before.

What Inter were missing was any kind of direction, any kind of out-of-the-box thinking. They were one-dimensional, lacking pace of both movement and passing. Stramaccioni said afterwards that Inter lacked something psychologically, but they handed over that particular baton when they allowed Roma the freedom of the park and offered nothing in return. If they really harbour hopes of chasing down Juve this term, then much has to change, starting with the coach’s approach to his team’s style and also with some of his team selections.

They need all of this to happen sooner rather than later, with Juventus already threatening to run away with the league. Their 4-1 win at Udinese came with the compulsory hint of controversy, but it also demonstrated just how easy they find some of the very same things that Inter and the rest are lacking.

Zeljko Brkic was hugely unfortunate to see red in the 14th minute for his foul on Sebastian Giovinco despite there being no doubt that it was worthy of a penalty. The time has come for referees to stop pulling a red card out for every single foul made by a goalkeeper. A clear goalscoring opportunity, it was not, with Giovinco having Danilo immediately to his left and Maurizio Domizzi to his right as Brkic made contact. There was still much work for the little striker to do, and as such, the Serbian should not have been ejected.

Either way, the Bianconeri more than likely would have won a fixture they dominated almost from start to finish against an Udinese side suffering a hangover from the double blow of their Champions League knockout and a summer transfer window which saw the heart ripped from their first team.

Giovinco would add two cool second-half finishes to his account after Arturo Vidal had converted the early penalty and Mirko Vucinic slid home the killer second on the stroke of half-time, with Andrea Lazzari’s first goal in an Udinese shirt coming too late to have any kind of effect.

Such is the Friulani’s demise at the moment that one Inter fan watching the game on TV outside San Siro commented: “They’re dead. Udinese are dead, dear God.” But many more performances like the one the same fan would witness a couple of hours later inside the Meazza, and Inter’s assault on the top three could quickly head the same way, with Juventus already looking more than ready to dance on their grave.