Tuesday's narrow loss in Germany may turn out to be a decent result for the Spanish side, but Madrid must now show they can beat the best in a week which could define their season

It was a familiar scoreline. Bayern beat Real Madrid 2-1 in the teams' last two Champions League semi-final meetings in Munich, in 2000 and 2001, and history repeated itself on Tuesday night at the Allianz Arena. But unlike those two occasions, this time around the winner will be decided at the Santiago Bernabeu after Mario Gomez's late strike left the tie very much in the balance, while doubts remains over Real's credentials against top opposition.

Madrid lost 2-1 in Munich in 2000 to secure an incredibly tight 3-2 aggregate success over the Bavarians en route to their penultimate Champions League crown (despite having suffered two heavy defeats to the same side in the second group stage) but were knocked out at the semi-final stage a year later following an identical scoreline at the old Olympic Stadium, as Bayern claimed the trophy.

Munich proved a difficult destination for Real once more on Tuesday, although this time the Spanish side will be eager to return to Bavaria in a month for the competition's grand finale. Should they do so, however, they must perform dramatically better than what they managed last night.

There were some promising performances for coach Jose Mourinho on Tuesday, however: Pepe stayed solid at the back; Sami Khedira was tireless in midfied; Karim Benzema looked lively in attack. But the negatives outweighed the positives as a number of players failed to deliver.

Sergio Ramos was uncharacteristically poor in central defence and failed to clear as Franck Ribery gave Bayern a first-half lead, while Fabio Coentrao's dreadful display culminated with a hasty challenge on Phillipp Lahm which allowed his opposite number to advance down the right and cross for Gomez to score the all-important equaliser.

Fellow full-back Alvaro Arbeloa was woeful again, Xabi Alonso was starved of space, Angel Di Maria struggled to stay on his feet and even Cristiano Ronaldo was well below his brilliant best as he lost possession on numerous occasions and failed to test Manuel Neuer from dead-ball situations or from open play.

And it was from a set-piece situation that Bayern took the lead as Ramos failed to clear a corner and the ball subsequently fell to Ribery to rifle home a drive through a crowd of players in the penalty area. Replays showed Bayern's Luiz Gustavo to be potentially interfering with play in an offside position as the Brazilian looked to be obstructing the view of Madrid goalkeeper Iker Casillas.

Mourinho moaned later on about the "clear offside" the officials had failed to spot, but deep down he will be much more concerned by his side's dubious defending and a 16th set-piece strike conceded in 2011-12, an unusually poor statistic for a team coached by the Portuguese. 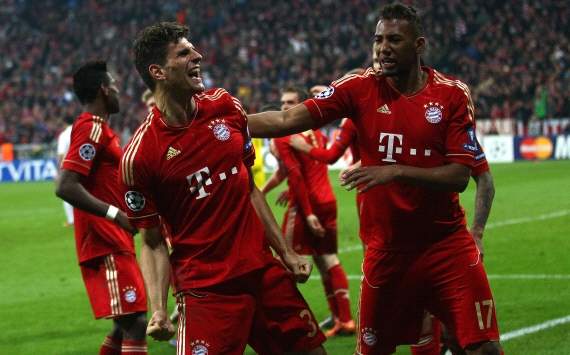 Super Mario | It was the in-form forward, of Spanish origin, who hurt Madrid right at the end

Mesut Ozil restored parity with a tap-in after the interval following lacklustre attempts in the build-up by both Ronaldo and Benzema, although Cristiano's cutback for the German atoned for his earlier miss. But there was little more in the way of cheer for Madrid as the game ended in forlorn fashion for the Spanish side.

Gomez' goal was rich reward for the home team's persistence and pressure in a game they dominated but were unable to tighten their grip upon right until the very end. So it sets up a dramatic date at the Bernabeu next week as Madrid attempt to show at the second time of asking that they have what it takes to overcome the very best sides on the continent, just as they will in La Liga on Saturday in their Camp Nou Clasico clash at Barcelona.

The next two fixtures, then, could define the season for Madrid and if they are to aspire to the very biggest of prizes, the Merengues must prove their mettle against Europe's elite. At the moment, despite their fantastic form in 2011-12, when it comes to facing the top teams at least, the jury is still out on Mourinho's Madrid.