In the wake of the defender's second ousting from the England captaincy, we take a look back at the ups and downs that have shaped his career thus far

There is a sense of deja vu as England and Chelsea skipper John Terry finds himself on the back page of every newspaper in the country after being dismissed as national team skipper by the Football Association on Friday.

The FA took the decision after the centre-back was accused of racially abusing QPR defender Anton Ferdinand when the two sides met in October, with the trial date set for July and the 31-year-old having entered a plea of not guilty.

It is the latest in a long line of controversies that have punctuated Terry's career. Goal.com reflects on the defender's highs and lows both on and off the pitch since he broke through to the Chelsea first team in 1998. 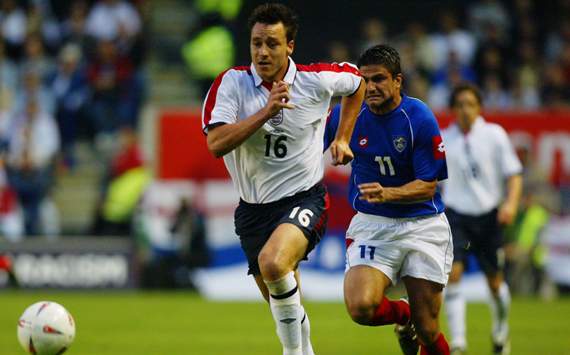 Starting out in the famous West Ham United Academy in 1991 at the age of 10, Terry was initially a midfielder. He went on to join Chelsea’s youth system in 1994 and only a lack of centre-backs in west London led him to take up the position in which he now plays.

On 28 October 1998 he made his bow as a professional footballer, coming on for the Blues late on in place of Dan Petrescu during a League Cup fourth round tie against Aston Villa at Stamford Bridge.

CHELSEA'S PLAYER OF THE YEAR

The 2000-01 season was the breakthrough year for Terry. He made 26 appearances in all competitions, including 19 starts in the league, and was voted ‘Player of the Year’ at Chelsea.

The following season his prominence grew, and he established himself as part of the first-choice central defensive pairing alongside captain Marcel Desailly. Terry first captained the side on 5 December 2001 when Chelsea lost 1-0 to Charlton Atheltic at Stamford Bridge thanks to a last-minute Kevin Lisbie goal.

In 2002 the defender, along with then team-mate Jody Morris, was cleared of assaulting a bouncer at a private members' club. The doorman accused one of the pair of throwing a bottle at his face, leading to 28 stitches.

The case went to court and Terry admitted to punching the bouncer in the face, but pleaded self-defence, and was found not guilty of affray, wounding with intent and unlawful wounding. During that affair, Terry was temporarily banned from England national sides by the FA.

It was his second indiscretion with Morris: in September 2001 the pair, along with Frank Lampard and Eidur Gudjohnsen, were fined two weeks' wages by Chelsea for drunkenly mocking mourning Americans at Heathrow in the immediate aftermath of the 9/11 terrorist attacks.

Having made over 200 appearances for Chelsea, Terry was named in the senior England squad for the first time in March 2003 as the national side prepared to take on Liechtenstein and Turkey.

The then 22-year-old failed to make the matchday squad in either game and had to wait until 3 June to be awarded his first full international cap, coming on as a half-time substitute in a 2-1 friendly win over Serbia & Montenegro at the Walkers Stadium in Leicester.

Terry’s first start for England came in just his second appearance as he lined up on the Portman Road turf to help the Three Lions to a 3-1 friendly victory over Croatia in August, playing the full 90 minutes. 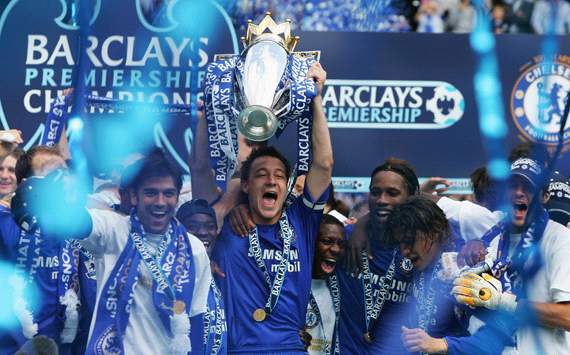 During the 2003-04 season, Chelsea boss Claudio Ranieri named Terry as captain whenever the current captain, Desailly, was injured. Following a series of strong performances, coupled with the need for younger talent to replace the ageing Desailly, Terry was given an extended run in the first-team and went on to form a strong partnership with William Gallas.

Come the start of the 2004-05 campaign, Desailly had retired and new manager Jose Mourinho named Terry as his permanent captain. It would prove to be the defining season of his career as he went on to lead Chelsea to re-write the history books and finished up being voted PFA  Player of the Year by his fellow professionals.

As the newly installed captain, Terry led his team to their first ever Premier League crown in May 2005. Along the way Chelsea accrued the best defensive record in Football League history, conceding just 15 goals in 38 games, and a Premier League best 24 clean sheets (in a 38-game season).

This was preceded by a League Cup triumph in February 2005 and followed by a Community Shield victory in August, and further League title success the following season.

In 2006, Terry admitted to cheating on his girlfriend (now wife) Toni Poole with a number of women and vowed never to do it again.

“I really regret what I’ve done to Toni. I’ve misbehaved and slept with girls behind her back and that’s not right. She knows about it all now and we’re moving on. I’m not going to cheat on her ever again.”

Later the same year Terry was reportedly caught "engaging in a sexual act" with a 17-year-old in his car but the matter was taken no further.

Later in 2006, after Sven-Goran Eriksson’s departure as the national team’s coach, Steve McClaren was brought in and as one of his first actions in his new role, he removed current captain David Beckham from the squad entirely and named Terry as his permanent replacement as skipper, claiming that he was convinced the defender would “prove to be one of the best captains England has ever had”.

Terry captained England for the first time on 16 August 2006 at Old Trafford. He marked the occasion by opening the scoring in a 4-0 victory. England went on to concede just twice in their first seven competitive games with Terry at the helm, keeping six clean sheets in the process. 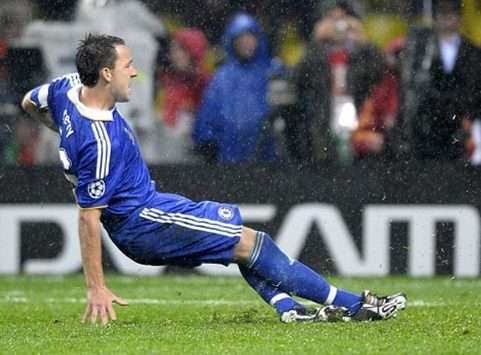 Chelsea had never won the Champions League but after three semi-final exits in the previous four years Terry was finally leading his club out in a final at the Luzhniki Stadium in Moscow to face domestic rivals Manchester United on 21 May 2008.

After a tense 120 minutes, a miss by Cristano Ronaldo for United's third penalty and a perfect return for Chelsea in the shoot-out meant that Terry had the chance to win the trophy for his team. As TV commentator Clive Tyldesley described him as he steadied himself for the single most important strike of a football in his career, Terry "is the captain, the heart and soul of the football club".

But he missed. He slipped. The ground, damp from the evening's steady rain, gave way underneath his foot and he guided the ball onto Edwin van der Sar's left-hand post, with the goalkeeper stranded in the opposite corner.

For those unable to watch the kick, Terry's face told the whole story. Immediately he sunk his head between his legs, almost in the foetal position as he tried to comprehend what had just happened.

United went on to win the shoot-out and lift their second Champions League trophy while Chelsea are still searching for their first.

In December 2009, Terry was accused of accepting cash sums of £10,000 to guide visitors around the Chelsea training ground by a Sunday newspaper. Once confronted with the claim, the footballer insisted the money was donated to charity, but video footage later surfaced that showed Terry proclaiming that Chelsea were unaware of the tours.

The club and then manager Carlo Ancelotti released a statement supporting their captain and no further action was taken.

Following the lifting of a super-injunction in January 2010, the 31-year-old was revealed to have had an affair with Vanessa Perroncel, the ex-girlfriend of former club and international team-mate Wayne Bridge.

The revelations led to Terry being stripped of the England captaincy on 5 February and Bridge resigning from international duty due to his position in the squad becoming "untenable and potentially divisive".

The pair met face-to-face just days later on 27 February when Bridge refused the offer of a traditional pre-game handshake from the Chelsea captain. 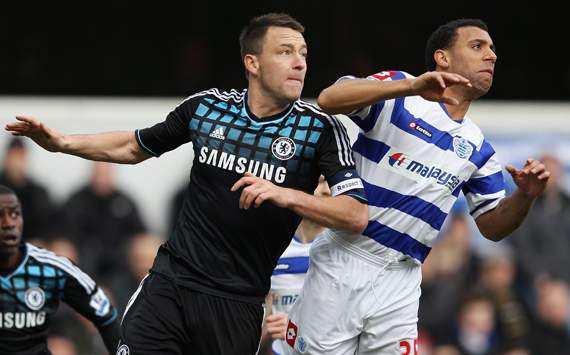 Following Terry’s loss of the captaincy, Rio Ferdinand was chosen to wear the armband by  England head coach Fabio Capello, although Ferdinand suffered from back and groin problems for much of his tenure. This unreliable availability led to Fabio Capello reinstating Terry as captain on 16 March 2011, announcing at the time that a year without the armband had been sufficient "punishment".

Just days after Liverpool’s Luis Suarez was accused of racially abusing Manchester United’s Patrice Evra during a game, Anton Ferdinand claimed Terry had racially abused him during QPR's clash against Chelsea on 23 October. Terry immediately denied the accusations, describing the incident as a “misunderstanding”, and welcomed a probe into the matter by the FA.

HANDSHAKES WAIVED AHEAD OF CUP TIE

Deja vu struck again on 28 January 2012 when the accused was due to meet the accuser as Terry's Chelsea visited QPR in the FA Cup fourth round.

Hoping to avoid a repetition of the embarrassing Wayne Bridge refusual, both clubs issued a joint statement in the lead-up to the game calling for peace and a "celebration of football" rather than a heated affair.

Rumours circulated before the game that the entire QPR team would refuse to shake Terry's hand so, mere hours before kick-off, the FA announced that the traditional pre-match handshake ritual between the two teams was cancelled in an attempt to "to defuse further tensions".

Terry pleaded not guilty to a "racially aggravated public order offence" charge regarding the Ferdinand case at the preliminary hearing. The trial has been set for a July start.

Due to the upcoming Euro 2012 tournament in June, the FA felt it necessary to strip Terry of the captaincy for the second time on 3 February, citing “the additional demands and requirements expected of the captain leading into and during a tournament”, and pending the conclusion of the trial.

The FA stressed that the decision “in no way infers any suggestion of guilt in relation to the charge made against” Terry.