Up until January, Goal.com will publish exclusive extracts from Graham Hunter's new book on Barca. In this second piece, he looks at a shift in power and a unique election ploy
Sandro Rosell and Joan Laporta, present and former presidents of Barcelona, are bitter enemies today, but it was Rosell, with one of the greatest public relations coups in football history, that took Laporta to the Camp Nou – if not David Beckham
BARCA: THE MAKING OF THE GREATEST TEAM IN THE WORLD
EBOOK OUT CHRISTMAS DAY, 2011. PUBLISHED JANUARY 2012 BY BACKPAGE PRESS

"Under Laporta there were two years when there was a complete lack of governance. People don't change as the years go on, they just expose themselves more."
Sandro Rosell, Barcelona president

"The board are a group of cowards and shameless liars. They have tried to destroy our image with hate, envy and resentment."
Joan Laporta, former Barcelona president


On June 10, 2003, a blisteringly sunny day, those of us covering the presidential election of FC Barcelona filed into Joan Laporta’s Passeig de Gracia campaign offices ready for what we had been told would be a major announcement.

For months, I had been reporting that the deal between Real Madrid, Manchester United and David Beckham was complete. A price had been agreed that spring, during a meeting between Jose Angel Sanchez of Madrid and David Gill and Peter Kenyon of United, on the island of Menorca. Beckham’s people, free to negotiate with Madrid, had done so to their satisfaction.

However, because the deal had not yet been closed, Beckham was, in theory at least, on the market.

“I can announce that we have agreed a price with Manchester United to buy David Beckham,” Laporta told us that day. Behind him was a screen on to which was being projected an official Manchester United statement, confirming exactly that. 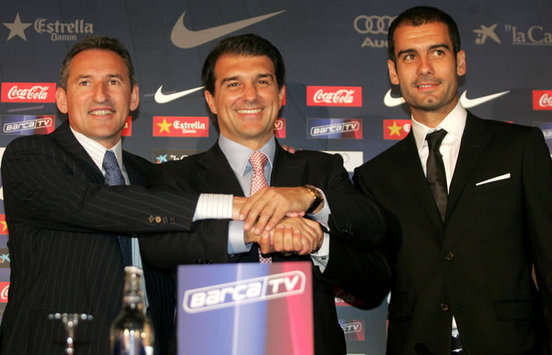 The presidential candidate wouldn’t answer questions about the price, but handed the floor over to Sandro Rosell, his prospective vice-president of football, so that the man who had negotiated the deal could take the credit for it.

A flood of disbelieving questions.

“How will you persuade him not to go to Madrid?”
“Is he the right type of player for your technical project?”
“Does the coach you have approached actually want him?”
“Is he just a marketing signing?”

Rosell batted all of these away with calm, slick answers.

From the outset, it was a sleight-of-hand trick. Beckham was set on going to Madrid, Barcelona were struggling in the league and offered no guarantee of Champions League football. Yet it worked perfectly.

Laporta had sold the voters what they wanted to believe – that Barcelona, failing on and off the pitch under previous president Joan Gaspart and later interim chiefs Enric Rayner and Joan Trayter - could once more be big hitters on the European scene under this young, vibrant team of businessmen.


Marc Ingla was there that day and would go on to become vice-president of marketing once the landslide vote was won. Like all of Laporta's team, he was young and successful, having made his fortune with an international telecommunications consultancy.

“When we announced the Beckham deal, we had edged ahead of our opposition in the polls,” he told me. “That momentum had been built, but the Beckham deal certainly fostered our majority, because it gave us credibility: ‘These guys can go to Manchester and sign the ‘rockstar’ player'.

“Sandro Rosell was very involved in those dealings and I believe his very good relationship with Florentino Perez helped this situation to go forward.

“It was half a deal. Sandro made his game behind the scenes with all parties.”

Sandro Rosell and Florentino Perez, the two-time president of Real Madrid had (and to an extent still have) a long-standing relationship of mutual respect, even friendship.


Beckham to Madrid was a done deal. Real Madrid were in the driving seat, yet here were their historic rivals announcing a transfer price for Beckham with Barcelona - if Laporta won the presidential race. Yet there were no angry rebuttals from Madrid, nor were there attempts from the Bernabeu to discredit the Laporta deal for Beckham. The waters were pacific, a spirit of brotherly love existed for that brief moment between the announcement of the deal and the Barcelona elections.

If Perez’s friendly relations with Rosell were enough to persuade him not to attack the announcement, to allow the quickness of hand to deceive the voters’ eyes, then it certainly helped. However, it was an error that would lead to a shift of power from Madrid to Catalonia.

The incendiary effect of this announcement catapulted Laporta to victory and Barça back to greatness. Beckham never did play for Barcelona, but under Laporta and then Rosell, they would usurp Madrid to become the world's greatest football team.

With every extract published, Goal.com will be giving away one copy of Graham Hunter's new book. To have a chance of winning an ebook or hard copy of Barca - The Making of the Greatest Team in the World, answer the following question: Which big-name player did Barca famously sign instead of Beckham? Send answers to competitions@goal.com - the winner will be announced in next Friday's extract.