Muslera's save cast Carlitos into the role of villain for the first time in Argentine eyes, and came back to haunt the coach who never wanted him there in the first place
COMMENT
By Daniel Edwards

As the Uruguayans rushed to mob penalty hero Martin Caceres and the Charrua section of Santa Fe erupted in flares and song, there were two figures in the Argentine camp more dejected than anyone else. Carlos Tevez, the man who saw his penalty saved by Fernando Muslera to put his team on the back foot and Sergio Batista, the coach who was convinced Carlitos should not be at the Copa America before going back on his decision.

Of course, a penalty miss can happen to any player at any time - just ask the normally lethal Radamel Falcao, whose error was equally devastating for a Colombia team that join the hosts in watching from the sidelines. There is, however, a special kind of irony that the player who ‘Checho’ was convinced did not function in his system, the player brought back almost by popular demand, the player who had failed to convince all tournament, was the man who sealed his side’s disappointing exit.

In the game itself, Tevez was a somewhat peripheral figure after entering in the final minutes, doing little to either help or hinder the Argentine efforts to break a deadlock established in the opening salvos of the match. Gonzalo Higuain scored a lovely header for the equaliser, but was also guilty of wasting several gilt-edged opportunities to put his side in advantage.

Unlike Costa Rica, though, Uruguay were in no mood to forgive these errors, and the honest, disciplined team marshalled by Oscar Tabarez fully deserve to be in the semi-finals after frustrating their neighbours and rivals with 10 men on the field in regulation time. 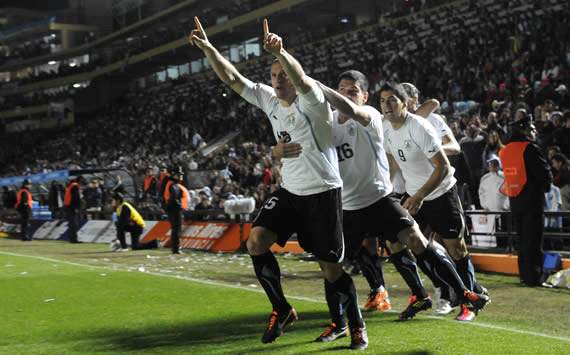 It will be the Manchester City player who takes all the headlines though, and the miss caps an awful tournament for the ‘Fort Apache’ kid who is the undoubted man of the people in Buenos Aires. It was their pressure, and the urgings of fellow heavyweights such as Diego Maradona who seemingly convinced Batista to change his mind and include Carlitos, even though the coach had made it clear that in his eyes, he could not function in the system Argentina proposed to play.

It would appear that, in this supposition anyway, 'Checho' was spot on. Tevez started the Copa as first choice alongside Lionel Messi and Ezequiel Lavezzi up front, an attack which would be the envy of almost any nation or club. Together though, the trio never impressed, and it took two turgid draws to force the conservative trainer’s hand and take out the player he never wanted in the first place. Bitter, bitter irony once more, what in Argentina is termed Amargura, and what player, coach and fans alike are left with after the cruellest of exits against their Rioplatense rivals.

The question will be what happens now, and the most probable answer is: very little. A number of fans left the ‘Elephant’s Graveyard’ cursing Batista’s name and in truth the Olympic-winning coach did little to impress in his first competitive test. Julio Grondona and the AFA, though, are conservative with the smallest ‘c’ when it comes to their men in the dug-out. Unless he decides to walk, and it is incredibly difficult to imagine that eventuality, Sergio will stay in charge to lead his team into the World Cup qualifiers later this year.

The future of Tevez, however, is rather less clear-cut. He was the big gamble in the Albiceleste line-up and now, thanks to a twist of fate, destined to be regarded as its biggest failure. ‘Checho’ will continue to seek a winning formula based on the patient passing of Barcelona, working through Messi as the withdrawn no. 9. The failure of this system in the first two matches will not halt that process, and while it is far from certain if Argentina will be able to implement it with any resemblance to Pep Guardiola’s men, the coach is right to state that it needs time and training to have a chance.

This then will leave the Manchester City man definitively in the cold. He had the opportunity to prove himself a worthy associate of the incomparable Messi in attack and could not grasp it, and as he watched his penalty being batted away to the delight of the Celeste crowd, the striker saw his last chance to prove himself in the tournament fly away in a cruel instance of poetic justice.