After two sub-standard outings in this year's Copa America, the hosts finally found their rhythm - thanks to the adoption of 'El Diego's no-holds-barred attack
COMMENT
By Daniel Edwards in Cordoba

Out of the many conflicts and disputes that inform football discussion, one of the most fundamental is the role of tactics despite, at its heart, the game simply consisting of kicking a leather ball into a net more times than the 11 players opposite. Many coaches swear by their tactical diagrams, and minutely plan every play and passage according to how they wish to see their players give, receive and follow the ball.

Others opt for a more organic approach, and prefer to let those on the pitch dictate how a match develops. The understanding here is that the players will react to the circumstances around them and excel under the freedom, linking intelligently with their team-mates without the need for a trainer to bark orders at them.

There is no doubt that Sergio Batista falls into this first category; a planner by heart, 'Checho' has, more than anything, been seduced by Barcelona's dynamic pressing and passing game, that necessitates hours of practice on the training field as well as an intimate understanding between the 11 men entrusted to execute it. Until last night in the Copa America, however, his Argentina had failed to reach anything like the level demonstrated by the Catalan giants.

A shambolic draw against Bolivia was followed by a timid display in Santa Fe against the uncompromising Colombians, who left Batista's master plans in pieces across the field of the 'Elephant's Graveyard'. The supposed ace in the hole, playing Lionel Messi as a withdrawn No.9, appeared to fail almost without salvation, as the player recognised as the best in the world looked a shadow of his usual self in the first two matches. The tournament favourites were one step away from a humiliating first round elimination.

If you cannot imitate the best, then it may be time to try something a little more unorthodox. The Seleccion looked immeasurably better in taking apart Costa Rica 3-0 in the Estadio Mario Alberto Kempes, and ironically, the 'system' used to achieve it looked uncannily similar to that employed by 'Checho's' predecessor, one Diego Maradona.

In the World Cup especially, it was not so much the system as the seeming lack of one that made Argentina one of the most entertaining sides to watch in the early stages, and it was this team that took the field in Cordoba last night. Batista gambled in playing four forwards, plus Fernando Gago in an advanced midfield position, and it could not have paid off more, as despite scores of missed chances the Argentines ripped Costa Rica to pieces. 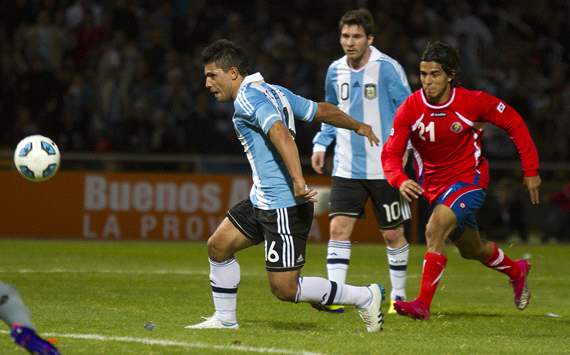 One player who especially revelled in his altered role was Messi, back pulling the strings at No.10 just behind three forwards who constantly switched positions, moved at will across the pitch and were always available. 'La Pulga' was involved in all three goals, and although he could not add his name to the scoresheet, he provided two delightful final passes in the second half to prove that while form is temporary, class and talent are permanent.

Meanwhile, Sergio Aguero - of course, the son-in-law of Maradona - took full advantage of playing alongside the phenomenon, notching two goals in addition to his equaliser against Bolivia to become top-scorer in the competition. Not bad, for someone who started for the first time in the final group match. Gonzalo Higuain could certainly take some shooting advice from his cross-town rival. The Real Madrid man did more than anyone to keep the score respectable with a string of glorious missed chances, but the mere fact that they were being created for the first time in the tournament is a big positive for the home team.

Argentina fans, of course, should by no means get carried away. Costa Rica brought an U22 team to the Copa due to issues with player release, and although Ricardo La Volpe's boys have done themselves proud so far in the tournament anything less than a win was unthinkable for the hosts. The style and verve with which the Albiceleste played, however - especially in the second half - deserves to be commended, and should serve as a valuable lesson to Batista.

There is a time for minute planning and diagrams, but blessed with half a dozen of the best forwards in the world, sometimes it pays to take a leaf out of 'El Diego's' book - and just leave them to it.