By Subhankar Mondal
Goal.com’s Subhankar Mondal illustrates why the Spanish champions are desperate for their main striker to regain his form
Of their last 11 competitive games Barcelona have won eight, drawn two and lost just one. Among the eight victories, there were comprehensive home wins over Arsenal and Shakhtar Donetsk in the Champions League and the two drawn games both arrived in difficult environments – against Sevilla at the Sanchez Pizjuan and Real Madrid at the Bernabeu.

The only loss Pep Guardiola’s team has suffered during this run came in the Copa del Rey final on Wednesday evening, following a 103rd minute header from Cristiano Ronaldo.

On the face of it, this is not entirely a bad record. Granted, Barcelona lost in the final, but during this period they have reached the semi-finals of the Champions League for the fourth season in a row and have also virtually sewn up the Primera Division for the third year in succession. That is one piece of silverware all but guaranteed, taking Guardiola’s trophy haul since joining the club as coach in 2008 to nine. 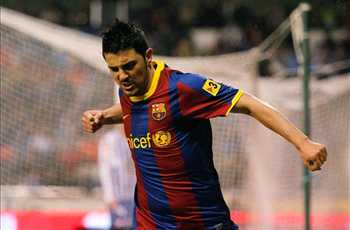 Yet during their last 11 matches Barcelona have scored just 19 goals, and eight of them against Arsenal and Shakhtar – that’s 11 goals in the other nine games, just over one goal per match.

And none have been scored by David Villa.

Signed from Valencia last summer for €40 million, Villa is on a horrid run of form. The Spain international striker has failed to find the target since the end of February and has directly created just one goal since then. Seventeen goals in 31 league matches and three goals in nine Champions League fixtures are notable records, but none in 11 games is worrying.

Not that you can blame Villa entirely. After all, the 29-year-old has been deployed generally on the left side of the attacking trident with Pedro on the right and Lionel Messi playing as the centre-forward. Villa has played on the left with some distinction – as he did with Valencia on occasions and also during the World Cup for Spain last summer – but deploying him away from his natural role takes away the edge from his scoring prowess.

In his last 11 matches for Barcelona, Villa has failed to perform. In none of the games has he been rated 7.0 or above by Goal.com – his average rating is under 6, terribly underpar.

And Villa knows it just as much as anyone, confessing: "Like everybody else, I'm now starting to worry about my goal drought as well. There's not really much I can do to get back my scoring boots except keep working very hard."

The Copa del Rey final at the Mestalla was only the third occasion this season that Barcelona failed to score.

It came against their direct rivals for the Champions League and is certainly worrying for a team that have hit five goals or more on 10 occasions this term.

Barcelona have scored just two goals in their last three matches despite having most of their first choice players on the pitch, and this means that Villa needs to regain his form right away.

The Catalans' next game is against relegation-threatened Osasuna on Saturday evening and one suspects that they will win it. Even if they don’t, they are going to win the league anyway.

The real challenge will be against Madrid in the first leg of their semi-final tie at the Bernabeu next week and Barca need Villa to be firing on all cylinders by then.

If he isn't, and he fails to score again, not only will his place in the first team come into question but his side will also find it all that more difficult to fulfill their potential by progressing to a third Champions League final in six attempts.

But if he can regain his form, his focus and those illusive goalscoring boots, he could be the man to lead the Blaugrana past their bitter rivals and at the same time justify Pep Guardiola's patience as well as the hierarchy's decision to splash the cash last summer.