By Stefan Coerts
Goal.com's Stefan Coerts hails Netherlands' impressive performance against Hungary and labels Oranje 'the Barcelona of international football'.
In the modern game, Barcelona set the standard of how football's supposed to be played these days. The Blaugrana have been the dominant side at club level over the past few seasons and have won pretty much every trophy going. Aside from being hugely successful, Barcelona are also one of the most attractive teams to watch with their expressive tiki-taka brand of play.

Barcelona's success hasn't gone unnoticed elsewhere and many coaches are trying to let their respective teams play in similar fashion. Obviously, this is not an easy task and only few teams have succeeded to - partially - copy the Catalans' attacking football. In club football, Udinese are one of the teams who have managed to impress, while Spain are often considered to be 'the Barcelona of international football' because of the big Catalan influences in the team.

However, after Friday's Euro 2012 qualifier between Hungary and Netherlands, there seems to be only one international team worthy of the title 'the Barcelona of international football' and that's Oranje. Holland's national side first made an impact on world football when they introduced 'total football' in the early 1970s and the match in Budapest suggests that Netherlands are ready to make the world fall in love with them all over again.

National team coach Bert van Marwijk had to make do without the services key players such as Maarten Stekelenburg, Mark van Bommel, Arjen Robben and Klaas-Jan Huntelaar and many expected the World Cup finalists to struggle in the away game against Hungary. How wrong the doubters were.

Hungary started the match with attacking intentions and clearly had a feeling that they could get a good result. Nevertheless, a flash of brilliance from Wesley Sneijder after only eight minutes of play effectively ended Hungary's chances of causing an upset. The Inter playmaker picked up a loose ball in midfield, dribbled past an opponent and then set up Rafael van der Vaart for the opener with a brilliant through pass.

From there on, Oranje only got better and better. They were unlucky not to double their lead on the half hour mark when Ibrahim Afellay fired his shot wide after a great attack, but the Barcelona star did add his name to the score sheet in the dying seconds in the first half after yet another superb attacking move. Second half goals from Dirk Kuyt and Robin van Persie eventually helped Van Marwijk's men to a fully deserved 4-0 victory. 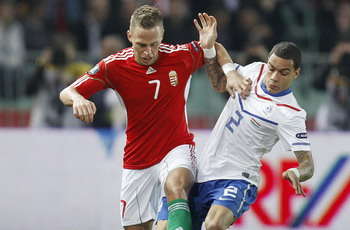 It wasn't so much the final result that was so impressive as it was the way how Holland cruised to victory. They dominated play right from the start and created chances at will. Afellay went past his direct opponent time and time again on the left wing, while Van Persie often dropped deep to make himself available and create space for his team-mates. At the back, Gregory van der Wiel put in his best performance of the season as he was involved in two of Holland's four goals, while he was never troubled defensively.

The driving force behind Holland's Barcelona-esque performance was not any of the aforementioned players though as it was Oranje's midfield that excelled in Budapest. Van Marwijk opted to field both Van der Vaart and Sneijder and played with Nigel de Jong as his side's only holding midfielder.

Sneijder and Van der Vaart proved their coach right with outstanding performances. The Inter star's passing was world-class, while Van der Vaart was all over the pitch to build up play, tackle opponents, set up team-mates and even open the scoring. The former Ajax stars' link up play was remarkably similar to the way Xavi and Andres Iniesta have an eye for each other at Barcelona and they have now made it clear for once and for all that they can definitely play together.

Both sides meet again in the Amsterdam ArenA on Tuesday 29 March and the Hungarians will be wondering what they can do to prevent another humiliation. It seems as if the Dutch have set their sights on the Euro 2012 title and Netherlands in their current form seem pretty much unstoppable. Not a pleasant thought for Hungary coach Sandor Egervari in the build-up toward the match in Amsterdam.