By Subhankar Mondal
Goal.com's Subhankar Mondal explains how Busquets is more suited to the Blaugrana's midfield than the Argentine...
Sergio Busquets divides opinions. Well, at least he did. Lanky and seemingly fragile, the Barcelona number 16 has often been considered a weak member of the team, a brittle, shaky defensive midfielder whose anchoring skills in the middle of the pitch raise concerns.

Those doubts came to the fore vividly at the 2010 World Cup finals in South Africa when it became clear that he was struggling to perform as Spain's linchpin. When coach Vicente del Bosque dropped the dysfunctional Fernando Torres from the line-up and employed an additional midfielder beside him, la Furia Roja appeared more coherent and assured, and even last season at Barcelona, the notion was that the front-five shielded Busquets more than he protected the back-four.

But Pep Guardiola has since made Busquets a regular fixture in his team. He gave the 22-year-old his debut in La Liga in September 2008 and maintained the confidence and faith in him to ensure his is one of the first names on the team sheet. 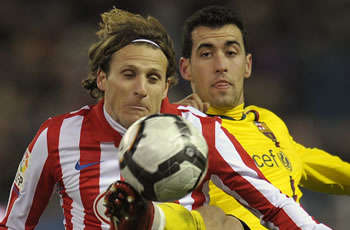 Even with the summer arrival of Javier Mascherano from Liverpool, Busquets has retained the role of first-choice defensive midfielder. In a recent interview with The Guardian, Xavi hailed his compatriot as “the best midfielder there is, playing one-touch”.

His influence proved to be pivotal in the Spanish champions’ triumph over Valencia at the Mestalla on Wednesday evening; he commenced the encounter as part of a three-man central defensive unit alongside Gerard Pique and Eric Abidal. Dani Alves and Adriano were deployed as auxiliary wing-backs, with Mascherano as the lone holding player in the middle of the park.

It was a deviance from Guardiola’s tried, tested and massively successful 4-3-3 formation and it failed. Mascherano, while equally adept at breaking up opposition attacks as Busquets, doesn’t have the one-touch football skills that the latter has and Barca lacked the momentum to go forward with confidence. Valencia pressed them and, for long spells, matched them.

Just after the hour-mark, however, Guardiola made the vital switch, withdrawing Mascherano, in favour of Pedro and pushed Busquets forward into midfield, with their conventional 4-3-3 set-up once again taking shape.

There was width down the flanks, the front pairing of Lionel Messi and David Villa become a trio with the addition of Pedro on the right, and Barca started to asphyxiate Valencia. Messi eventually netted the winner, and although it was perhaps a somewhat fortunate victory in the sense that Guardiola's tactics had been questionable from kick-off, it was constructed on perseverance and persistence that was triggered by reintroducing Busquets to the central area.

Now, this isn’t to suggest that Mascherano isn't good enough for the Blaugrana; the point is that the Argentine hasn’t managed to slot in Barca’s 4-3-3 template and has often looked out of place and out of sorts. True, there have been games when the former Corinthians and West Ham United star has played brilliantly, but more often than not he has struggled.

As good a player as Mascherano is, he hasn’t been indoctrinated into Barca’s system. As Xavi explains: “When you arrive at Barca, the first thing they teach you is, think. Think, think, think. Quickly. Lift your head up, move, see, think. Look before you get the ball. If you're getting the pass, look to see if that guy is free. First time.”

So far, the 26-year-old has failed to grasp this idea.

Busquets’ role in defensive midfield is to be the pivot from which to push forward, to keep the team ticking and play in the oppositions’ half, and Mascherano has yet to substitute him there. He is a newcomer to Barca’s system while Busquets is, essentially, a veteran.

Perhaps against Valencia Guardiola was trying to manufacture a defensive unit with an eye on their encounter with Arsenal. With Carles Puyol still recovering and Pique suspended for the second-leg encounter of their last-16 clash at Camp Nou, the 40-year-old does have problems at the back, and Busquets is a viable solution. The World Cup winner has featured in the back four before with considerable success.

The problem is that Busquets has no replacement as the anchorman in midfield. Mascherano remains the logical alternative, and while he does have the advantage of having played in the Premier League, where he is used to the pace and intensity that Barca were intimidated by in the second-half against Arsenal at the Emirates last month, Busquets remains fundamental.

He is as important to the three-time European champions’ system under Guardiola as Puyol is at the back and Messi is in attack - which makes it all the more tough for Pep to solve the dilemma and prepare his team ahead of the Arsenal test next week.