By Martyn Fisher
Martyn Fisher analyses the home side's ability to take advantage of die Schwaben mistakes...
A brace from Didier Ya Konan punished two defensive mistakes as Hannover moved into second place. As a result, Stuttgart will be stuck in the bottom three over the winter break.

Stuttgart came into this game as the only team who hadn't won away from home in the Bundesliga this season, and knew that a victory wouldn't even be enough to lift them out of the drop zone. Hannover, on the other hand, went into the game knowing that a win would give them a new club record of five consecutive victories.

Unsurprisingly, it was the home side who started like the team gunning for a place on the podium. They pressed high and hard from the off, and Konstantin Rausch instantly forced a mistake from Philipp Degen as Stuttgart enacted some of the laziest opposition-sucking keep-ball you'll ever see. 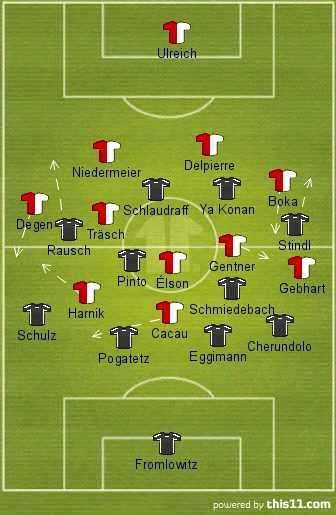 
Mirko Slomka kept his 4-4-2 close together even when they were pressing, and this ensured that Stuttgart's banks were forced to stand further back in order to get a bit of space. In terms of attacking, the away side were forced to use the flanks. Arthur Boka, Timo Gebhart and Christian Gentner linked up and carried in turns down the left, looking to feed the last shoulder-lurking Cacau.

Hannover were also intent on attacking down the left, but they were only able to surge forward on the break. A better footballing side would have been more comfortable with using the ball to prise open the Stuttgart defence, but Hannover aren't a technically-gifted unit, and this allowed Stuttgart to creep higher as the game went on and keep them penned in and dawdling.

Subsequently, this led to a blur of bodies and minimal control of the ball from either side, but with the Stuttgart defence pushing up to the halfway line, Hannover now had the chance to launch Rausch or Jan Schlaudraff down the left with even more space to exploit.

Even when the 96ers gained this territorial advantage (often via a silky pass from Didier Ya Konan), that old technical ineptitude problem caught up with them again and resulted in a wayward shot, or a poor/delayed ball into the box.

Martin Harnik was one of Stuttgart's most important players in the opening 15 minutes. He worked his socks off chasing back and hounding pass-assessing defenders, and looked to veer inside when his side attacked to get on the end of one of Elson's - infrequent - through-passes.

You'd have thought the Brazilian would have been keen to make an impact on this game having spent a successful spell on loan at Hannover last season, but his contribution will be best remembered for a series of wayward corner-kicks.

With Harnik helping Degen tighten things up on the right-side of the pitch, Hannover started to release their own right-sider, Lars Stindl, some more. With Boka often out of position, Stindl was dragging Matthieu Delpierre across and tearing a hole in the heart of the away side's defence. However, that final ball was again lacking when played diagonally to expose the gap, and Hannover weren't able to make the most of such opportunities.

At this point, the roles of home and away team were seemingly reversed - Stuttgart doing the running and bringing the football to Hannover, with the latter breaking on the former having willingly invited them on. It was Hannover who were getting the most promising shots on goal, however - the visitors were a little too adventurous when carrying the attack, always looking for the Hollywood pass, and thus leaving themselves open to a quickfire counter.

To be fair to Hannover, it wasn't just Stuttgart's sloppiness that allowed them to attack - they pressed the ball with ferocity, and made sure the first pass on the loose ball went forward by at least 15 yards.

From about the 25th minute, Slomka obviously grew weary of waiting for Jens Keller's side to come on to his, and started encouraging his side to invite some high pressing, and then play an aerial ball over the top. Despite this, the best opening of the match so far came just before the half hour when the ball was brought diagonally from the right, but too many players were allowed to touch it before a tame shot was parried by Sven Ulreich.

There was a certain irony in the fact that having been so good at launching quickly and then letting themselves down with neat passes in the final third, Hannover ruined this particular opening - carried forward by some tidy passes - because of a paucity of pace!

But in the 35th minute, they proved far more ruthless. Stuttgart were punished for some sloppy tease-passes in their own half, and the ball was looped over a non-existent defence for Manuel Schmiedebach's ghost into the defence, and after Boka just about poked the ball out of his reach, it landed for the oncoming Ya Konan through the left side of the box. The Ivory Coast international put past Ulreich for his eighth goal of the season.

The half concluded with the home side in the ascendancy. The Stuttgart defence was still being stretched far too easily, and Sergio Pinto - bottom pushed out, slow head-nodding runs... all the playmaker boxes checked - put through some telling passes to destroy it further.

All the while, Florian Fromlowitz continued to kick long - Slomka sensing his side stood to gain more by keeping their centre-backs deep (to stifle the high-lurking Cacau), and hitting the ball into the Stuttgart half where Hannover's higher energy levels ensured they were favourites to boss possession. 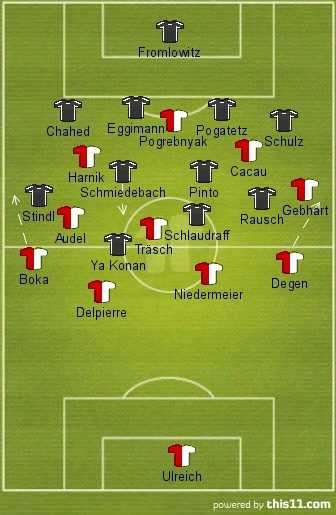 The 70th Minute; Hannover Still 1-0 Ahead

Elson was hauled off at the interval for Pavel Pogrebnyak. The Stuttgart system changed accordingly - a 4-2-2-2 now being deployed. But the away side, realising this was all-or-nothing territory, soon began to inject some urgency. Just like several occasions in the first half, they showed signs of their quick thought and feet on the edge of the box, but sent their shots high, wide, and (not so) mighty.

Cacau was growing into the game, and relishing the chance to play in the space created for him by his bulky Russian colleague. Bursting and brimming from deep, the Germany international began to stretch the home side's defence by running at them regularly.

Of course, it's all well and good injecting some energy into your attacks, but urgency doesn't always work so well in the defensive department - as epitomised by two successive Hannover breaks which resulted in a free-kick on the edge just outside the D, and then one minute later, Pinto being 'felled' in the box (no yellow card or penalty from the ref for the dive). It was still a bit stodgy from Hannover in attack generally though, but Schmiedebach showed glimpses of his ability by testing Ulreich on two occasions.

If I referred to it as all-or-nothing for Stuttgart at the start of the second half, it really was that way as the last twenty minutes approached with Keller now opting to set his side up in a 4-3-3 (one with two wingers in the midfield bank of '3'!). As a result, Slomka was forced to push Schlaudraff deeper, ensuring the entrenched banks confronting the plethora of white and red shirted attackers had a bridge through which to reach the attack. Nevertheless, on one of their now rarer forays forward, the home side won a free kick in the D. Schlaudraff wasted this golden opportunity to kill the game, curling over the bar.

And boy, did it look like he was being made to pay. Stuttgart retained possession in the Hannover half from the subsequent restart, and won a free-kick (given away by Pinto). Johan Audel curled the set-piece towards the penalty spot, and George Niedermeier flicked a header over the exposed Fromlowitz who was flapping in no man's land.

Cue a mad 90-second passage of football. First, Degen had a great chance to hand the away side the lead, and Pogrebnyak was just inches away from connecting with the parry. But Hannover broke, and after winning a throw-in that saw the returned pass scooped over the high and static Stuttgart defence, Ya Konan took full advantage of the fact Boka was playing him onside to calmly push the ball under the helpless Ulreich.

How Hannover didn't add to their tally in the last few minutes is a mystery. Substitute Mike Hanke, Ya Konan, and Schmiedebach all spurned numerous one-on-one chances - the kind of misses which indicate that Hannover won't be able to compete with the bigger guns when push comes to shove.

But heck, they can enjoy life at the top while it lasts. And with their direct rivals for second spot Leverkusen and Mainz having to endure tough games tomorrow, they might be able to enjoy for it a week longer yet.