Ahead of Sunday's much-awaited Rome derby, Vince Masiello looks at five classic matches between the bitter rivals over the past fifteen years...
Lazio 3-3 Roma November 29, 1998

Roma and Lazio played out a cracking encounter on November 29, 1998. The Lupi were coming off four defeats on the bounce in Derbies and were desperate to avoid another major disappointment.

It was a real blockbuster as Roma took the lead through Marco Delvecchio in the first period only for ex-Inter boss Roberto Mancini to equalize three minutes later. Zdenek Zeman's men then fell behind to another Mancio strike in the second half and a naive Pierre Wome foul gifted the Aquile a spot-kick that Chilean Marcelo Salas tucked away.

Just three minutes later Fabio Petruzzi saw red for a second bookable offence, but Roma held their nerve and completed an incredible comeback in the last ten minutes courtesy of Eusebio Di Francesco and Totti's first ever goal in a Derby della Capitale.

And Delvecchio thought he had given his side the win late on, but referee Stefano Farina chalked off his effort for a dubious offside.

The Biancocelesti had a stellar 1998-99 season and were hot favourites to clinch the Scudetto after going seven points clear at the top of the table during the second round of fixtures.

But they ended up shooting themselves in the foot, incredibly throwing away their lead and losing to Milan by a single point. The Rome Derby on April 11 certainly played a big role, as the Giallorossi triumphed 3-1, severely denting the Laziali’s ambitions. 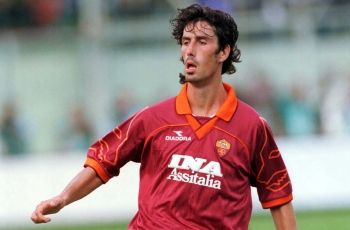 The Eternal City outfit had been awaiting a home win in the Derby for 22 years, and a Marco Delvecchio brace in the first half soon set the Lupi on the right track.

Christian Vieri pulled one back in the second period, but a Francesco Totti strike in the final seconds sealed the tie and Er Pupone went on to display his famous "Vi ho purgato ancora" T-shirt.

The Laziali, coached by Alberto Zaccheroni, registered their worst home loss against the Lupi on March 10, 2002.

Fabio Capello's Roma took the lead just 13 minutes in, with Totti releasing Vincent Candela with a fabulous back-heel flick and the Frenchman's cross was headed in by Vincenzo Montella who out-jumped Alessandro Nesta.

That was just the start of a memorable night for the Aeroplanino, as he ended up bagging three more goals, whereas the centre-back had one of the worst performances of his career.

The Laziali captain was clearly responsible for at least two other goals, but after Dejan Stankovic had restored some hope in the Biancocelesti camp at the start of the second half, Er Pupone stole the show with a magnificent 'cucchiaio' from outside the penalty box.

Lazio legend Paolo Di Canio had a real epiphany on January 6, 2005, as he instinctively volleyed in a searching cross-field pass from Fabio Liverani after 30 minutes in the first half.

Antonio Cassano levelled the scores in the second half, but the Giallorossi, managed by current Atalanta boss Gigi Delneri, conceded again just six minutes later when left-back Cesar unleashed a powerful angled drive from inside the box to beat Angelo Peruzzi. 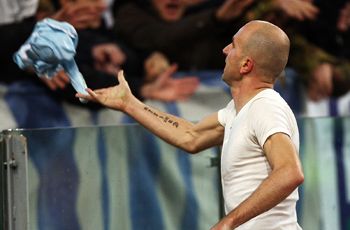 Tommaso Rocchi rounded off the scoreline late on, going past 'Tyson' with a brilliant move before tapping the ball into an empty net.

Unfortunately, Di Canio ruined his virtuoso performance and caused controversy after the encounter by flashing the fascist salute to his team's far-right fans.

The Biancocelesti managed their biggest ever win in a Derby della Capitale on December 10, 2006.

It was the first post-Calciopoli era meeting between the Rome arch- rivals, and Delio Rossi's men taught the Giallorossi a superb lesson.

Referee Roberto Rosetti was about to blow the whistle to end the first half when Argentine Cristian Ledesma let fly from over 20 yards with an unstoppable shot that left goalkeeper Doni rooted to the spot.

Captain Massimo Oddo then stepped up to bury a penalty awarded for a foul on Macedonian hitman Goran Pandev, and Massimo Mutarelli put the final nail in the Lupi's coffin with a spectacular half-volley strike from close range, after Stefano Mauri's effort had hit the crossbar.

Hopefully this season's first derby will be another classic.