By Carlo Garganese
As Lazio continue to lead the way in Serie A, Carlo Garganese asks whether the Biancocelesti can really realistically challenge for the title this season...
So, with a fifth of the Serie A season already completed who would have predicted Lazio to be flying high at the top of the table? Having tinkered with relegation last term, eventually finishing in 12th place, expectations were not particularly lofty going into 2010/11.

But the Biancocelesti’s fourth consecutive win yesterday afternoon - a 2-1 home victory against Cagliari – means the club have made their best ever start to a Serie A campaign, better than the Scudetto-winning squads from 1974 and 2000. Edy Reja’s men are four points clear of second placed Inter, although Milan could close the gap to two points should they win their game in hand at Napoli tonight.

Lazio’s success so far has been down to a number of factors. First and foremost, in Reja the Aquile possess the most under-rated coach on the peninsula. Shrewd and tactically smart, just like his lifelong friend Fabio Capello whom he played with at SPAL in the 1960s, in just eight months at the Stadio Olimpico Reja has managed to construct a team with identity and an important mix of technical and physical qualities. 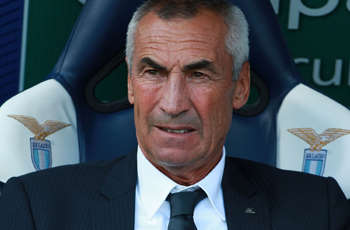 Having also masterminded Napoli’s return to the big time with successive promotions, the 65-year-old certainly deserves more credit than he has often been afforded since his late arrival to the glamour of Serie A.

On paper, Lazio’s defence doesn’t appear too strong. But in front of the talented, if occasionally inconsistent goalkeeper Nestor Muslera, Reja has organised a solid, well-drilled unit - with the third best record in the league - led by the 31-year-old Brazilian Andre Dias, who has been a rock at the back since his January arrival from Sao Paulo. Deep in midfield, Cristian Ledesma is finally justifying his until-now excessively high reputation by dictating the play and orchestrating attacks.

Yet it is the furthermost four of Stefano Mauri, Hernanes, Sergio Floccari and Mauro Zarate, particularly the former three, who have really done all the damage. Mauri has been reborn this season, with three goals and a host of assists, even earning a recall to the Italy national team in the process. Hernanes looks like being the signing of the summer, locating space in the trequartista position to create, score and unleash more shots than anyone else in the league. Zarate has yet to return to the lofty heights of two seasons ago, but in Reja he has found a coach who knows how to use him for the tactical benefit of the team.

And if Reja is the most under-rated coach in Serie A, then Floccari is the most under-rated forward. Since joining Lazio in January, the 28-year-old has scored 12 goals in 24 appearances, many of them decisive. He is as complete a frontman as you are likely to find, far superior to Roma’s Marco Borriello, and should be a regular in the Italy squad in this kind of form.


So can Lazio maintain this stunning start and really challenge Inter and Milan for the Scudetto?

It is highly unlikely, but stranger things have happened. With Serie A at its most competitive for perhaps 15 years, there are many people who believe that 70-75 points could be enough to win the title. If this proves to be the case, then it certainly opens the door for a less fashionable side like Lazio should they be able to string together a few winning runs during the season.

The capital-outfit are certainly helped by the fact they are not in Europe. One only needs to review this past weekend's results to see what a negative effect playing twice a week has physically. Roma tied with bottom-club Parma, Juventus failed to score against 18th placed Bologna, Inter and Sampdoria cancelled each other out in a 1-1 draw, while an unrecognisable Palermo lost at struggling Udinese.

The key to a successful season for Lazio will probably hinge on them keeping the afforementioned key players fit. While there is a degree of depth in midfield and attack, with the likes of Tommaso Rocchi, Pasquale Foggia, Matuzalem and Mark Bresciano only squad rotation players, the Biancocelesti simply cannot compete for numbers with Inter, Milan and even Juventus.

We will learn more about just how well Lazio can do this season during the next couple of rounds, as the Biancocelesti travel to Javier Pastore's exciting Palermo before locking horns with Roma in the Derby della Capitale. But for the time being Lazio should enjoy the good times, and who would begrudge their fans from dreaming about a Hernanes long-shot of a Scudetto?