By Cyrus C Malek
Goal.com's Cyrus C Malek wonders if the barrage of criticism levelled at the Czech is justified...

It happens at least once every season. An overzealous (some might argue reckless) defender takes a gamble he probably should not take, lunges for the ball, and inevitably catches a superstar's person instead. The star player crumples to the pitch, visibly in pain, and immediately one knows the injury suffered is something more than just a bruise.

The press, of course, has a field day. The challenge in question is broadcast over television screens; high-definition video replays are slowed frame by frame as commentators absurdly speculate what the defender may have been thinking with each passing millisecond; the front page of the daily tabloid displays a photograph taken at the precise moment of the challenge from the most gruesome angle; and the floodgates are opened in the debate as to whether stricter penalties should be levied upon wanton defending of football’s best players.

In Spain, the debate takes on a partisan element as well. Depending upon the superstar injured, the Barcelona and Madrid press begin to compare and contrast controversial challenges, discussing how the guilty party was punished by the referee, usually in an effort to imply some kind of refereeing conspiracy that favours one side over the other.

AS printed the most recent example of this kind of sensationalism earlier in the week as, in the wake of Tomas Ujfalusi's challenge on Lionel Messi in last weekend's match between Atletico Madrid and Barcelona, the pro-Madrid tabloid ran a piece comparing Ujfalusi's tackle to a similar-looking challenge by Barca's Dani Alves on Racing Santander's Toni Moral in February 2009. The point to be made, of course, was that Ujfalusi was shown a straight red and slapped with a two-match ban for his tackle on Messi, while Alves was not even shown a yellow for his tackle on Moral - a challenge that probably did deserve a sanction.

When Messi is on the receiving end of a hard challenge, the world turns its attention; this is the simple reality of being the premier footballer on the planet and every football publication begins to concern itself with La Pulga. But the same is also true for the defender that executed the challenge; he is placed in the opposite camp of course.

Since, delivering the wayward stomp on Messi’s ankle, Ujfalusi has been in the centre of a firestorm of attention. The Czech footballer has already been punished with a two-match ban for the cynical challenge, but some pundits have called for even more severe punishment, arguing that the Atleti defender could have ended the Argentine’s career.

The sensible reply to this is simple: that’s football. In football, players get hurt and that’s just a fact of the game. Discounting egregious acts on the part of defenders, the notion that a superstar player should be exempt from suffering fair attempts at competitive challenges runs counter to the principles of sport and fair play. 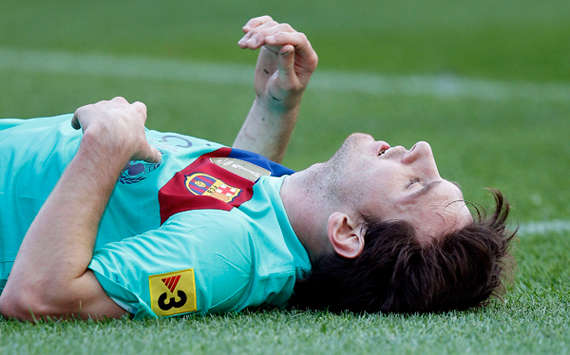 It is true, of course, that the best players are frequently subjected to more abuse than others, as their skills simply demand more attention from defenders. Conscious of this, referees must take a fair measure of care in punishing careless, haphazard defending, instead encouraging purposeful, calculated tackles that minimise risks of injury. Some might contend that this makes for a slippery slope argument, as referees may be overeager to blow for a foul on a superstar player than they would another.

But in managing a match, if an overly physical tackle is put in on a superstar player, it does a referee well to reprimand the defender with a harsh penalty, creating a disincentive for other players to take their shot. It is the fine line of judging when a tackle crosses the boundary from the realm of healthy physical competition into the world of cynical or malicious brutality, which is left up to interpretation.

Over the evolution of the modern game, the job of refereeing in football has become exceedingly more difficult. Players have become faster, bigger, stronger, more physical, and (in some cases) better actors. Without the aid of video replay and high-resolution photos (some of which make challenges look worse than they were in actuality at normal speed), the work of a referee is one of split-second decision-making based on information that must be processed in a very short amount of time.

The work of defenders has similarly become far more challenging, especially when one considers the ability of players such as Messi juxtaposed against that of defenders such as Ujfalusi. Yes, Ujfalusi’s challenge on Messi was abysmal and a red card was a just result. The two-match ban was also arguably well merited.

But the maelstrom of outrage that has come out of the Czech defender’s tackle is far from deserved. While the result of an injurious action, even if it happens during the normal course of a match, should always be punished, the actor’s purpose and intent behind the action should also factor into the penalty. In Ujfalusi’s case, it would be difficult to argue that the Czech’s purpose in bringing Messi down was driven by malice. Instead, it really amounted to nothing more than clumsiness. It could hardly be called sporting to penalise a defender for little more than ineptitude.