By Salvatore Landolina
Goal.com looks at the players who performed poorly in the third round of the Serie A calendar...
Worst XI

Samir Handanovic (Udinese): The Udinese goalkeeper, whilst being let down for the most part by his defence, never really offered the guarantees his bottom of the league side needed. Four flew past, and now Udinese, still with no points, are looking likely to face another long season.

Aleandro Rosi (Roma): The full back was simply no match for Bologna's Marco Di Vaio as inexperience lost against experience. He got caught on the wrong side of the striker for Bologna's first, and then he failed to mark him for the second, allowing him an easy tap-in. Things are not looking rosy for Rosi.

Cesare Bovo (Palermo): Bovo is a player who rises to the occasion - but not this time. He fell apart against Inter and looked clumsy. His lack of self-belief allowed the Nerazzurri confidence and time. He failed his defence, leading to Palermo's downfall.

Andrea Coda (Udinese): The centre-back's game hardly started, but ended on 18 minutes when he turned the ball into his own net under pressure from Leonardo Bonucci to give Juventus a lead. He never recovered after that as Udinese collapsed.

Giovanni Pasquale (Udinese): The left-back was out of touch on Sunday. He looked uncomfortable on the flank and was made to look silly by an in-form Milos Krasic. He struggled all game before being forced to come off.

Cristiano Zanetti (Fiorentina): Lazio had an easy day in midfield, and much of that is thanks to Zanetti. He hardly touched the ball, and gave away possession when he did. He looked tired on the whole.

Andrea Pirlo (Milan): Not a great night for the playmaker. He made too many errors when creating the play for his side. Unusual poor distribution too. He was called to cover far to often, meaning his creative play suffered. 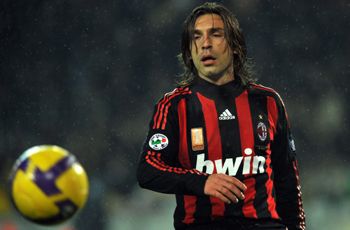 Frustration for Milan and Pir-low

Simone Perrotta (Roma): Not the player we saw in World Cup 2006. He seems to have lost all energy and drive. The Italian was motionless on the pitch against Bologna and it was his performance which led to the cracks.

Rodrigo Palacio (Genoa): The wing man offered little as Genoa were held by Parma. Never gave the support his side were looking for when going forward. He should have supported Luca Toni, but his effort was laid bare here.

Sergio Pellissier (Chievo): A below-par show from the striker who usually thrives at the Bentegodi. He was hardly involved in the play. When he did show up he fluffed an easy header from close range.

Diego Milito (Inter): Milito is worryingly in the worst team of the week for the second time in a row. He missed two great chances that even on his worst day he would normally have tucked away. Not good from the hitman who is a shadow of his former self.﻿