Robin Bairner at Celtic Park
After two years looking in at Europe's elite competition, the Scots are well placed to make their return, but it should have been so much more straightforward

The Brendan Rodgers revolution at Celtic seemed set to continue, but old failings nearly came back to haunt the Parkhead club, who allowed Hapoel Be’er Sheva back into a tie they were buried in.

On display on Wednesday was a Celtic of two faces. During the first half was the new, confident Rodgers version. The hosts dominated, passed the ball slickly and looked ebullient in attack. By the break they were 3-0 up and the Green Brigade were chanting: ‘We’re having a party in the Champions League’.

Come the hour mark they were not so cocky, yet the Scottish champions found another gear and are now cruising with a 5-2 advantage. Had Moussa Dembele not flicked home a header from a corner with quarter of an hour to go, the momentum would have been firmly with Hapoel, yet Celtic powered clear with the impressive Scott Brown emphatically finishing late on to surely put the tie to bed.

The Israelis seemed to catch stage fright in an opening period bossed by the Hoops. After only nine minutes Tom Rogic fed off some scraps to fire into an empty net. It was a platform built upon so gloriously by the hosts for another 35 minutes.

In-form striker Leigh Griffiths charged late to the back post to thump a header into the net shortly before the break, and his breathtaking free kick in stoppage time seemed to have sealed the tie. It was a strike befitting of Europe’s greatest competition. It may not be beaten for quality throughout this season’s competition.

But even this rejuvenated version of Celtic has skeletons in its closet. Rodgers fielded only two summer signings, and memories of Maribor and Malmo were all too apparent early in the second period. 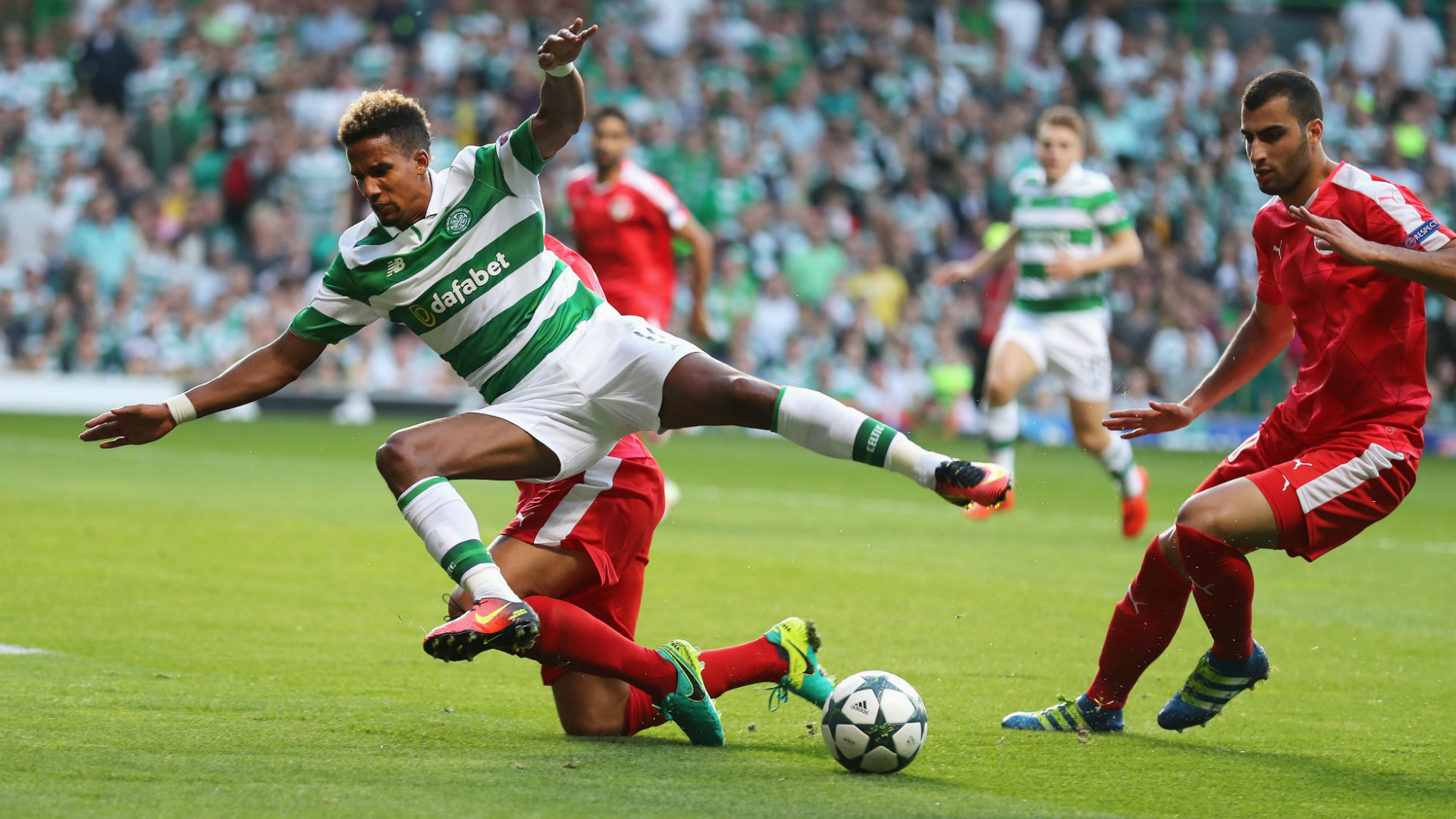 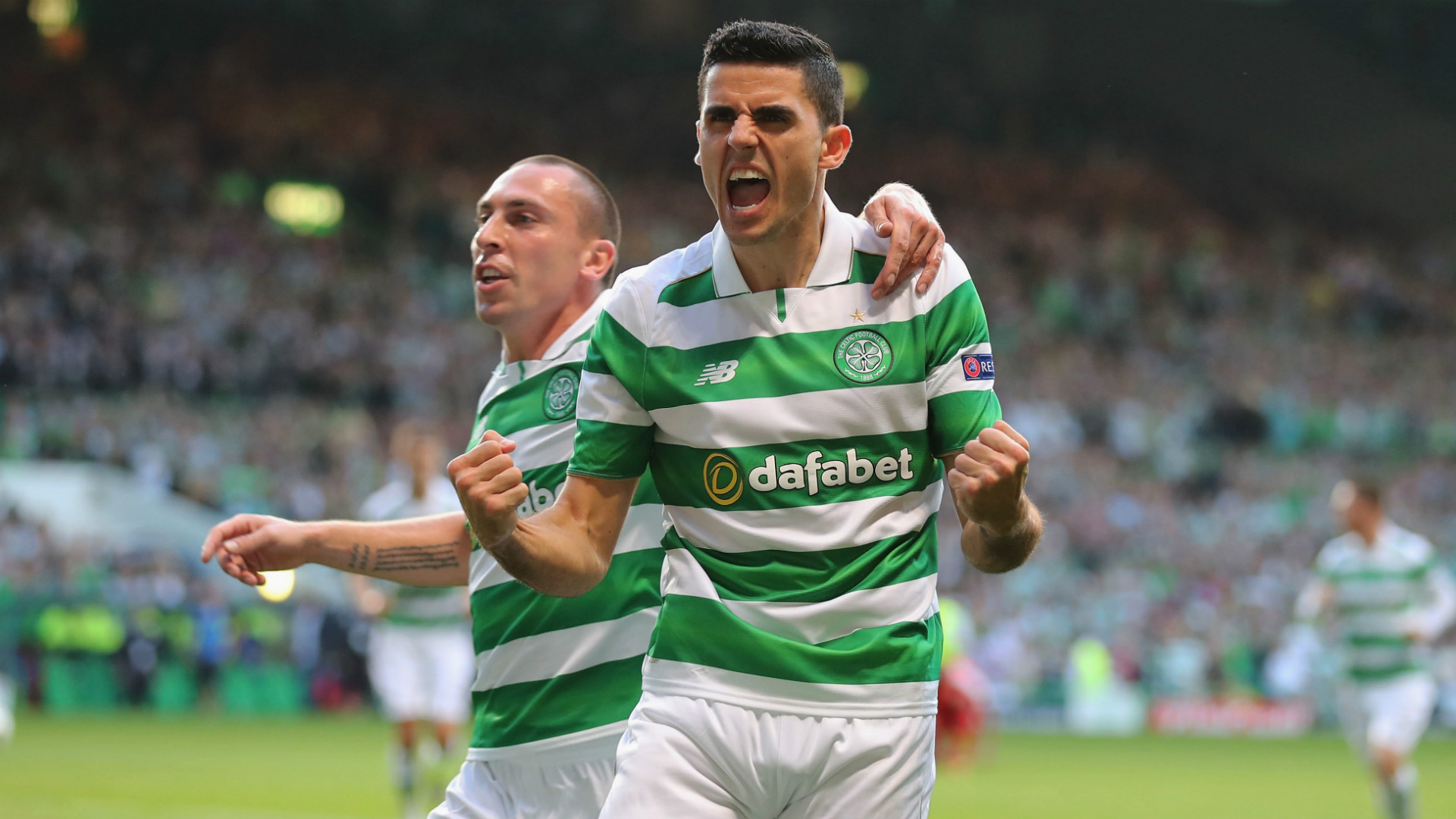 Against the Swedes last season, the Bhoys opened the door to their opponents by conceding cheaply in the latter stages of a first leg they otherwise dominated. As Hapoel clawed their way back into this tie, there were echoes of that fixture, not to mention a sharp reminder of ties against Lincoln Red Imps and Astana, which they struggled through earlier this summer.

The manner in which Lucio Maranhao evaded Eoghan O’Connell in the box was disquieting, yet the fact he was able to beat Craig Gordon was positively alarming and perhaps points to why Rodgers was so pleased with the acquisition of Dorus de Vries late last week. When Maor Melikson finished low from the edge of the box, it constituted more than just a scare.

Dembele’s header has put the Scots back in command and Brown made the second leg the formality it seemed it would be at the break.

These strikes were vital for Celtic to maintain the momentum ahead of next week’s clash.

Hapoel, remember, are undefeated at their Turner Stadium, which they have called home for 11 months now. They have achieved scoreless draws against both Sheriff and Olympiacos, and they would have felt confident after recovering to 3-2 with their hosts rocking.

The Bhoys showed the kind of self-confidence one would expect of a Rodgers side to kick clear again, though. They were a level above their opponents for the most part, and some clinical finishing at vital times ensured that was made evident on the scoreboard.

This is only the first step of the Rodgers rebirth at Celtic Park. There are still shortcomings in this side, most notably defensive, and while the side is on the up, they are not of the calibre that saw the Glasgow club beat Barcelona in 2012.

The Northern Irishman’s pulling power in the transfer market is now set to be texted in the next fortnight as Celtic attempt to build further and make themselves a force once again. The first steps have been taken.