By Peter McVitie
The Manchester City striker was in tears as he limped off in the early stages of Saturday's game, while the Real Madrid man is a doubt after picking up a calf injury against Celta

Manchester City coach Manuel Pellegrini will be devastated to see Sergio Aguero ruled out of his side's crucial Champions League clash with Roma. The attacker, who has scored five goals in as many appearances in the competition - as well as 14 in 15 in the Premier League - was in tears as he limped off during Saturday's 1-0 win over Everton.

The damage to his knee ligament means he will not be available for the meeting in the Italian capital and adds further worry for his boss, who is already without David Silva and Stevan Jovetic and is still stressing over the availability of Vincent Kompany for Wednesday's game.

While Roma have no new injury worries above the long-term absence of Leandro Castan and that of Federico Balzaretti, as well as the doubt over Vasilis Torosidis, the absence of such players will complicate matters for coach Rudi Garcia.

CSKA need a victory over Bayern Munich and for City to avoid a defeat in order to progress to the second round and the Russian side have no fresh worries other than the doubt surrounding Rasmus Elm, while Bayern, guaranteed to finish first, are without Claudio Pizarro, Philipp Lahm, David Alaba, Holger Badstuber, Pepe Reina, Javi Martinez, Thiago Alcantara and Tom Starke. 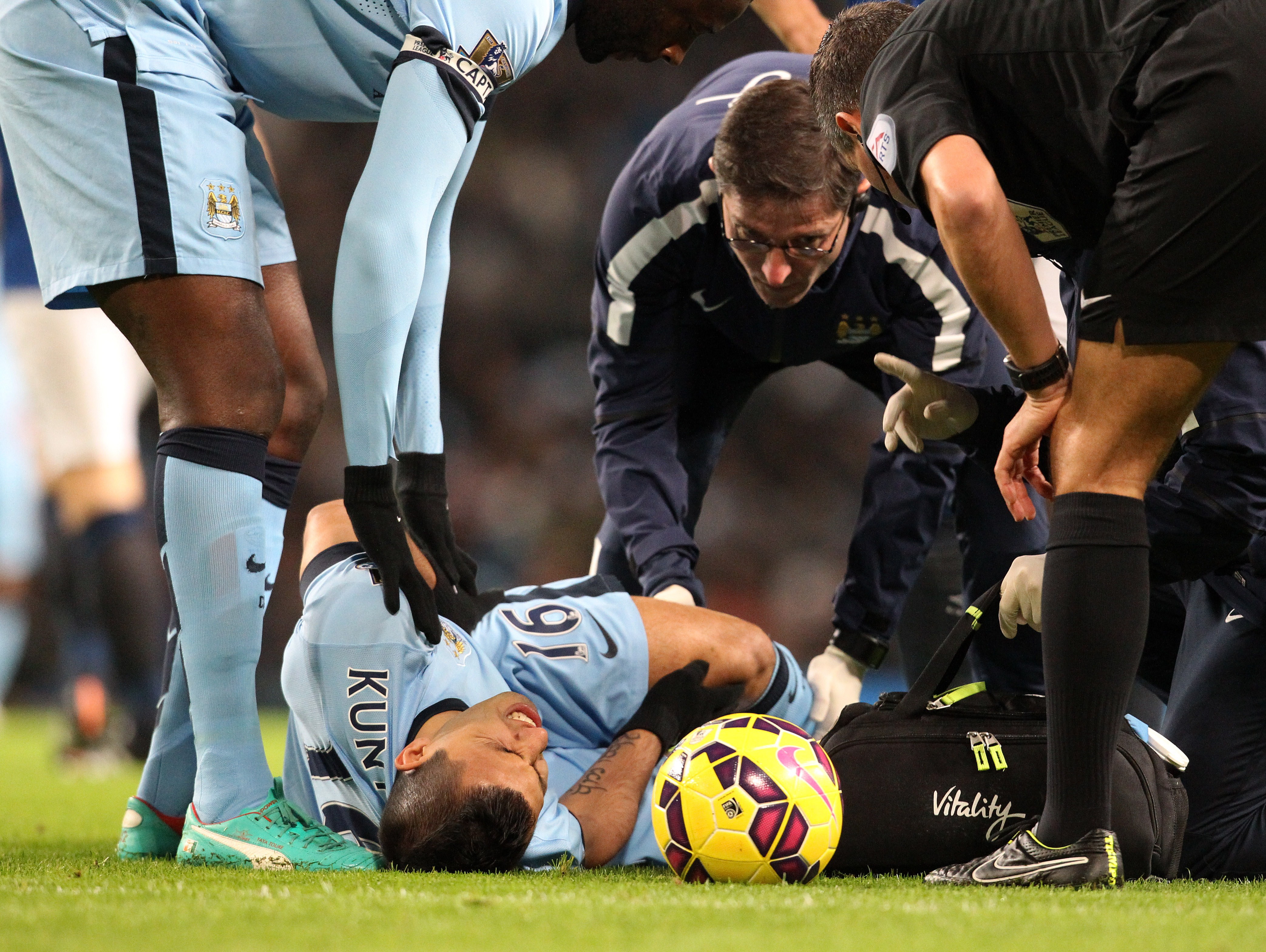 In Group A, Atletico Madrid will clinch top spot as long as they avoid a defeat of two or more goals to Juventus and the Spanish champions will be confident of doing so, with their only absence being in the form of Miranda. Juventus, on the other hand, are missing Kwadwo Asamoah, Andrea Barzagli, Martin Caceres and Simone Pepe.

A defeat for the Serie A champions and a win for Olympiakos will see the Greek side progress and the latter have to make do without Jimmy Durmaz, while there remains a doubt over Kostas Giannoulis. Their opponents, Malmo, remain unsure about the availability of Johan Hammar.

James Rodriguez is expected to miss Real Madrid's match with Ludogorets on Tuesday after he was withdrawn from his side's 3-0 win over Celta with a calf injury. Though the true extent of the problem is yet to be determined, he is expected to add to the absence of Luka Modric for the midweek tie. Ludogorets, who will finish third in the group if they draw and Liverpool lose, are missing Roman Bezjak.

A draw against Liverpool is enough to see Basel go through but Fabian Schar was taken off in their win over Luzern and could forfeit the match, while there are doubts over Derlis Gonzalez. Ivan Ivanov missed the weekend's clash and will not be fit, while Giovanni Sio remains a concern. Liverpool, though, are still without Daniel Sturridge, Suso and Mario Balotelli for the vital decider.

Elderson Echiejile, Layvin Kurzawa and Geoffrey Kondogbia are missing for Monaco for their meeting with Zenit, whose only doubt is Aleksandr Kerzhakov. Eliseu and Silvio might be relieved to miss Benfica's final clash in a torrid Champions League campaign as they are doomed to fourth, but current leaders Bayer Leverkusen have to look to secure pole position despite the absences of Stefan Reinartz, Kyriakos Papadopoulos and Giulio Donati. 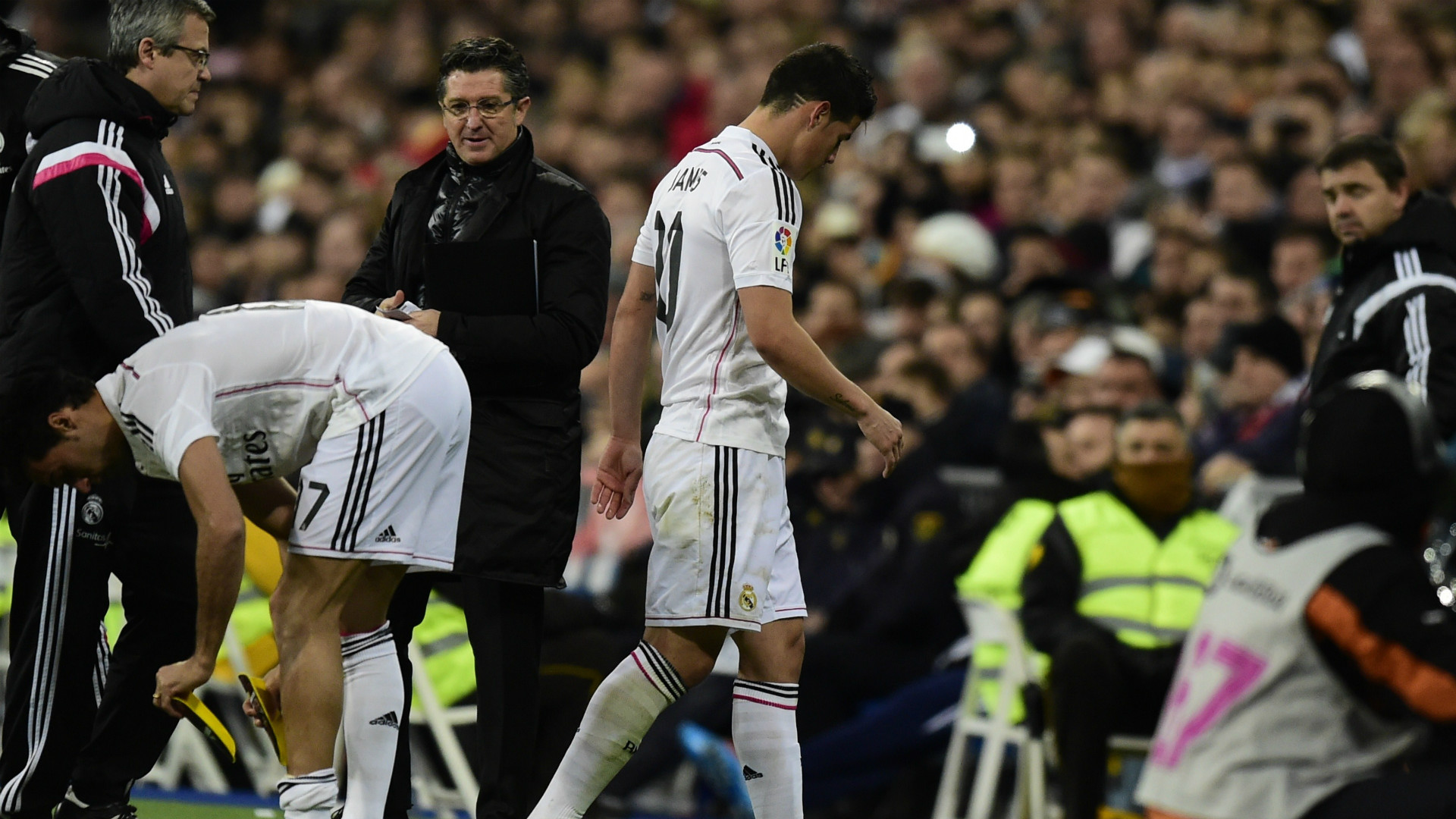 James | The Colombian picked up a calf injury and could miss the meeting with Basel
Mathieu Debuchy, Abou Diaby, David Ospina, Mesut Ozil, Jack Wilshere, Mikel Arteta and Nacho Monreal make up a rather lengthy injury list for Arsenal for their clash in Turkey with Galatasaray. The bottom side are sweating over the availability of Blerim Dzemaili while Aydin Yilmaz is certain to miss the game. Borussia Dortmund are without the services of Sokratis Papastathopoulos, Oliver Kirch, Kuba Blaszczykowski, Ji Dong-won and Marco Reus and face an Anderlecht side who have no new injury concerns other than the long-term absence of Matias Suarez.

Luis Enrique and Laurent Blanc have almost full squads to choose from for their crunch tie to decide who will finish top of Group F. Barcelona are missing Thomas Vermaelen, who is yet to kick a ball for the Catalan side, while Paris Saint-Germain are only without 21-year-old Jean-Christophe Bahebeck.

Ajax are missing long-term absentee Viktor Fischer and left-back Nicolai Boilesen for their third-place decider with APOEL, while Anwar El Ghazi and Niki Zimling, who missed the weekend's thrashing of Willem II, are doubts. APOEL look set to take to the field without Constantinos Charalambidis, Carlao, Tomas De Vincenti and Vasilios Papafotis.

The injury Nani picked up in Sporting's weekend league clash makes him a doubt for their meeting with Chelsea, while Schalke, who face Maribor, are without Julian Draxler, Jefferson Farfan, Joel Matip, Kevin-Prince Boateng, Sead Kolasinac, Leon Goretzka, Chinedu Obasi and Sidney Sam.

Shakhtar Donetsk, who have cemented second place, take on leaders Porto without Serhiy Kryvtsov and Marcio Azevedo and Athletic Bilbao are looking to clinch third place despite missing Guillermo Ferandez, Aritz Aduriz and Andoni Iraola against a BATE side whose only worry is over Egor Filipenko.