By Matt Monaghan
Lillestrom manager makes his former club favourites for tie
Premier League pace and power will blast Manchester United past AC Milan in their heavyweight European clash, according to Henning Berg.

The two clubs meet tonight in Italy for the first leg of the Champions League round of 16 tie. Several of football’s finest players, including Ronaldinho, Wayne Rooney and David Beckham, will take to the pitch to battle for progression to the latter stages of the competition.

Berg, 40, made 81 appearances in three seasons at United and was in the Red Devils side that claimed a 1-1 draw at the San Siro against Inter in 1999.

Now the 100-times capped Norway international is convinced the Mancunians' ‘high tempo’ approach will tip the balance their way.

He said: “This game will be very interesting to see. Italian teams traditionally have greater control, but English clubs are able to play at a higher tempo.

“There are fantastic players in both sides, but United are the favourites. The Italians have got the tactics, but United’s tempo and intensity should be enough to see them through.

“Although United’s power will be important, a lot will still depend on Rio Ferdinand and Edwin van der Sar. United must keep it tight and get the right result to bring back to Old Trafford for the second leg.”

Milan and United have been drawn together four times in the continent’s elite competition, with the Italians coming out on top each time. The last meeting, at the semi-final stage in 2007, saw the Rossoneri claim a convincing 5-3 aggregate victory. 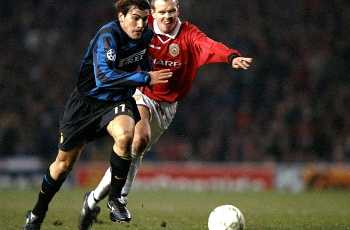 Since the 3-0 defeat at the San Siro which dumped United out of the cup three seasons ago, Sir Alex Ferguson’s charges are undefeated on the road in Europe and have dismantled Inter and Roma.

United shone a year ago against Inter at this evening’s venue and outplayed Jose Mourinho’s side in the 0-0 draw. A similar result tonight against Milan will set the platform for progression to the quarter-final stage.

To stop United’s dream of a third-successive Champions League final appearance, Milan manager Leonardo will rely on Ronaldinho to provide the inspiration.

The Brazilian superstar has enjoyed an upturn in form this season. He currently sits top of the Serie A assists charts and is the leading scorer for the Rossoneri in the league with nine goals.

Although swift to acknowledge ‘Ronnie’s’ quality, Berg was not fully convinced he has the fitness to compete at the highest level any more.

“I don’t know Ronaldinho’s fitness, but we all remember his fantastic performances for Barcelona. I don’t know if it is possible for him to compete at the highest level, with the highest tempo any more though,” the current Lillestrom manager said.

“Can he perform for one game or two? Either way, he will have to do it at a high tempo.”