Climbing Up The Charts

Inter started the 2010-11 campaign on a slow note but have been steadily gathering pace over the past few weeks. At the moment Rafael Benitez’s side are third in Serie A with 14 points from seven matches, just two points behind leaders Lazio.

Last weekend Inter defeated Cagliari 1-0 in Sardinia and in midweek they won in the Champions League, defeating Tottenham Hotspur 4-3 at San Siro to edge closer to progress from the group. However, the Italian and European champions conceded thrice to a side that wouldn’t battle for the Premier League ttle and this should be of some concern to Benitez.

Nevertheless, Inter have a proud home record and have yet to lose in front of their supporters this season in any competition. In the league the Beneamata have conceded just three goals all season and they will be keen to show their defensive prowess on Sunday too.

Sampdoria had started the season on a winning note but had then started to fade. However, the Genoa-based side are looking good again in the league as they defeated Fiorentina 2-1 last weekend.

That win has propelled the Blucerchiati to seventh in the standings on 10 points, just two off a Champions League spot. Samp will now be keen to hold climb further up in the table as in a very competitive Serie A, every point and every match matters.

However, Samp’s Europa League ambitions were dealt a blow on Thursday evening when they were defeated 2-1 by Metalist Kharkiv way from home. It punctured a five-game unbeaten run in all competitions, implying that Domenico Di Carlo’s side will have to build up momentum all over again. 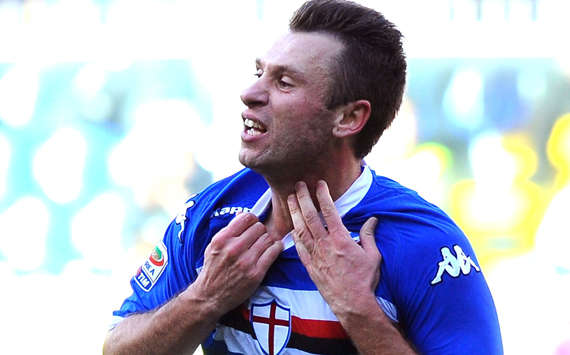 Thiago Motta, Mancini, Milito, Stankovic, Mariga and Suazo are out injured for the Nerazzurri, who are likely to field their much used 4-2-3-1 formation. This time too Eto’o will be the lone striker upfront with Coutinho, Sneijder and Pandev playing behind him.

Semioli is out injured for Sampdoria while Lucchini is suspended. Pazzini and Cassano will be the two strikers.

Goal.com is proud to be a premier partner of Digg.com and as such is pleased to offer exclusive invitations to our users to become a participant in the Alpha launch of the new Digg.com. Click here for your access code for the alpha site - act now as invitations are limited!
Close