By Subhankar Mondal
The Nerazzurri are back to winning ways...
Back Into Form

Reigning Italian and European champions Inter had started the new campaign on a slow note but two successive league wins have propelled Rafael Benitez's side to the second place in Serie A with seven points, behind leaders Cesena only on goal difference.

On Sunday afternoon the Nerazzurri fell behind Palermo in Sicily but striker Samuel Eto'o turned on the style and scored a brace to lead his side to a 2-1 victory. However, things have taken a rather unsavoury turn since then as Diego Milito's agent has claimed that the Argentina international forward does not feel secure under Benitez's stewardship.

"Diego doesn't feel the trust from his new coach," Fernando Hidalgo told Il Corriere dello Sport. "The Portuguese made him feel indispensable. He made him feel secure and he would transmit tranquility. These things don't happen now. In fact he is always under scrutiny. And when it's time for a player to come off it's always Milito."

Nevertheless, Milito does remain an important part of the Inter puzzle and he will start on Wednesday.

Bari finished in a respectable 10th position last season and will attempt to do something similar this time around too. The Galletti have made an impressive start to the Serie A campaign and are currently eighth.

After defeating mighty Juventus 1-0 at home in their opening game of the season, Bari held Napoli 2-2 draw in Naples. However, at the weekend they failed to score against Cagliari at the Stadio San Nicola and were held to a 0-0 draw.

Winning against Inter in Milan will be a tough task for Giampiero Ventura's side but given that they have already won in Turin this season, nothing's impossible for Bari. 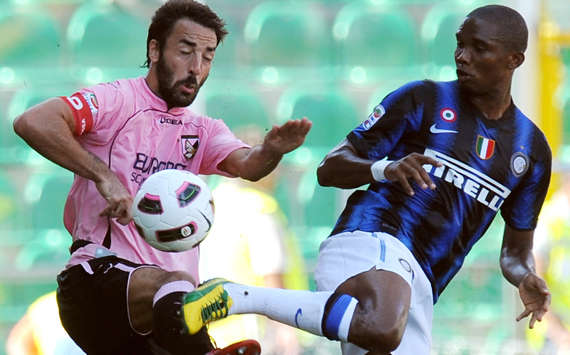 Thiago Motta is still injured for Inter but playmaker Wesley Sneijder is back for the clash against Bari. However, Javier Zanetti has been rested with a chest problem.

Romero, S. Masiello and Gazzi are out injured.


Goal.com is proud to be a premier partner of Digg.com and as such is pleased to offer exclusive invitations to our users to become a participant in the Alpha launch of the new Digg.com. Click here for your access code for the alpha site - act now as invitations are limited!
Close