By Robin Bairner
The 28-year-old's first goal for Pep Guardiola's outfit in European competition took him past the tally of one of the Premier League's brightest stars
Bayern Munich midfielder Arturo Vidal has overtaken Alexis Sanchez to become the most prolific Chilean in the Champions League.

The 28-year-old netted his first European goal for Pep Guardiola’s side after just two minutes of their quarter-final first leg against Benfica, giving the Bundesliga champions the edge ahead of the return match next week.

In total it was his 10th goal in the competition, having previously scored nine times for Juventus – including five alone in the 2013-14 season.

Alexis, meanwhile, has been left in his wake. The 27-year-old scored three times for Barcelona in Europe and has notched seven times for Arsenal, although one of these goals was in the qualification rounds for the Champions League and is therefore not counted. 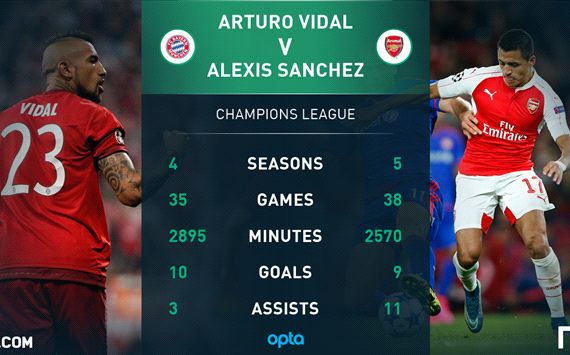