Barcelona are less dependent on Lionel Messi these days. In the past weeks and months, Luis Suarez has taken a lead role for Luis Enrique's side, with the Uruguayan's sublime scoring stats close to the Argentine attacker at his prolific peak - and have kept the club on course for a Liga and Copa double.

When Barca wobbled in April, losing three Primera Division matches on the trot to allow Atletico and Real Madrid back in the title race, Suarez stepped up. The 29-year-old went on to net 14 goals as Barca hit 24 without reply in their final five fixtures to win La Liga. And on Sunday he can fire the Blaugrana to yet another trophy.

This has been a remarkable second season for the former Liverpool forward at Camp Nou. After seeing out his ban for biting Italy's Giorgio Chiellini at the World Cup, the South American struck 25 goals in 43 appearances in an excellent debut campaign which improved when he was utilised in the centre of the attack and Messi moved back out to the right.

"I never imagined playing in this position because Leo was playing as the 'nine' and I thought, 'where are they going to play me?'" Suarez admitted this week. 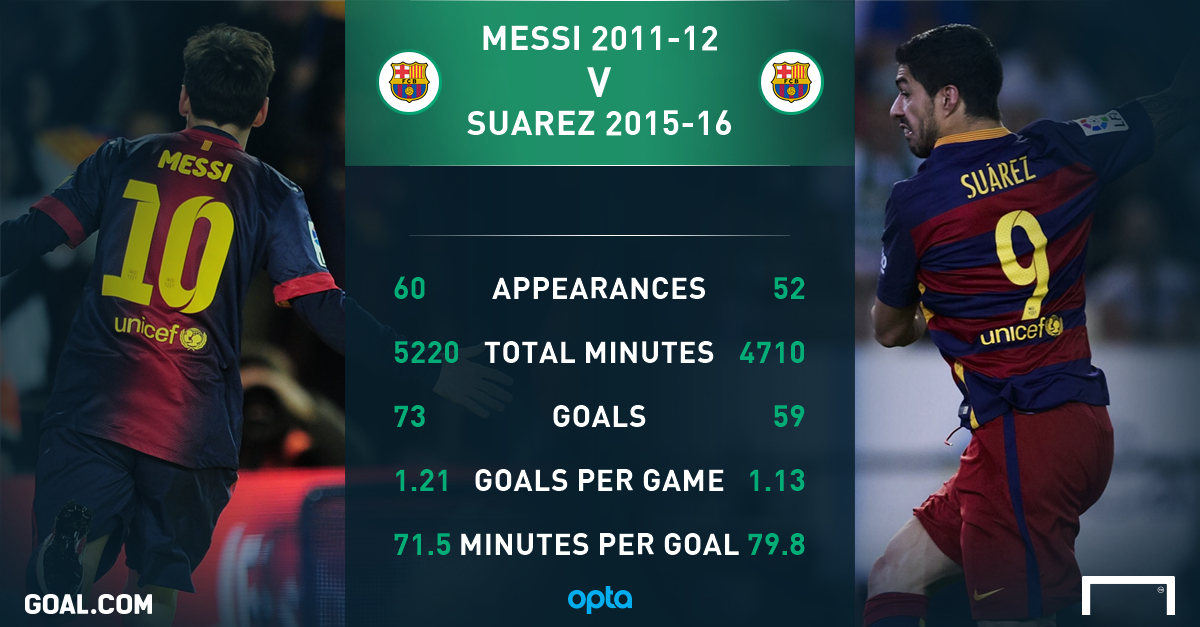 Indeed, the decision was a surprise but one the players later revealed they had come to themselves as they built a healthy understanding on and off the pitch.

And having featured from the outset in the current campaign, Suarez's stats are astonishing: 52 goals in 59 games at a rate of one every 79.8 minutes. That return may not be quite up there with Messi's goalscoring peak in 2011-12 when the five-time Ballon d'Or winner netted 73 times in 60 appearances - but it isn't too far away either.

Messi was the main man then and he is now, which makes his team-mate's numbers all the more impressive. Previous strikers like David Villa and Zlatan Ibrahimovic could not compete with the Argentine's ratio in front of goal and were warned not to try. But in comes Suarez to outscore the Argentine.

"We get along very well, both on and off the park. Sometimes it is hard to understand, because a striker is always angry when they’re not the main star, but here it does not happen like that," he said this week. 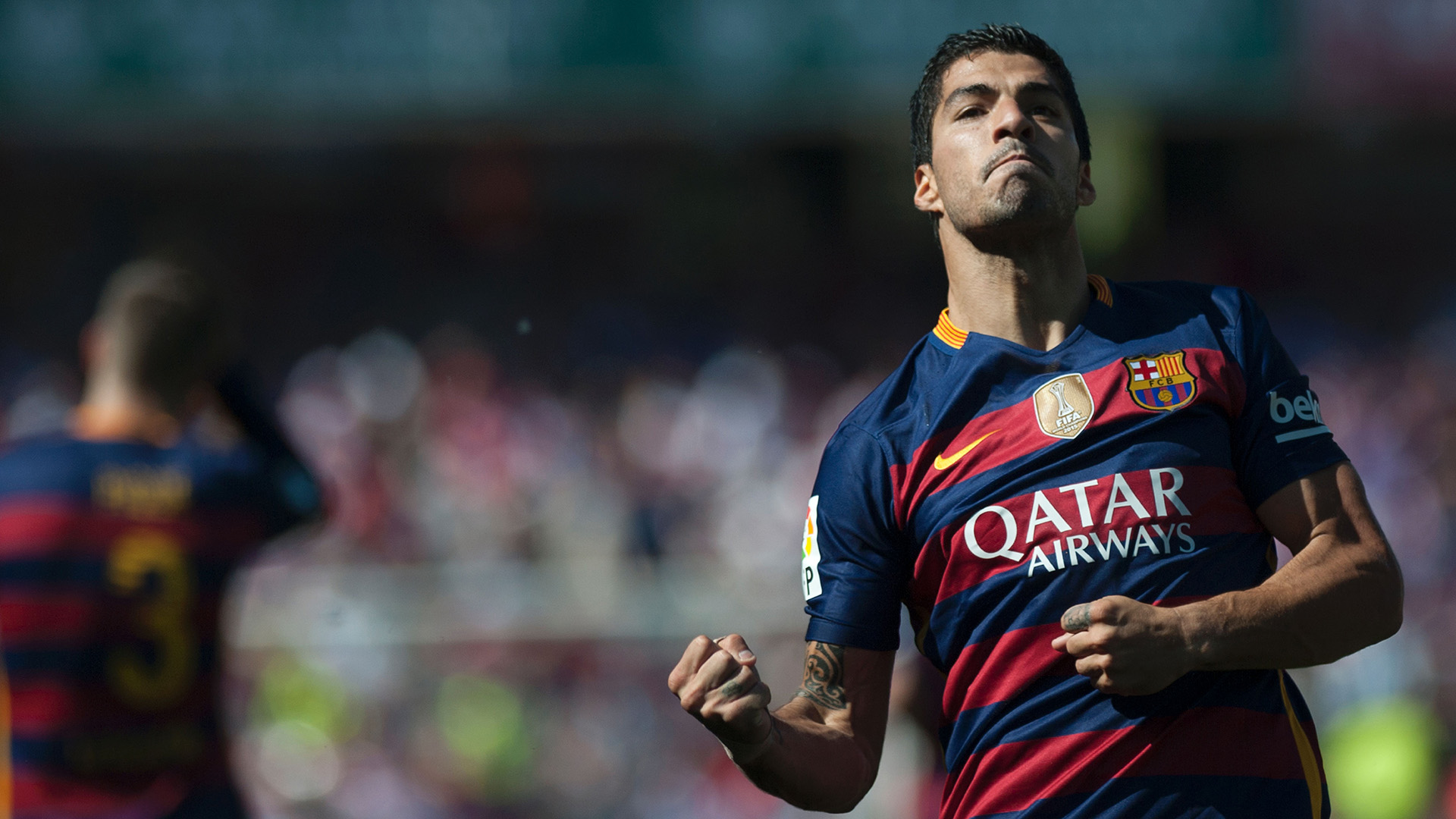 "There is nothing false or acted. It is a true friendship, where there is zero jealousy and where we get along well. We advise each other and we are glad when things go well for each other. For me, I tell my children I played with the best player in history and that is a privilege."

But in 2015-16, Suarez has 59 goals, Messi 41 and Neymar 30. Having finished way behind his two team-mates in the scoring charts last season, he will eclipse both in terms of goals this term and one more against Sevilla on Sunday in the final of the Copa del Rey will mean he has twice as many as the Brazilian.

Already the only player other than Messi to hit 50 in a single season for Barca, Suarez can hit 60 by scoring at the Vicente Calderon and he could even supersede the best-ever mark of Real Madrid's Cristiano Ronaldo (61 goals in 2014-15), having already beaten the Portuguese to the Pichichi prize and the Golden Shoe this season. 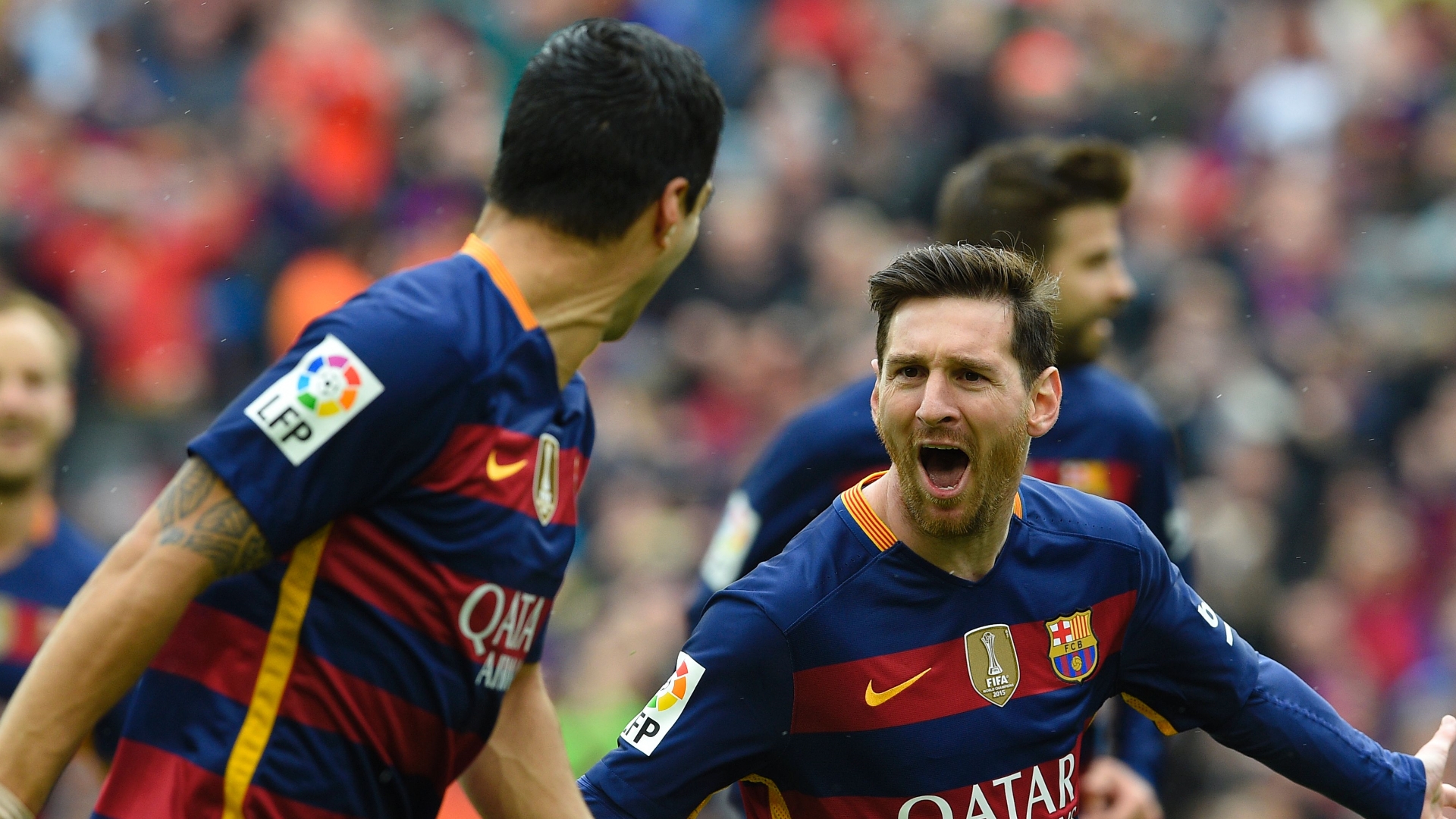 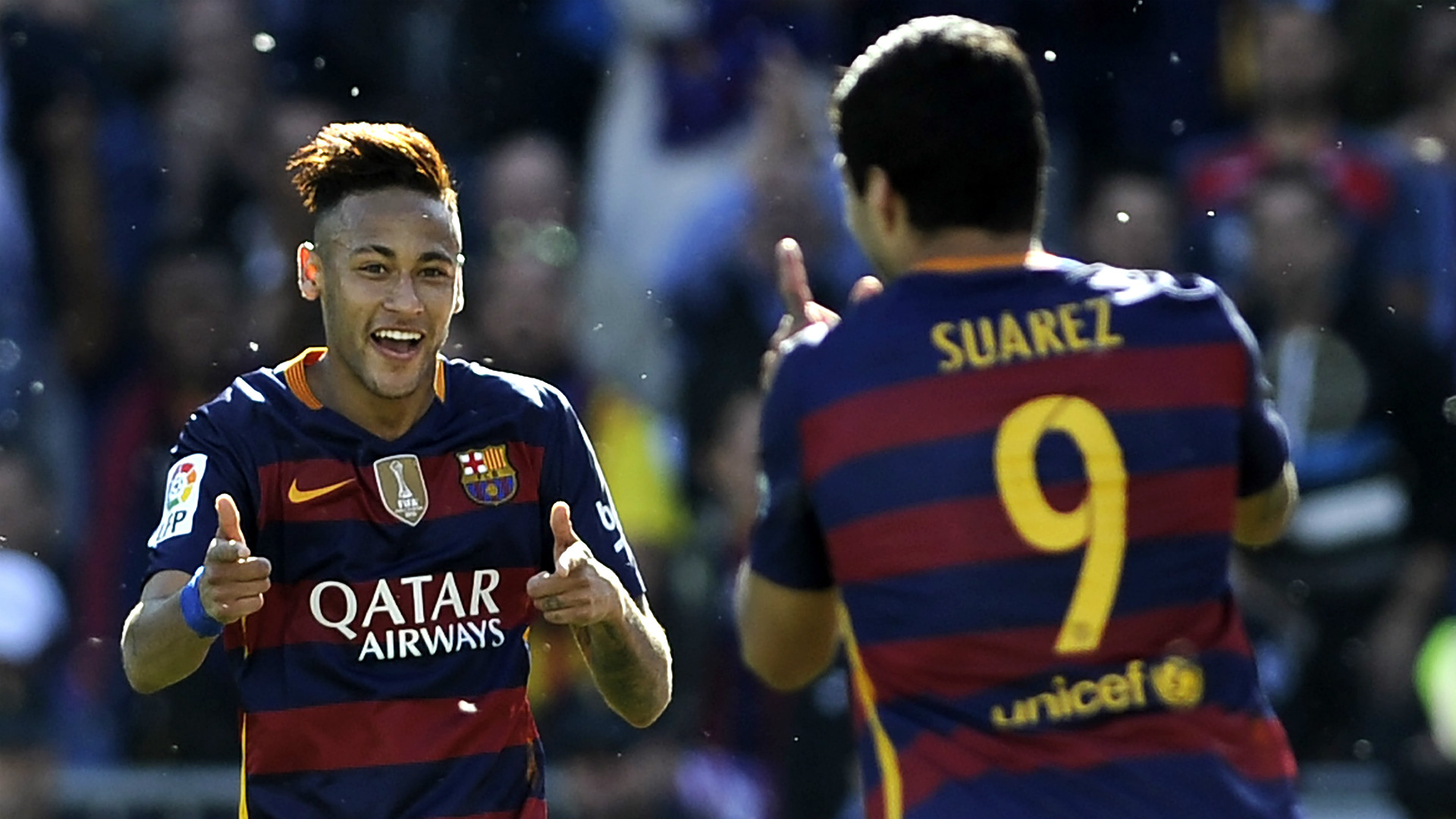 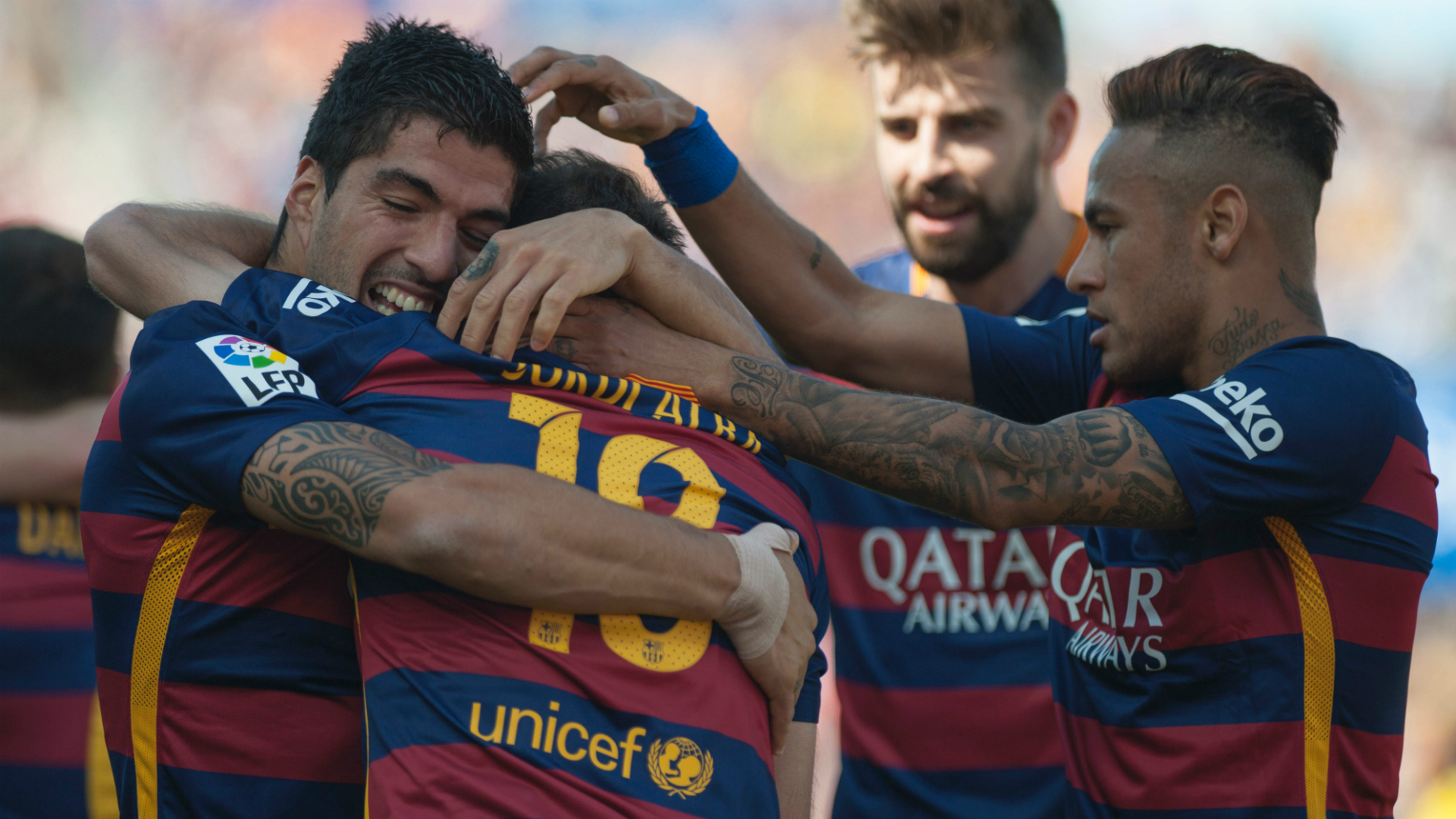 The 29-year-old's 40 Liga strikes were key to retaining the Primera Division for Barca, while his five goals in the Club World Cup saw him finish as top scorer in that competiiton and his two against Atletico in the Champions League quarter-final first leg looked at the time like firing the Catalans to the last four.

He could hardly have done more. And in the Copa del Rey, Suarez struck four times against Valencia earlier this season in a spectacular 7-0 win on home soil, while he also netted the passed penalty planned with Messi in La Liga at home to Celta Vigo. There have been so many memorable moments.

And he has not finished yet. Having kept Barca in the race for La Liga with vital goals in the last five games, Suarez now turns his attentions to the Copa and Sevilla - fresh from beating Liverpool to win the Europa League on Wednesday night - on Sunday.

It seems certain to end with more goals for Suarez and probably another trophy too, which would represent a fitting finale to a stunning season for him. And with the forward in such formidable form, the only negative note is that the campaign has to end so soon.