By Miles Chambers
Three of the Blaugrana's social media profiles were infiltrated by what appeared to be an organisation known as the Syrian Electronic Army criticising the club's links with Qatar
Barcelona's official Twitter accounts were hacked on Tuesday following their 2-0 win over Manchester City in the Champions League.

All of the posts contained a link to the profile of the 'Syrian Electronic Army', suggesting the group wanted to take responsibility for breaking into the Spanish, Catalonian and English handles.

Three identical posts were left which criticised the Blaugrana's ties with Qatar - a nation in the same Arabic region as the civil war-torn Syria - with Qatar Airways the current sponsor of the club's shirts. 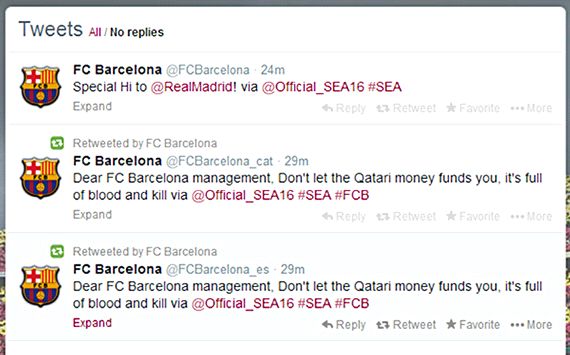 Hack & Dash | Barca's accounts were sneaked into and posted on without their knowledge
The messages took over 10 minutes for the Spanish and Catalonian profiles to delete, and even longer for the English language outlet, but not before the hacker gave Clasico rivals Real Madrid a heads up.

"Special hi to Real Madrid," the short tweet read on Barca's English edition after the initial protest message against Qatar.

The three official Twitter profiles of La Liga's leaders - who put one foot in the quarter-finals of the Champions League with a 2-0 away victory at Man City on Tuesday - have a combined following of just over 21.3 million people.
Close