By KS Leong
The Galacticos failed to end the campaign with a win, but the result had little bearing in the title fight...
Malaga 1-1 Real Madrid - Lineup/Stats
La Liga Fixtures, Results & Standings

Malaga will be playing in La Liga again next season after a 1-1 draw with Real Madrid on the final day of the season confirmed their top flight status. While the result meant little to the Merengues in the final analysis, the solitary point was enough for Los Boquerones, who went ahead through Duda before Rafael van der Vaart restored parity.

Madrid went into the game at La Rosaleda looking for a win and for Barcelona to slip up against Real Valladolid to claim the Primera Division title, but Malaga also needed three points to avoid relegation.

It was Los Blancos who sent out the first warning after just 90 seconds when Marcelo expertly controlled a 50-yard cross-field pass from Xabi Alonso before pulling it back to the middle for Cristiano Ronaldo, who fired well wide after being harried by a swarm of defenders.

Malaga responded instantaneously when Duda shimmied into the box between two defenders and fired in a snap-shot which Iker Casillas spilled, but Felipe Caicedo could only hammer the follow-up into the side netting.

But the hosts would not waste their next chance as Duda fired his side ahead after nine minutes. The Portuguese exchanged passes with Caicedo to split the Madrid defence apart before picking up the return backheel pass and finished with a low shot into Casillas’ right corner.

Los Blancos’ best chance to draw level came in the 25th minute when Ronaldo thumped a blistering header towards the top corner but Gustavo Munua made an acrobatic dive to tip it over the bar. Five minutes later, Rafa van der Vaart almost scored from a spectacular bicycle kick but his effort just flashed wide. As the Merengues started to slowly assert their control on the game, news stated to filter into La Rosaleda that Barcelona had taken a two-goal lead against Valladolid at the Camp Nou.

The Andalucians almost punished Madrid’s sudden lack of concentration when Duda charged down the left flank and squared the ball to the centre for Caicedo, who stabbed his shot just wide from five yards out. Higuain then earned a freekick for Los Blancos when he weaved past four players towards the box before being clipped by Apono. Van der Vaart sent the ensuing freekick piercing through the wall but Munua pulled off a brilliant one-handed block at full stretch. 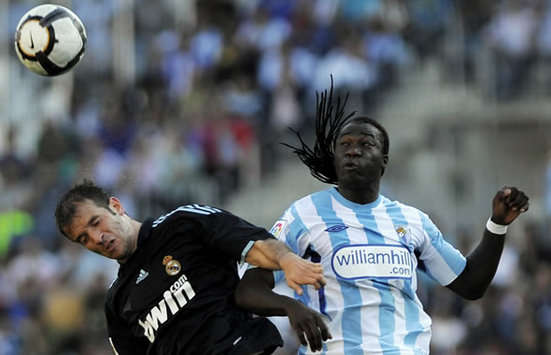 Despite learning of Barca’s two-goal lead against Valladolid at half-time, Madrid did not let their spirits wane in the second half as they kicked off the restart with real purpose. And it quickly paid dividends. First, Marcelo threatened when he ghosted in behind the Malaga defence and rattled in a stinging volley from Sergio Ramos’ deep cross but again, Munua made an excellent save to deny the visitors.

But on 48 minutes, the capital giants levelled proceedings. Van der Vaart collected Marcelo’s pass and was immediately surrounded by three defenders infront of goal, but the Dutchman did superbly to shield the ball before firing in a low shot on the turn right into the bottom corner.

Sergio Ramos came close to handing Los Blancos the lead on the hour mark but his header flew marginally over the bar. Minutes later, Esteban Granero should have scored with a sharp volley from 12 yards out which looked destined for the bottom corner, but the ball took a deflection off van der Vaart and it was directed safely to Munua instead.

As the clock ticked down, the urgency from both sides began to diminish and clear-cut chances started to dry up. Karim Benzema did test Munua on two occasions in the final 15 minutes, but the Uruguayan shot-stopper was equal to the task.

Tensions started to boil over at the end when Duda was red carded for an off the ball incident with Xabi Alonso. But it mattered little to the home fans as they began celebrating after learning of results from the other games.

With Tenerife losing at Valencia, the draw was sufficient for Malaga to survive the plunge, but it would be an academic outcome for Madrid in the title race following Barca’s impressive win at Valladolid.