By Ewan Roberts
The north Londoners have an option to match any offer for the Real Madrid star, according to leaked documents, and even banned him from talking negatively about Daniel Levy
Leaked documents have revealed that Tottenham have the right to match any bid for Gareth Bale as a result of a clause included in the deal that took him to Real Madrid.

The documents - released by Football Leaks, who have recently published the transfer paperwork associated with Anthony Martial's move to Manchester United and Eliaquim Mangala's switch to Manchester City - state that Madrid must notify Spurs should another Premier League club make an offer for Bale they intend to accept.

Tottenham would then be allowed to match the offer during a 72-hour window, with their bid taking precedence over any others even if the original bidder returned with a higher offer. 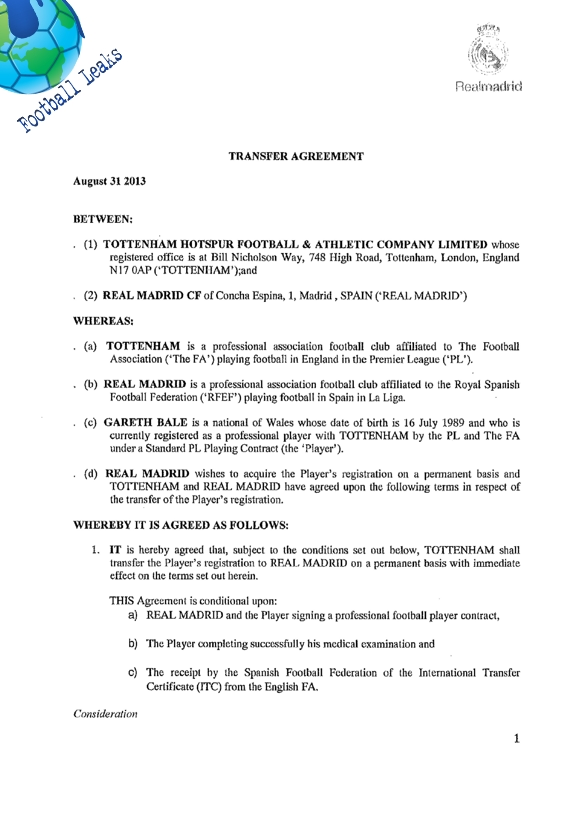 The alleged transfer contract reads: “In the event that TOTTENHAM does match the Third Party Offer, Real Madrid shall be required to accept TOTTENHAM'S offer in preference to any other offers received (including any higher offers received following Real Madrid's receipt of the Third Party Offer) and transfer the Player as soon as possible in the first available FA Registration Period to TOTTENHAM.”

The option to re-sign Bale, who has repeatedly been linked with Manchester United, only lasts until June 30, 2019 and the clause does not come into effect should a non-Premier League club make an offer. It is also highly improbable that Spurs would be able to match the kind of offer needed for Madrid to consider selling the Welshman.

Nevertheless, the revelation that Spurs have the option to bring Bale back to White Hart Lane is one of many interesting details in the document, which also claims Madrid actually paid €9.75 million more than the fee reported at the time.

Los Blancos had just 15 days to pay €91m but instead opted to send the money in four instalments which totalled €100.75 million – and even included a clause that prevented Tottenham from revealing the true fee.

It has regularly been reported that Cristiano Ronaldo was unhappy that Madrid had paid more for Bale than they did to sign him from Manchester United, which was a world-record deal at the time.

“The Parties acknowledge that Real Madrid shall issue a press release in which the only economic details given will be that the Price of the operation is the amount of 78,171,930-Pounds Sterling,” the contract continues.

“TOTTENHAM agrees that it shall not issue any press release in which it refers to the economic aspects of this Agreement.” 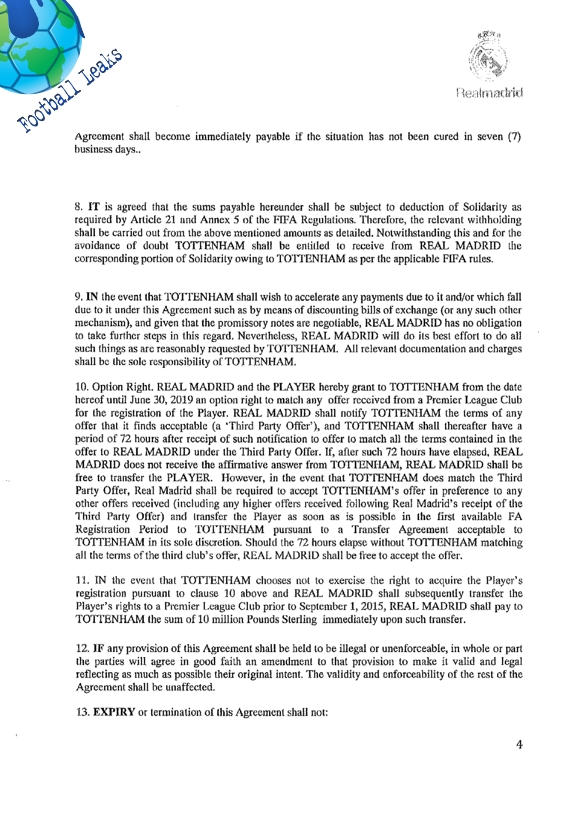 The contract also reveals that Spurs had yet to finish paying for Rafael van der Vaart, who joined the club some three years earlier from Madrid, with the Spaniards agreeing to waive any due payments as part of the deal to sign Bale.

The world-record move featured something of a stand-off between Bale and Tottenham chairman Daniel Levy, with the contract also preventing the player and his new club from saying anything negative about Levy or Spurs.

“Real Madrid undertakes to procure that the Player shall not, either directly or indirectly, in public of through the media, make any negative or derogatory comments regarding TOTTENHAM, it’s Chairman, its Board and/or any of its employees,” the clause reads.