Liverpool and Tottenham are ready to test Swansea City's resolve to keep Wilfried Bony by bidding for the striker in the January transfer window.

Bony only signed a new four-year contract with Swansea last month but that will not stop the Ivorian attracting attention in the New Year as Liverpool and Spurs try to boost their chances of qualifying for next season's Champions League.

Both clubs made approaches to Swansea for Bony over the summer but pulled out of deals after turning up their noses at the €25 million asking price.

Swansea manager Garry Monk has warned it would take an "astronomical" fee for the club to sell their star striker in January, when Bony will leave to play for Cote d'Ivoire in the Africa Cup of Nations.

Arsenal and Manchester City have also been linked with the Bony, but Liverpool and Tottenham would both be able to offer the 26-year-old a regular starting spot as they look to bolster their attacking options.

Bony is a proven goalscorer having netted 33 times since signing for Swansea in a €15m deal from Vitesse in July 2013, while he is the leading scorer in the Premier League in 2014 with 19 goals this calendar year. 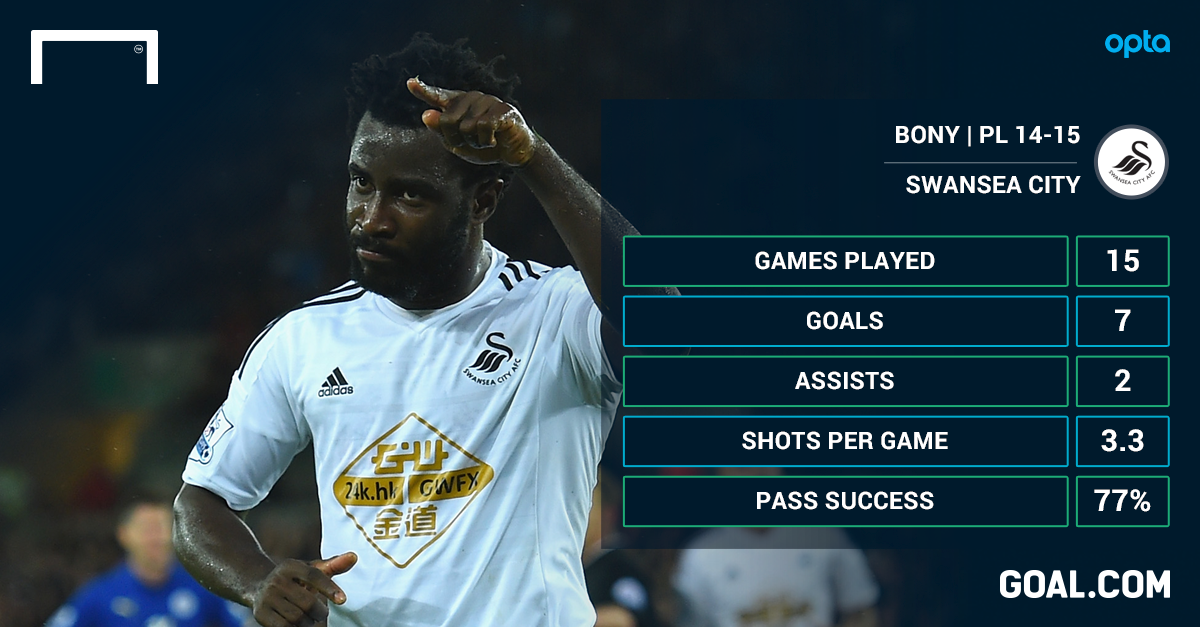 Liverpool have struggled badly in attack following the summer departure of Luis Suarez to Barcelona and without main striker Daniel Sturridge, who has been injured for most of campaign.

Mario Balotelli arrived for €20m from AC Milan but is yet to score in nine Premier League appearances, with the Reds scoring just 19 goals in 15 league matches this term.

Brendan Rodgers is a long-term admirer of Bony and again bemoaned the lack of goals in his side after Liverpool's Champions League exit against Basel on Tuesday.

The Reds spent around €150m on new players over the summer and it is unclear whether owners Fenway Sports Group would sign off another big-money signing, especially with Belgian forward Divock Origi joining the club from Lille when his loan spell expires at the end of the season.

Tottenham have also struggled in front of goal. They are the second-lowest scorers in the top 10 of the Premier League, with strikers Emmanuel Adebayor and Roberto Soldado finding the net just three times between them this season.

Manager Mauricio Pochettino is desperate for a quality striker to lead the line and Bony would fit the bill and, crucially, is proven in England. Several of Tottenham's signings from the last two summer transfer windows have arrived from foreign clubs and failed to settle at White Hart Lane.

But there will be a premium on Bony to prize him away from Swansea in January, with Monk confident last week that the Welsh club would keep their star man.

"It would take an astronomical fee for him [Bony] to go anywhere," Monk said.

"We are not a selling club, we don't need to sell. We are very much committed with our players and they are committed to us and that's how we move on."
Close