The Colombia international was one of the stars of the World Cup and is attracting interest from La Liga, while Manchester United could also join the race to sign him
By Duncan Castles

Monaco have told Real Madrid they will need to pay €90 million [£70m] if they are to sign Colombia's World Cup sensation James Rodriguez, Goal understands.

The Ligue 1 club do not want to sell the leading scorer of Brazil 2014 although they have taken heed of James's desire to join Madrid, with the 23-year-old recently stating that he would go to the Spanish capital with his eyes closed.

As such Monaco have floated a price of €90m to the Champions League winners, a sum that would place the Colombia international just behind prospective team-mates Gareth Bale and Cristiano Ronaldo in the list of world-record transfer fees.

Goal understands that Manchester United could compete with the big-spending Liga club for James's signature and, while Madrid president Florentino Perez will attempt to negotiate the price down, the numbers are considered viable for a Galactico signing within the Santiago Bernabeu. 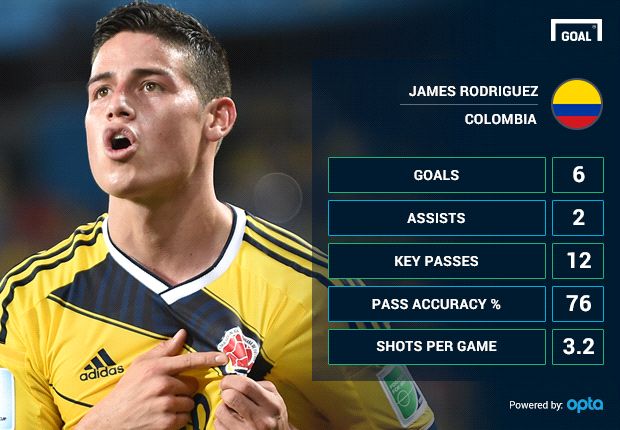 WORLD BEATER | James's Brazil 2014 stats make for impressive reading
And Monaco, who could also see star striker Radamel Falcao move to Madrid, are in a strong position to demand a large profit for James, who only joined the club from Porto last summer and signed a five-year contract.

Toni Kroos, meanwhile, is also on the verge of signing for Madrid and confirmed on Wednesday that he is closing in on a switch to Carlo Ancelotti's side.

As a result, Sami Khedira and Angel Di Maria have both been placed on the market regardless of the quality of their contributions to Madrid's Champions League triumph, with Arsenal and United both monitoring their situations.

But it is James who could be Madrid's major Galactico signing of the summer, with Madrid president Florentino Perez buoyed by the success of last summer's record acquisition of Bale.

The former Porto star scored 10 times in 38 appearances for Monaco last season as he helped the club qualify for the Champions League and lit up the World Cup with his performances for Colombia, who were eventually knocked out by Brazil at the quarter-final stage.
Close