Barcelona have officially announced the signing of Alexis Sanchez from Udinese in a deal worth a total of €37.5 million.

MORE
The attacker had been given permission to leave the Chilean national squad's preparation for the Copa America in anticipation of the transfer being finalised late last month, but the two sides were unable to reach an agreement and the move was therefore put on hold until the Andean side had concluded their campaign in the continental competition.

The Catalan club had hoped to negotiate a player plus cash deal for Sanchez, but both Bojan Krkic and Jeffren Suarez rejected moves to the Serie A side.

Weeks of wrangling followed, but the deal was finally reported as completed on Wednesday afternoon, with the official announcement arriving on Thursday, after Chile had been surprisingly knocked out of the Copa America by Venezuela in the quarter-finals earlier on in the week.

Barcelona will pay €26m up front with an additional €11.5m in variables and the player will undergo a medical and sign his new deal on Monday.

Barcelona coach, Pep Guardiola, said of Sanchez in a press conference in Barcelona on Tuesday: "He is very young, he can play in three different attacking positions, he has a lot of defensive intensity, he can unlock a match and, from what I have been told, he is a very good boy."

The Chilean winger/second striker will become a part of the most feared forward line in the game, joining David Villa and Pedro as options for a starting place alongside Lionel Messi in Pep Guardiola's first team.

Sanchez became a target for the Catalans during the 2010-11 season when his explosive performances helped lead Udinese to fourth place in Serie A, which earned them a place in next season's Champions League. 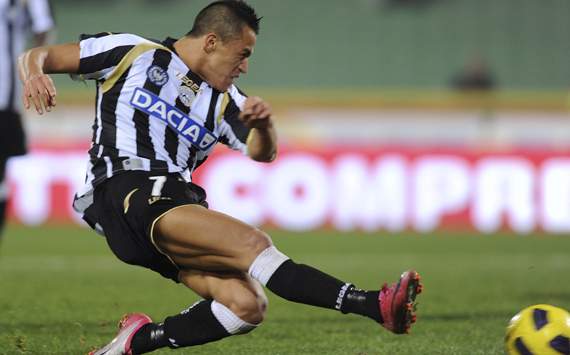 He had shown signs of his promise in the previous season with his club side as he became a regular starter for the first time, and went on to earn global prominence as one of the stars of Chile's swashbuckling run to the last 16 at the 2010 World Cup in South Africa, where they were eventually beaten by Brazil.

Sanchez leaves Udinese after five years with the club, during which time he spent seasons on loan with Colo Colo and River Plate. He made 111 appearances for the Friuli outfit, scoring 21 goals.

Barcelona fans will be hoping his lightning pace can help to freshen up their attack in the face of extra demands ahead of them in 2011-12, with the Club World Cup and European Super Cup added to their calendar following their Champions League triumph over Manchester United in May.