Liverpool and Tottenham are set to battle for Atletico Madrid star Diego Forlan in January after the striker revealed he would be interested in moving to either club.

Goal.com UK has learned that the Uruguayan striker is targeting a move to England after setting his heart on a return to the Premier League when the transfer window re-opens.

It is understood Atletico are reluctant to sell the former Manchester United flop but both Liverpool and Spurs have been made aware of the €17 million-rated striker's availability.

New England Sports Ventures, the new owners of Liverpool, will back manager Roy Hodgson in January with funds to strengthen the squad and the former Fulham boss has made signing a striker to partner Fernando Torres his priority.

Tottenham are also in the market for a top class striker as their four frontmen – Jermain Defoe, Peter Crouch, Roman Pavlyuchenko and Robbie Keane – have scored just two Premier League goals between them this season.

Goal.com UK understands Spurs made a summer enquiry for Forlan but were put off by the €27m asking price. 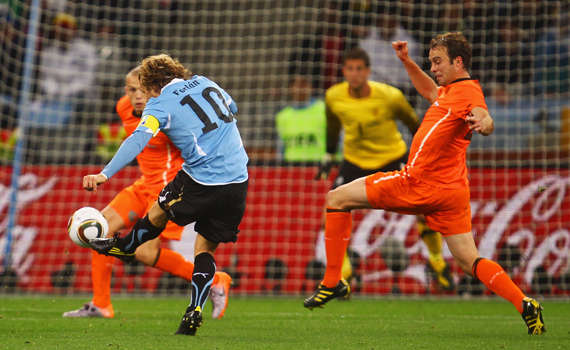 Chairman Daniel Levy felt the price tag offered no value for a 31-year-old but he could be €11.5m cheaper in January after privately indicating he wants to leave the Spanish capital.

While Spurs are determined to make a marquee signing in January, NESV are believed to be hesitant about splashing large sums on older players and want to focus on bringing young talent to Anfield.

Both clubs could struggle to meet Forlan’s wage demands of around €115,000-a-week but will be heartened that one of the world’s most lethal strikers has publicly flirted with a return to England.

"Everybody says things, that maybe you don't want to go back," said Forlan earlier this month. "The time I had in England was great and I enjoyed it and if I had the chance to go back I would be really happy."

Forlan’s stock has never been higher after he starred at the World Cup in South Africa, scoring five goals and being awarded the Golden Ball for the best player in the tournament. This week he was named on the 23-man shortlist for the Ballon d'Or.

His performances attracted interested from clubs across Europe including Manchester City and Inter.

Hodgson has suffered at the hands of Forlan’s eye for goal as he struck twice in Atletico’s 2-1 win over Fulham in the Europa League final last season.

Forlan has twice won the Pichichi Trophy for being the top scorer in the Primera Division and would take the pressure off Torres, who has felt the strain since coming in for criticism in South Africa.

The striker wants to prove himself in England following a nightmare two-year spell in Manchester after his £6.9m transfer from Argentine side Independiente in January 2002.

He scored just 10 goals in 63 league appearances for Sir Alex Ferguson’s side before signing for Villarreal in August 2004.