By Jonathan Mitchell
Last year's winners will meet Palermo in the 2011 final after eliminating Roma 2-1 on aggregate in Wednesday's second-leg where Eto'o and Borriello were on target
Coppa Italia holders Inter will defend their title against Palermo in this season’s final after a 1-1 draw in the semi-final second-leg against Roma on Wednesday night.

A solitary Dejan Stankovic strike in last month’s first-leg was enough to give Leonardo’s side a one-goal cushion going into this evening’s clash, in which a Samuel Eto'o goal proved enough to finish the job and ensure Inter would progress despite a nervy ending after Marco Borriello netted a late header.

Roma started the match brightly as they looked for an early away goal to level the aggregate score.

In the 10th minute Borriello pounced on a Maicon slip on the edge of the box but rifled over the crossbar. Roma captain Daniele De Rossi appeared particularly eager to address the deficit and twice went close shortly after Borriello’s miss.

A neat exchange around the edge of the box between David Pizarro and Jeremy Menez ended with De Rossi whipping a curling snapshot inches wide of Julio Cesar’s left-hand post.

De Rossi then expertly dropped a shoulder to work the ball past Houssine Kharja before sending a shot arrowing back across his body towards the top corner. Julio Cesar and the Giuseppe Meazza crowd breathed a sigh of relief as it fizzed past the upright.

Although Inter eventually found their feet and had a sustained spell of dominance between the 25th minute and half-time, they too failed to truly test the opposition goalkeeper.

Doni watched as Eto’o dragged a low shot past the post and easily caught a weak Kharja drive which lacked direction.

Inter continued to see more of the ball following those missed opportunities but failed to penetrate the Roma backline as the first 45 petered towards a tame conclusion. 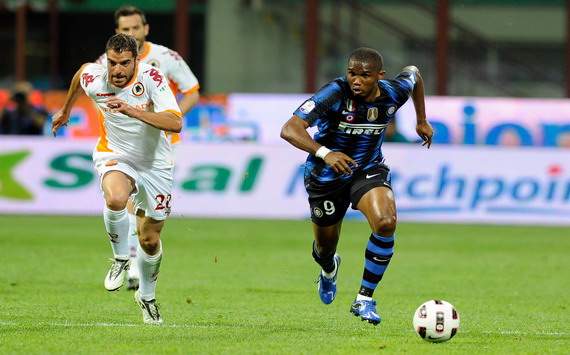 If anything, the beginning of the second half was less of a spectacle as both sides committed foul after foul as the play continuously stopped and started.

However, the goal that the game, although certainly not those of a Roma persuasion, craved arrived in the 58th minute.

A Kharja cross appeared to flick off Simone Perrotta’s outstretched hand, drawing huge appeals from the Inter players except one notable exception in the shape of Eto’o, whose only thought was to latch on to the loose ball and stroke a cool side-footed effort beyond the motionless Doni to open the scoring.

Giampaolo Pazzini came close to making it two when he bundled his way into the box and fired off a powerful angled drive, but Doni sprung to his left to thwart him with an excellent save.

Roma also had their goalkeeper to thank when he produced another fine stop to deny Inter sub Diego Milito in the 72nd minute, when the Argentine striker fastened on to compatriot Javier Zanetti’s sumptuous slide-rule pass.

However, it was the visitors who finished the game with a flurry. Borriello was incredibly unlucky not to reduce the deficit in the 76th minute when he latched onto Mirko Vucinic’s visionary pass and smashed a shot beyond Julio Cesar but watched in agony as the ball hit both posts and rebounded to safety.

Borriello would not be denied, however, and rose above Lucio to head a Perrotta cross into the net to spark a frantic end to the match.

In the end, the Romans could not find the goal they needed to snatch the win as Inter celebrated captain Javier Zanetti's 1000th career appearance with a trip to the final against Palermo on May 29.