By Vasil Kotsev
The striker was in deadly form once again...
Inter are through to the next round of Coppa Italia after they beat Genoa 3-2 at the Giuseppe Meazza. Samuel Eto'o recorded a first-half brace to give the Nerazzurri a two goal cushion at half-time.

Houssine Kharja pulled one from the spot after the break and MacDonald Mariga restored Inter's two-goal lead shortly after. Substitute Houssine Kharja netter a header just before injury time, but it was too little, too late as the Grifoni crashed out of Coppa Italia.

Neither team dominated the game in the early minutes of this clash as clear-cut chances were few and far between. Genoa were trying to pressure Inter in their own half, but with mixed result as the Nerazzurri looked very good in possession.

The first goal of the game came from the first real chance of the encounter as Eto'o netted in the 15th minute to open his account in the Coppa Italia. The striker superbly controlled a Sulley Muntari cross, fooled Emiliano Moretti and Domenico Criscito with a neat flick, and finished calmly past Alessio Scarpi.

The goal had a positive effect on Inter's play as Leonardo's men began to tighten the grip in search of a second strike. Eto'o went close with a great shot in the 18th minute, but Scarpi managed to pull off a good save to deny the striker.

Genoa were struggling to create chances in the following minutes with only Miguel Veloso having a crack at goal near the half-hour mark. Inter were pretty much in control and were soon to convert their domination into goals. Muntari had a powerful shot miss narrowly in the 42nd minute, and in the following attack Eto'o completed his brace with another wonderful goal.

The strike came from another mistake by the left side of Genoa's defence where Moretti and Criscito were having a horrible night. Eto'o was picked out by Maicon in the box, neutralised the ex-Valencia defender with a impeccable first touch and slotted home superbly. 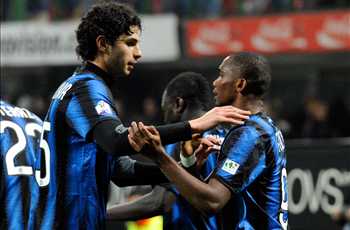 Genoa raised their game after the break and managed to claw one back in the 53rd minute through a penalty by Kharja. Inter newboy Andrea Ranocchia was the culprit as he clipped Gergely Rudolf in a seemingly harmless situation.

Inter's response, however, was quick as Mariga struck with a thunderous header in the top left corner six minutes later, following a corner on the right by Maicon. Genoa woke up after that strike and tried to mount a comeback in the remaining minutes.

Luca Castellazzi was called into action on several occasions to deny Criscito and substitute Rodrigo Palacio and Giandomenico Mesto. A goal finally came just before injury time when Sculli was left with a simple header, following an inch-perfect delivery from Veloso. However, it was too little, too late for Genoa and the game finished 3-2 and Inter went through to the next round.