By Daniel Quinton-Navarro
Dramatic finish to the Coppa Italia final as Palermo attempt a momentary comeback before being reduced to ten men, but Eto'o and Milito secured the trophy for Leonardo

Inter retained the Coppa Italia after a 3-1 victory over luckless Palermo, crowning Leonardo's men cup champions for the seventh time.

Inter took the lead midway through the first half thanks to Samuel Eto’o precise finish with Fabrizio Miccoli and Abel Hernandez both coming close for Palermo before half-time.

Wesley Sneijder and Eto’o combined ruthlessly in the second half to dampen Palermo’s hope before a late Ezequiel Munoz header ensured it would be a dramatic conclusion.

However, the Argentine went from hero to villain within seconds as he was given his marching orders before Diego Milito scored in the dying embers of the game as Inter secured silverware for the sixth consecutive season.

Palermo’s Hernandez came close in the opening minute after Lucio failed to clear the ball but the striker could only put his shot into the side netting.

The three-time finalists continued their positive start after a smart exchange on the edge of the Inter area giving Javier Pastore a chance to slide the ball beyond Julio Cesar but a poor first touch gifted the ball to the onrushing Brazilian.

Inter took the lead against the run of play in breathtaking fashion after Wesley Sneijder sliced the Palermo defence open with a pass into the path of Samuel Eto’o, who provided the clinical finish.

Inter were forced to scramble inside their area as Palermo saw three strikes at goal blocked before Julio Cesar was made to make a world-class reactionary save to prevent the Rosanero from levelling.

With half-time beckoning Ilicic thought he had been felled in the area after contact with Andrea Ranocchia, but it was deemed minimal as the referee motioned play-on. 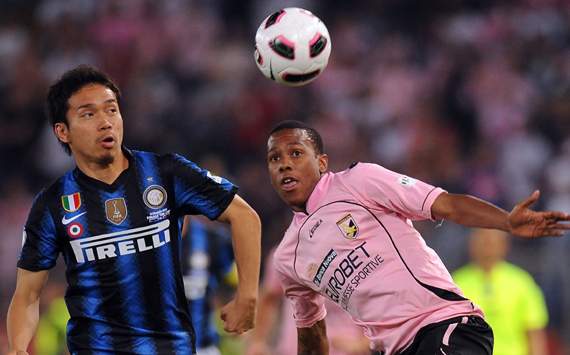 Palermo began the second half encouragingly as Balzaretti stung the palms of Julio Cesar, signalling their intent in pursuit of the much needed goal.

Delio Rossi brought on Fabrizio Miccoli, playing in his last game for the club, as Palermo continued to push for the equalising goal.

And it nearly came after Pastore’s perfectly weighted cross was powered toward goal by the substitute, only for Julio Cesar to fling himself low to his right and turn the ball around the post.

Inter’s goal was continuously threatened as Palermo pressurised the Nerazzurri defence, but Leonardo's men stood firm with Christian Chivu making an exemplary tackle with Hernandez bearing down on goal.

The defending cup champions finally got their buffer when Samuel Eto’o provided the telling touch after Sneijder had sent the striker clear as Palermo desperately went in pursuit of an equaliser in the 10 minutes remaining.

Late drama ensued as Palermo halved the deficit through Munoz with a well directed header from a debatable corner as the Rosanero attempted to claw their way into match.

With Inter reeling, they launched a counter-attack which was halted by Munoz, who was sent off in ludicrous circumstances after winning the ball cleanly. Eto’o, however, could only hammer the resulting free-kick into the upright.

But it didn't matter as Diego Milito managed to provide the killer strike as he restored Inter’s two-goal advantage in injury time to help his side retain the Coppa Italia.

For Palermo, despite the cup defeat, they will still earn a place in next season's Europa League third qualifying round by virtue of finishing runners-up to an Inter side who will take part in the Champions League.

: page; be part of the best football fan community in the world!
Close