By Subhankar Mondal
Leonardo should be confident of a comfortable Inter victory in Bari tonight...
Doom And Gloom

Bari are virtually guaranteed of relegation from Serie A. With just 14 points from 22 matches, the Galletti are firmly stationed at the foot of the table in Serie A and have the worst scoring record in the division. Giampiero Ventura's side have lost their last five competitive matches and are on a free-fall to the bottom of the pit.

Last weekend Bari crashed to a 2-1 defeat to Cagliari in Sardinia in what was their fourth league loss in a row and 14th overall. The Biancorossi are in a wretched run of results and winning against Inter tonight isn't really looking a very promising prospect.

Coach Ventura knows that his team's future in the Itaian top flight isn't very rosy but remaining optimistic enthuses, "I think the team is improving even though results are not going our way.

"We are in a difficult position but if we were to win two games in a row, things would change.''

Some would suggest that Inter coach Leonardo has been 'found out'. The Italian and European champions may have recovered from their defeat to Udinese with back-to-back wins against Napoli and Palermo in the Coppa Italia and Serie A respectively, but they haven't looked at all comfortable or convincing in their victories.

At the weekend the Nerazzurri went 2-0 behind Palermo at San Siro and had winter signing Giampaolo Pazzini to thank for the eventual 3-2 comeback win. With Milan failing to defeat Lazio on Tuesday, Inter are now 10 points behind the leaders with 38 points from 21 matches; a win tonight at Serie A's basement-dwellers Bari and a victory in their game in hand will place them just four points off the pace.

Leonardo, though, is keeping his wings under check and believes that Bari will not be easy pushovers. He told the press on Wednesday, "Bari are a team in construction and they have changed plenty compared to last year.

"This game will be motivating for them, but we cannot think our of league position or theirs. We have to be careful.

"They have two or three players who can give them that push, and so we have to play it right." 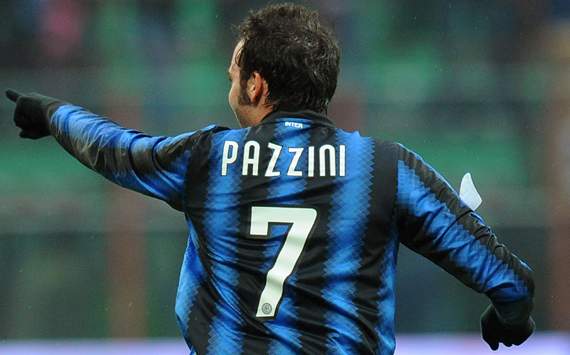 Salvatore Masiello, Belmonte and Barreto are out injured. Bari will line up in a 4-3-1-2 formation that will have Okaka and Rudolf as the two strikers and Bentivoglio deployed just behind them.

Stankovic, Cordoba, Mariga, Lucio, Castellazzi and Samuel are injured and will miss the trip to Bari.

Sneijder is back in the squad but he is unlikely to start. Pazzini and Eto'o will start in attack as the two strikers with Pandev deployed just behind them.