By David Schiavone
The Partenopei dominated the latter stages of the game but failed to find the net despite creating numerous chances...
Ezequiel Lavezzi errant spot kick meant Inter triumphed 5-4 on penalties against Napoli in the quarter-finals of the Coppa Italia after an enthralling 0-0 stalemate the Stadio San Paolo.

In an extremely open match both sides had early chances and it was the hosts who had the ball in the back of the net after 12 minutes but Edinson Cavani's tap-in was ruled out due to an offside decision.

The Napoli front three of Lavezzi, Cavani and Marek Hamsik caused the Inter backline a number of problems as they pressed extremely high up the park.

After struggling early on, Maicon eventually became Inter's main threat as he galloped down the right flank and this transformation helped to created the best chance for Leonardo's team.

As his perfect cross into the box found an unmarked Esteban Cambiasso who from ten yards out, could only force a great reaction save from Morgan De Sanctis, as the goalkeeper tipped the ball onto the bar.

Both sides pressed as the half came to an end but neither was able to find the back of the net. 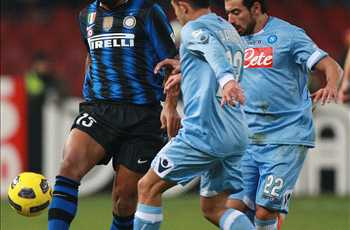 Coming out for the second half with a lot more impetus, Inter forced themselves onto the Partenopei, but thanks to some wayward shooting from Samuel Eto'o, De Sanctis was never put under too much pressure.

But as the half wore on Napoli looked far more dangerous especially on the counter attack. On 76 minutes, Paolo Cannavaro had a glorious chance to put the home side ahead, when he latched onto a Walter Gargano free kick but he chested the ball straight into the hands of Luca Castellazzi from four yards out.

More opportunities came the way of the Partenopei with Hamsik squandering a tremendous chance, hitting Castellazzi with one shot before forcing a goal-line headed clearance with another as the game moved into extra time.

Camped out in the Nerazzurri's half, Napoli picked up where they left off and laid siege to the Inter goal in the first period of extra time, forcing Lucio into a couple of desperate clearances, while Lavezzi forced Castellazzi into a terrific reaction save on the 100th minute when he should have burst the net.

The away team did have some attacking moments with Goran Pandev and Andrea Ranocchia putting chances wide, but Juan Camilo Zuniga had a chance right at the death, but Inter were able to repel everything Napoli could throw at them and thus the game went to a penalty shootout.

Cavani and Eto'o both tucked the opening spot kicks away with ease, Lavezzi put his penalty over the bar and with everyone else scoring, Inter go through to face the winner of Thursday evening's match between Juventus and Roma in the semi-finals.