By Subhankar Mondal
The Brazilian playmaker ended the 2009-2010 campaign on a high….
Milan 3-0 Juventus Lineup/Stats
Serie A Fixtures/Results

Milan defeated Juventus 3-0 at the San Siro in their final Serie A game of the season to bid a winning farewell to coach Leonardo. Luca Antonini gave the Rossoneri an early lead, Ronaldinho doubled his side’s advantage a minute before the half hour mark and scored his second midway through the second half.

This was Leonardo’s last game as Milan coach as it was earlier revealed that the club and he have decided to part company at the end of the campaign. It was also Alberto Zaccheroni’s last game as coach of Juventus, who finish the season in seventh place.

Leonardo started in the usual 4-3-3 formation with Alexandre Pato, Marco Borriello and Ronaldinho as the front three while Zaccheroni played Vincenzo Iaquinta and Alessandro Del Piero as the front two with Antonio Candreva and Claudio Marchisio supporting them from the midfield.

The game started on an attacking mode with both sides throwing caution to the wind. The Rossoneri crafted the first chance of the evening as early as the second minute when Ronaldinho put in an inviting ball into the penalty box for Pato, but Giorgio Chiellini smothered the Brazilian striker’s shot.

A couple of minutes later Iaquinta was sent through on goal as the Italian international hitman found himself one-on-one with Milan custodian Dida. But the former Udinese striker couldn’t keep his shot on target. In the sixth minute Candreva found himself at the end of a lovely through ball from the midfield but the Juventus midfielder couldn’t keep his cool and fired his shot well above the Milan goal.

The home side then got onto the act as Ronaldinho raced down the left flank and carved out a lovely cross for an unmarked Pato at the far-post but the young striker’s header was weak and Juve custodian Gianluigi Buffon dealt with it with ease.

The end-to-end action continued as Marchisio fired at the Milan goal from distance with venom but it was somehow kept out by Dida. The ball was spilled by the Brazilian goalkeeper but thankfully for the home side Iaquinta hesitated to go for the rebound.

The deadlock was eventually broken on 14 minutes when Luca Antonini struck for the hosts. Clarence Seedorf sent a wonderful chip for the Milan fullback, who made no mistake from a one-on-one situation with Buffon.

The match lost its momentum after that and became slightly scrappy. However, in the 26th minute Juve could have equalised when Hasan Salihamidzic found himself completely unmarked inside the Milan penalty area but couldn’t take a proper shot on goal.

Three minutes later Milan made the Bosnian and his side regret that missed chance as Ronaldinho scored. Pato and he combined perfectly and the former Barcelona playmaker made no mistake in slotting the ball past Buffon from a close range.

At the moment it appeared to be all over for the Bianconeri, but Zaccheroni’s side had two quick chances. First in the 39th minute Juve legend Alessandro Del Piero released a ferocious strike from the edge of the Milan penalty area that Dida could parry only for a corner. Seconds later a ball was whipped in from the right that Juve defender Fabio Cannavaro fiercely headed towards the Milan goal but couldn’t keep it on target.

Both sides maintained the flow of the match with Iaquinta and Pato going close for Juve and Milan respectively in the remaining minutes of the first half, but it finished 2-0 to Milan at the break. 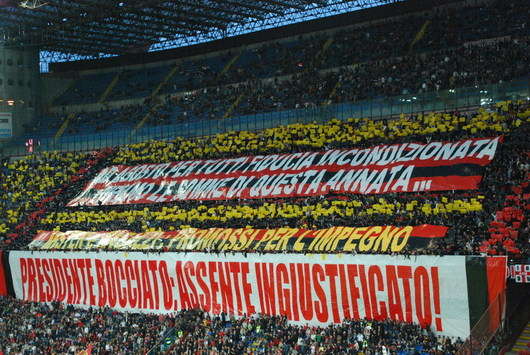 Zaccheroni decided to replace goalkeeper Buffon with Alex Manninger while Mauro Camoranese came in place of Salihamidzic at the start of the second half.

Two minutes into the second session, Milan midfielder Seedorf made a howler when he lost the ball on the edge of his own penalty box, but once again Iaquinta hesitated a bit too long and the danger was eventually cleared.

The game became lively but neither side could really threaten the other, resulting in more half-chances than in proper opportunities.

Three minutes after the hour mark, the hosts had a good chance to make it 3-0 when they were awarded a freekick on the edge of the Juventus penalty area. Andrea Pirlo swung the ball in but it hit the wall, allowing Del Piero to launch a quick but vain counterattack.

However, Milan did eventually score their third goal of the evening and again it was Ronaldinho who found the target for the Rossoneri. The Brazilian playmaker collected the ball at the back post and strolled the ball into Manninger’s net without facing any resistance.

That third Milan goal killed Juve’s motivation and from that moment it was all one-way traffic. The home side could have nailed another nail in Juve’s coffin in the 77th minute when Pato galloped forward beating several challenges, but the Brazilian couldn’t eventually tee up his fellow strikers Filippe Inzaghi and Borriello.

A couple of minutes later Martin Caceres and Marchisio tried to make things happen for Juve down the right flank but the latter’s final ball fell on to the path of a Milan player.

The final minutes were played out without any fury as it ended 3-0 to Milan.


Become a fan of Goal.com UK's Facebook fan page for all the latest news and insight into everything related to the beautiful game!
Close