Mark Doyle
The Argentine has his critics but he proved both his heart and quality when his team needed him most, racking up a goal and an assist in a win that eases the pressure on Frank d...

“The performance against Hapoel Beer-Sheva looked like a training session and on the international stage you cannot get away with that,” former Inter president Massimo Moratti stated ahead of Sunday’s Derby d’Italia against Juventus.

“This team showed no enthusiasm and no emotional connection. We want to see players upset when they lose the ball and happy to have won it back.

“I don’t want to teach anyone their business, but putting a bit of heart into it would be a step forward.”

Inter didn’t just show plenty of heart against the reigning Serie A champions, they showed a pleasing amount of quality. Mauro Icardi led by example in both regards.

Nerazzurri coach Frank de Boer had gone into the game having to deal with widespread speculation that he would be sacked if his side suffered a heavy defeat at home to their great rivals, who had arrived at the Giuseppe Meazza having won their opening three league fixtures. There was even talk that the club had already been in touch with former Roma coach Rudi Garcia about replacing a man who had only been given the job a month before.

Inter sporting director Piero Ausilio dismissed the claim as “nonsense” but there was no denying that De Boer was under intense pressure – or, as Moratti put it, “in a pot of boiling water”.

A 2-1 win over the winners of the past five Scudetti has turned the heat off and if the result was surprising, the performance was even more so. Inter fully deserved all three points. They were the better side.

Where Inter were tenacious, Juventus were tentative – just as they had been in the first half of their scoreless draw with Sevilla in midweek.

The Nerazzurri took the game to their visitors whenever possible, pressing them high up the pitch, and were unlucky not to take the lead just over 10 minutes before the break when Icardi – epitomising his team’s spirited approach – stripped Giorgio Chiellini of possession before striking the far post with a sublime curling effort that had Gianluigi Buffon beaten. 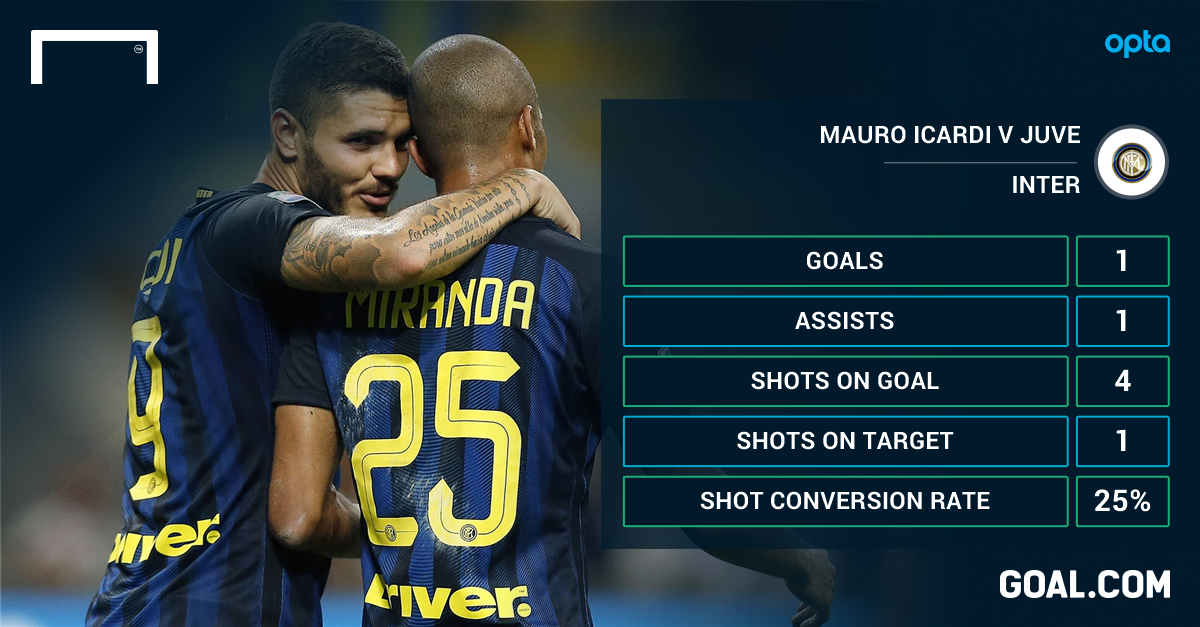 Of course, Juve had their own chances during the first half, most notably when Sami Khedira was left completely unmarked in the area only to head Alex Sandro’s inviting cross right into the arms of a disbelieving Samir Handanovic.

Stephan Lichtsteiner showed no such generosity when presented with a tap-in by the Brazilian wing-back midway through the second half to give the Bianconeri the lead – but it was a lead they scarcely deserved for a stuttering, disjointed display that betrayed a worrying amount of defensive instability.

Even the most hardcore Juve fan could have little complaint when Inter equalised just two minutes later. The source of the goal was utterly unsurprising, for a variety of reasons.

Firstly, Icardi has a nice habit of scoring goals against Juve (he now has seven in eight games against the Old Lady, for Inter and former club Sampdoria). Secondly, he was the only player to have scored for Inter in their four previous outings this term. Thirdly, he looked fired up from the very first minute of the game.

Indeed, it was no surprise to see him lose Leonardo Bonucci in the area and then outjump Mario Mandzukic and sending a downward header past Buffon and into the back of the net.

The Argentine then turned provider nine minutes later. After Candreva had pounced on a desperately loose pass from Alex Sandro, Icardi was put in on goal. Buffon forced the Inter skipper wide but he did not panic – not in the slightest. He simply took his time before sending the a delicious outside-of-the-right foot cross in the direction of the onrushing Ivan Perisic, who powered home what proved the winning goal - even in spite of the late dismissal of Ever Banega.

There was jubilation in the stands at the full-time whistle and, unsurprisingly, on the Inter bench, where De Boer let a huge roar of joy – and perhaps relief.

The former Ajax man will be the first to admit that this is just three points. But this wasn’t just the small step forward that Moratti was looking for, it was a big one.