Achim Feifel, the sporting director of Bayer Leverkusen’s women’s team, is thinking back to when he first started to work Lisanne Grawe, the club’s talented teenage midfielder. As he does so, he laughs.

Two years of playing in the second division with two-time European champions Wolfsburg's reserves hadn't satisfied the youngster, and so she made the move west, to join a team that could give her the minutes her development needed.

Feifel, head coach at the time, was excited about the signing. He knew all about Grawe, having first seen her in an Under-16s tournament when she was playing for her regional team. However, when he finally got to work with her last summer, he would still be taken aback.

“I think she’s very cool under pressure,” he tells GOAL with a little chuckle, asked if anything surprised him about Grawe. “At this age, not many players have this calmness and this is what I could see in the first training sessions. I was surprised.”

Despite having only ever played once in the Frauen-Bundesliga during her time with Wolfsburg, it’s a trait that would allow Grawe - who ranked fifth in the 2022 NXGN list of the world's best teenage footballers - to quickly become a key piece of Leverkusen’s line up last year.

It is also one of many reasons why she is one of the most promising young talents in Germany, in Europe and beyond – a reputation she will no doubt back up at this summer’s U20 Women’s World Cup in Costa Rica. 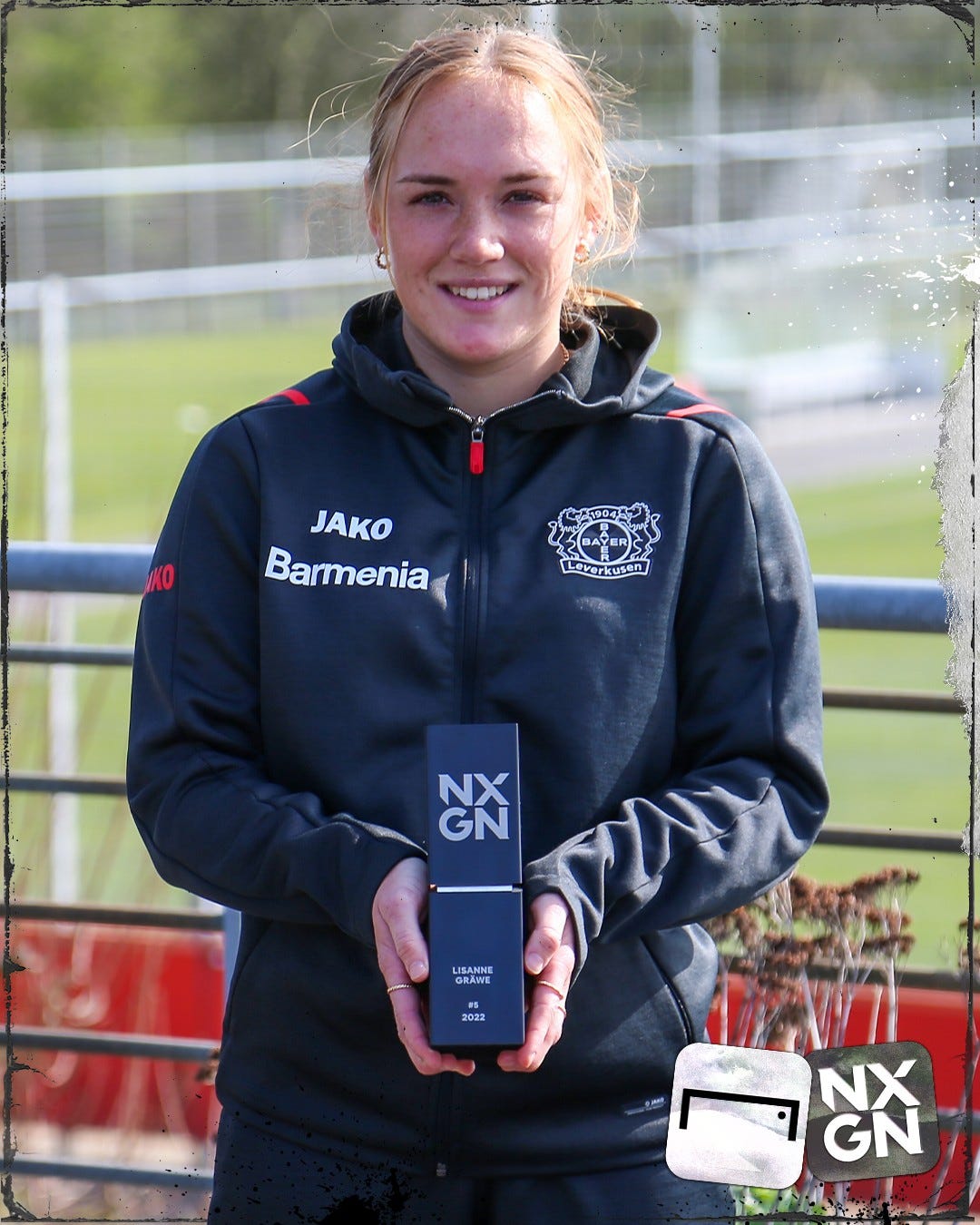 Grawe started playing football with her father and two brothers and would soon join a local side, FC Kaunitz, before moving to SC Wiedenbruck aged 14. With both, she’d played for the boys’ teams, something she only stopped doing when she joined Wolfsburg at 16 years old.

“It's physically something completely different,” she said in an interview with Eurosport. “I think I took a lot from that. Also, in terms of speed. With the girls, you could have held the ball longer and played more one-on-one, so I solved the situations more by eye and passing. It was also important for the speed of thought, so there were a few things I took away from that time.”

There’s no doubt that path has developed Grawe's reading and anticipation of the game massively, two huge strengths of hers in central midfield.

Her vision and passing are two other stand-out attributes, which perhaps shouldn't come as a surprise given she has long idolised Germany icon Toni Kroos, watching videos of him regularly to see how he distributes the ball.

“You could see in the youth teams that she had good technical possibilities, she can use both feet,” Feifel says, remembering what made her stand out when he first saw her play.

“She was very good at [dictating] the rhythm of the team from the central position. Also, in speed and in athletic possibilities, you could see early on that she could become a special player.”

Added to that raw talent, though, is real dedication. Grawe's decision to leave one of Europe’s top clubs to get game time in the Bundesliga shows her hunger, even as a teenager.

“It's very important that she reached the point of playing on the weekend and having many, many games last year,” Feifel believes. “It's very good for her development.

“It was her first season coming from the second league into the first league and sometimes she also has problems in the games, and she can see the things she has to become better at.

“I hope - and we are sure - that in the second season now, she can take the next step and reach more and more stability in the games, and from game to game have higher stability in her way of playing."

That new season will come under a new coach, with Feifel having moved into the sporting director role this summer and Robert de Pauw taking over the team, the Dutchman having led FC Twente to the title in his native Netherlands last campaign.

“I think the new coach will play football, he will come in attack not with long balls, but with the midfield players, with passing,” his predecessor says. “I think it is good for the central midfielders that the coach will have this style of playing and so it's good for also for the development of Lisanne.

Here's a look back at a 🚀 she scored earlier this season! pic.twitter.com/gAdSmzrWuc

“She has the personality and also the mentality you need to become a very good player in the Bundesliga and perhaps to make the last step to reach the national team. I think you can see the way she works, she will reach this aim for herself."