The U.S. national team veterans heard the jeers after failing to qualify for the World Cup, but they still helped deliver a postseason win

Every single touch, every pass and every dribble. Any time Michael Bradley and Jozy Altidore took possession of the ball Monday night, a half-full Red Bull Arena rained down the boos — louder boos than perhaps have ever been aimed at any player in this stadium. And the fouls? Any time Bradley and Altidore committed a foul the boos hit their peak, filling the stadium and even leading to one particularly pointed chant aimed at the striker.

Ten minutes later, having not yet found a moment to give Bradley the same treatment, Red Bulls supporters did just that out of the blue.

The jeers weren't simply about the MLS Eastern Conference semifinal first leg between the New York Red Bulls and Toronto FC, or even about the fact that Bradley and Altidore began their careers in the Red Bulls organization. No, Monday's chorus of jeers was about the lingering pain and disappointment caused by the U.S. national team's failure to qualify for the 2018 World Cup.

It wasn't the first time the pair faced that sort of treatment, with Atlanta United fans also booing them during the regular season finale.

Neither Bradley nor Altidore appeared to let the fans affect their game, as they played a big role in helping TFC leave Red Bull Arena with a 2-1  victory. That result sets up TFC to finish off the series Sunday in Toronto, where the Canadian club posted the best home record in MLS in 2017 (13-1-3).

Toronto coach Greg Vanney believes that, if anything, the boos only served to help the visitors get more out of the American stars.

It was Bradley who forced New York midfielder Felipe into a turnover that sparked a TFC counter early, with Altidore then maneuvering past a defender before sending a dangerous cross into the 6-yard box. Luis Robles parried it away, but the ball fell to Victor Vazquez for the eighth-minute opener. 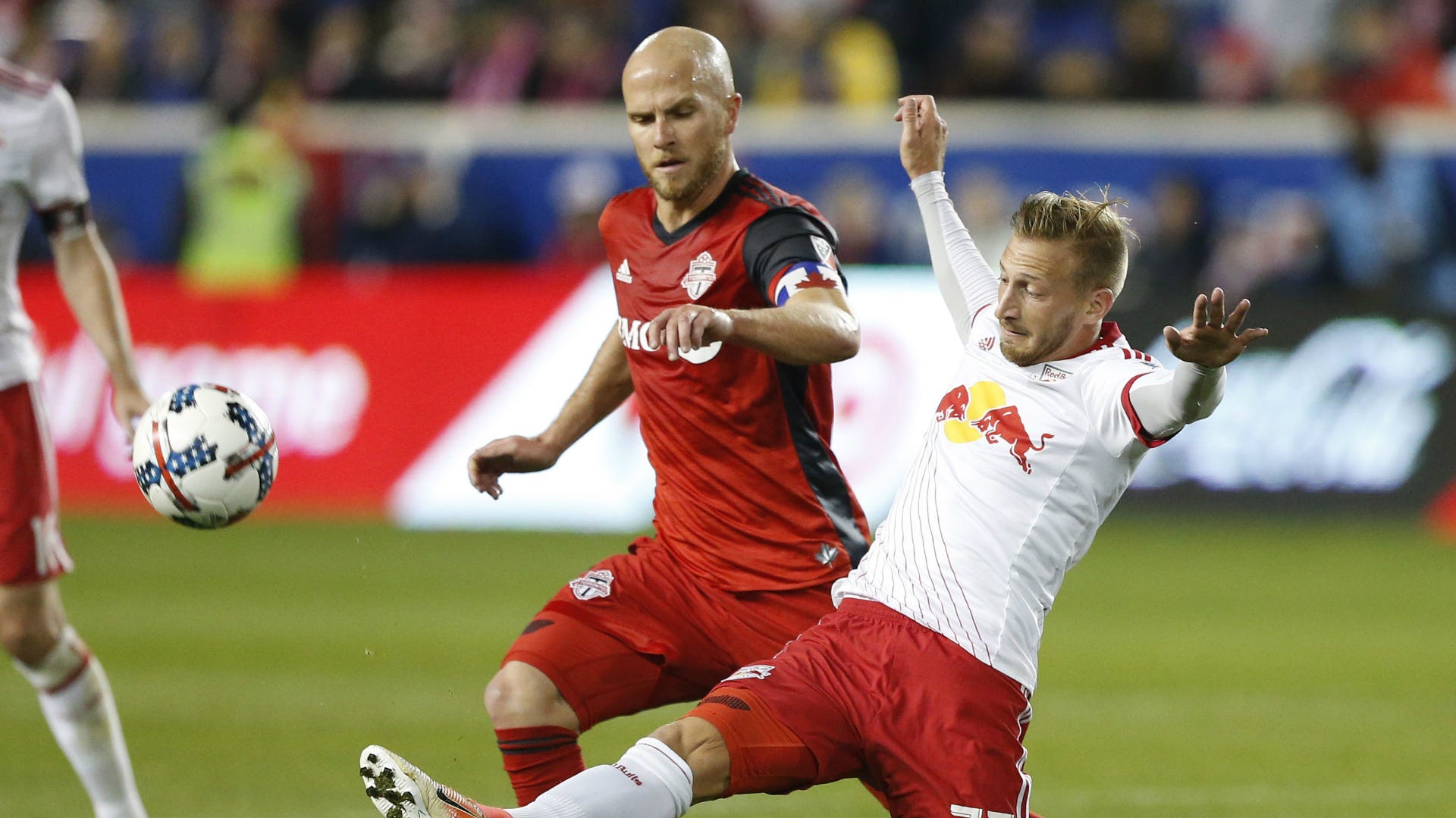 Altidore had a hand in TFC's second goal as well, winning a 50-50 battle with Aaron Long, overpowering the Red Bulls defender to gain possession and finding Giovinco with a pass. Giovinco proceeded to draw a foul that he promptly turned into his latest free kick masterpiece.

"I thought Jozy was outstanding," Vanney said. "He played big, he played physical. In days where you're not getting out in transition all that great, you need somebody who you can target, who you can play off of, who can hold the ball up, who can bring people in.

"His contribution was huge. It wasn't on the scoreboard, but I think Jozy is more than that," Vanney added. "We've learned that over the years. Jozy's the consummate team guy. He'll do whatever he needs to do on the day, and he doesn't get too caught up on how many goals he scores. We needed him to be the big guy tonight and he was great."

Altidore had the last laugh, as he walked off the field when he was subbed out in the 86th minute, taking a moment to clap for the fans of both the club he currently represents and those who once cheered him as one of their own. He kept a straight face for most of the walk off the field but could be seen cracking a smile as he sat down, knowing he and TFC came to New Jersey and did what they needed to do.

Toronto's victory means that the pressure is squarely on the Red Bulls, who must do what only one visiting team in 17 regular season matches was able to do: win a game at BMO Field. The task is made even more difficult by the two away goals TFC banked.

After the match, Altidore acknowledged being upset about some of the treatment that came his way considering he began his pro career with the Red Bulls in 2006, where he spent parts of three seasons before being sold to La Liga side Villarreal in a $10 million transfer in 2008.

"It's bittersweet. I had a lot of good memories, I thought, with Red Bull," Altidore said. "It's my first club that I played at. It was a bit classless. The World Cup, being disappointed with that, I get, I understand, but the other stuff is a bit disappointing. I was never disrespectful towards these people. It's my first club, and I have so much admiration for the club, so that part's disappointing. But the World Cup stuff, I totally understand that."

Altidore was the target of jeers during the match and heckles toward the TFC bench after leaving the match. He made no excuses for his role in the U.S. team's shocking World Cup qualifying loss to Trinidad & Tobago but made a point to say that missing out on the World Cup was a devastating disappointment for the players as well.

"That's the part that people fail to understand. Nobody suffers, nobody loses more than the players," Altidore said. "Look, I get fans, they put a lot into it, and we're nothing without our fans. But at the end of it, the biggest losers are the players and the program, not being able to further so much good work that we've done over the past 10 years.

"I get it. They're frustrated. I have no problem with that," Altidore continued. "I understand, but like I said, I just thought at some points it was a little bit classless (Monday) in a place I gave a lot to. And they gave a lot to me and had some good memories, but it is what it is. There's no loyalty anymore, so all bets are off." 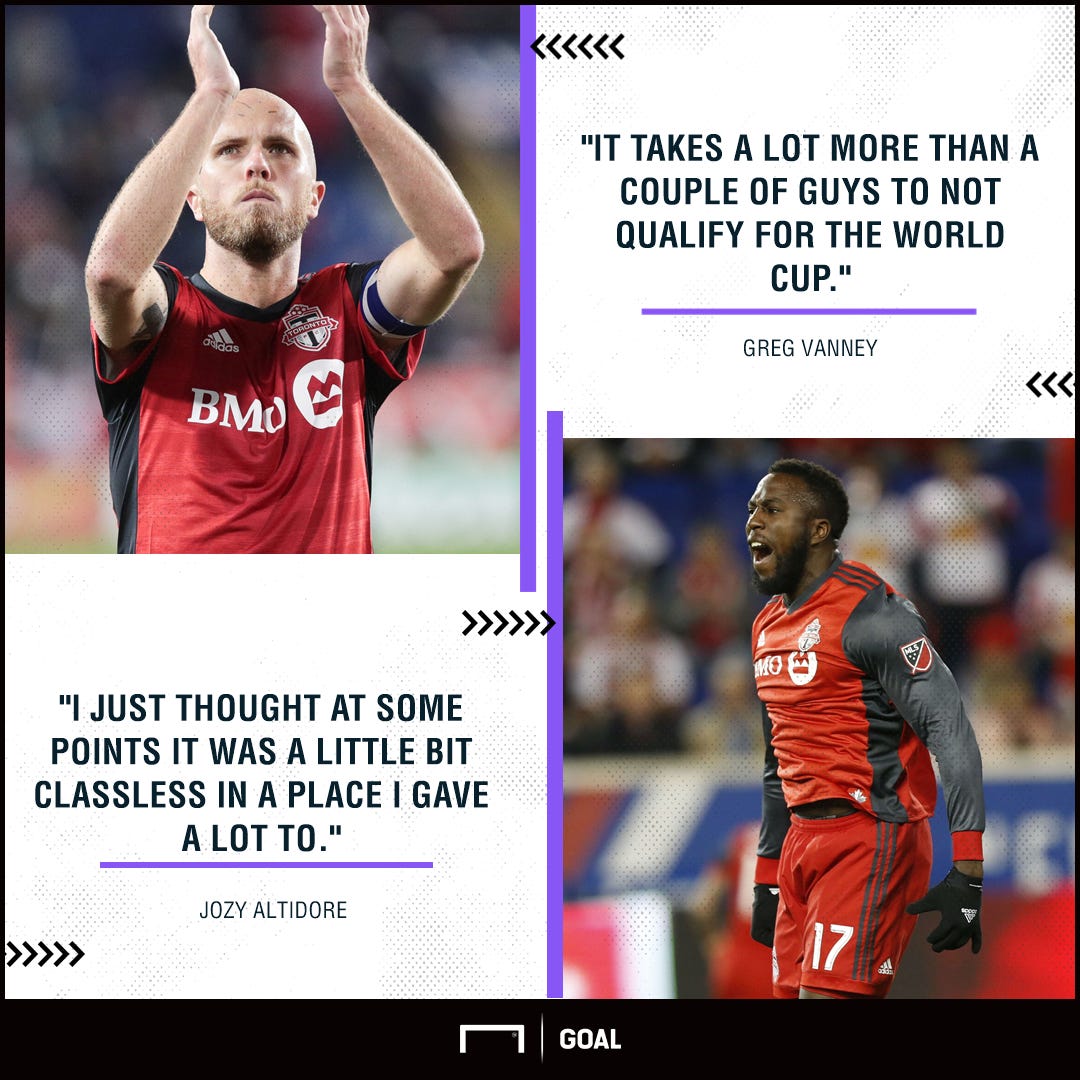 Bradley didn't react to the boos, but at one point late in stoppage time, a chorus of "Roma Reject" echoed from the Red Bulls supporters' section. As play stopped due to an injury, Bradley grabbed a water battle and took drink after drink as he stood near Toronto's goal, just a few feet away from the chanting. At times, he stared out at the supporters, many of whom were likely in that same section cheering him on just last month when the U.S. lost to Costa Rica.

"The people that come are allowed to support their team and try to do whatever they can to make an atmosphere to give their team an advantage," Bradley said. "How that goes is completely up to them. As players, as competitors, you enjoy playing in big games, you enjoy competing when everything's on the line. You enjoy playing in big atmospheres. You worry about things you can control, you worry about trying to play in the best possible way, compete in the best possible way, and you let the rest speak for itself."

For Vanney, a former U.S. defender, the boos aimed at Bradley and Altidore are misguided.

"I think the whole thing is nonsense," Vanney said. "It takes a lot more than a couple of guys to not qualify for the World Cup. It takes structural issues and a lot of other things.

"The fans have the right to do what they want, but these guys really stepped up and proved a point."