The familiar sunny disposition. The baby-faced appearance, albeit with tinges of grey in the hair these days. Watching Ole Gunnar Solskjaer stroll around Manchester United’s AON Training Complex was almost like being caught in a flashback.

Right now his job is a very different one from the role he fulfilled back in 1996 to 2007, but from listening to him at his first media conference on Friday morning he does not consider the task to be anything new.

The caretaker manager wants to help United play good football. He wants to get them entertaining the fans again. And he wants them to show they can fight for the team cause.

More than that, he wants that vision that Sir Alex Ferguson carried over from Sir Matt Busby before him to remain the guiding light at Old Trafford.

“My job is to help the players and make them grasp the opportunity now because they all want to be a part of Man United and I’m going to be here to help them of course, help the team,” said Solskjaer when asked about the apparent lack of unity under the departed Jose Mourinho.

“It’s down to man-management. I had the best manager as a player and as a coach to learn how he dealt with people. It’s about communication. Of course, I’ll sit down and speak to the ones who are not playing, what I expect from them.

“When you’re at Man United there are a set of demands and standards we set and one of them to be a team player, and I don’t think anyone has been on the bench more than me!” Of course, Mourinho’s big issue was his inability to get the best out of Paul Pogba, but Solskjaer worked with the Frenchman when he was United’s reserve-team manager between 2008 and 2010.

Consequently, he appeared undaunted by the task of bringing the star midfielder into line, again calling on his experiences under Sir Alex when expressing his desire for Pogba, and everyone else, to start enjoying their football again.

“It’s about getting every player to do their very best, it’s about speaking to them but of course it’s on the training ground, getting your philosophy through, your principles and how you want to play," he explained.

“No matter what team you’re coaching, and what players you’re coaching, they all want to have a picture of how you want to play but these are quality, quality players, so it will be easier to get these players expressing themselves.

"Good players are easier to coach than bad players. We play at Man United, and you play without fear, you play with courage, you go out and express yourselves, take risks.

"The last game [Sir Alex] had was the 5-5 game at West Brom. Of course, you don’t want to concede five goals, but it was almost the perfect end for him with the way he played football, and I want the players to be similar, be the kids that love to play football, and go out in front of the best fans in the world." 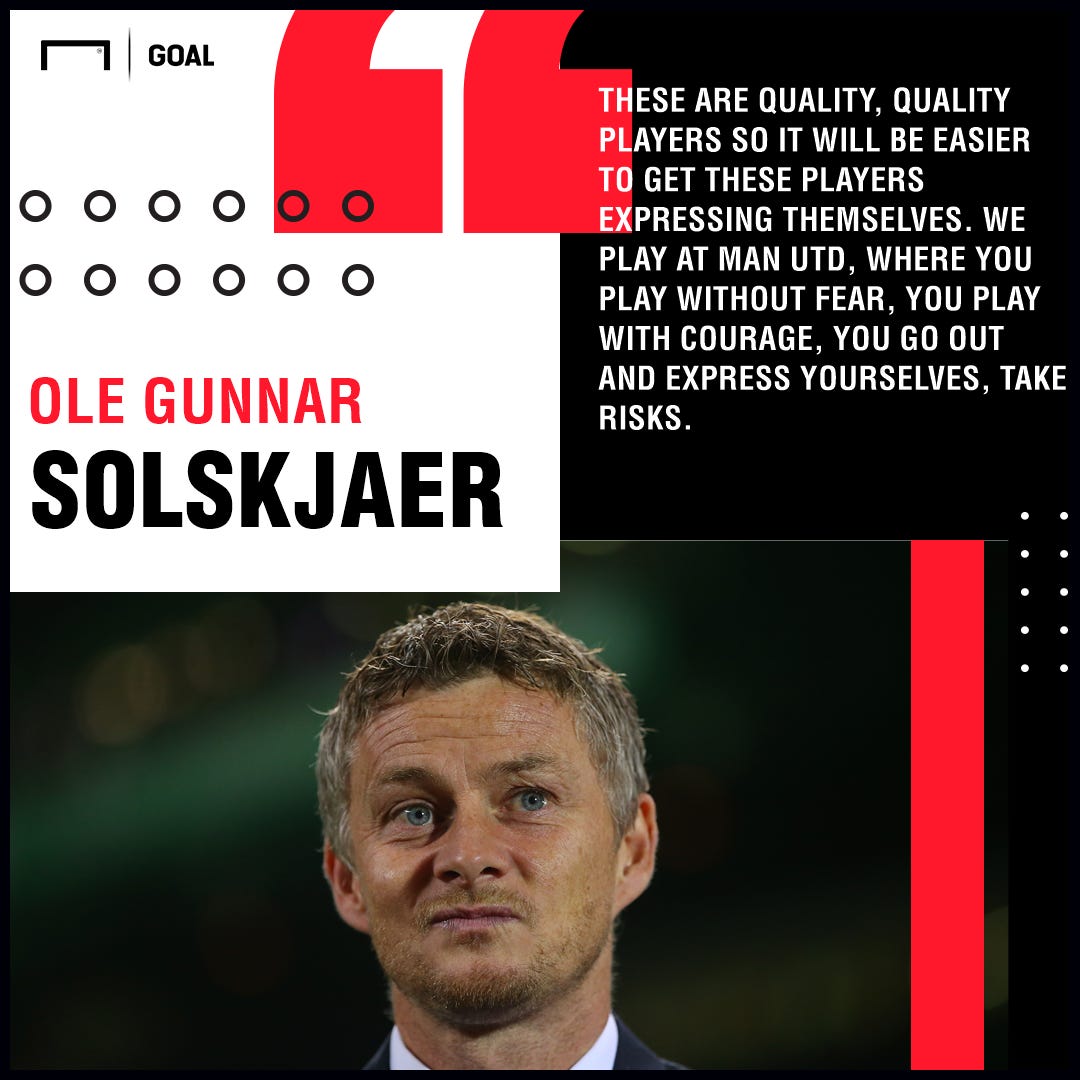 In so much of what Solskjaer said and how he held himself, it came right back to Ferguson.

“He’s influenced me with everything to be fair, the way he dealt with people, the way he was the manager of the club, how he kept 25 international players happy and hungry and wanting to improve, but also the staff in and around the place," he acknowledged.

"He’s been my mentor… And of course, I’ve already been in touch with him because there’s no one better to get advice from.”

Solskjaer clearly learned from the best. And while he has had his downs as well as his ups so far in his managerial career – Cardiff one; Molde the other – he looks like a man relishing the opportunity to work with the very best players, calling on the greatest of managers in enticing the thirst for football back out of his squad.

The smile is back. Will the real Manchester United follow?