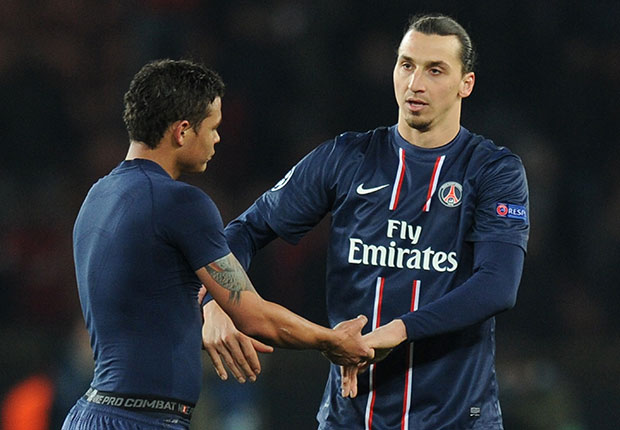 Thiago Silva wants to extend his contract at Paris Saint-Germain and says former team-mate Zlatan Ibrahimovic only joined the club because of him.

Silva and Ibrahimovic joined from AC Milan in 2012, a statement double signing for the Ligue 1 side after they had helped Milan to a second-place finish in Serie A.

Both have been key figures in PSG’s recent development, but captain Silva has now revealed he played an even bigger role than many might have realised.

"I had just signed my contract when he phoned me,” Silva told France Football.

“Zlatan is a great guy; I speak with him very regularly. I have a lot of respect and admiration for him.”

The 35-year-old Brazil international Silva is now approaching eight years at the club, a lengthy stay which he hopes to add to.

In March this year, he and his family obtained French passports, and Silva says he now feels like a true Parisian.

Asked if a new contract was on the horizon, he replied: "I hope so. We will discuss it soon.

“The idea is to stay at PSG and continue to grow the club. The eight years I have already spent can weigh in the balance. I think I have played a part in the development of the club.

"Today, after eight years here, with the passport in my pocket, I feel French. I'm proud of it.

“Paris is a part of my life. Paris is in my story. Nobody can take it away. I feel French, beyond the passport.

“Today, I'm Brazilian, born in Rio de Janeiro, but my second home is Paris. Nobody can change that. I'll be Parisian for life.”

While PSG’s grip on the French domestic scene shows no sign of loosening, Silva may well have regrets if they don’t improve on their best recent finishes in Europe.

To date, they are yet to progress beyond the quarter-final stage in the Champions League and have generally gone out in catastrophic fashion – from the 6-1 defeat in Barcelona to last year’s capitulation at home to an injury-riddled Manchester United side.

However, they have already booked their place in this season’s knockout stage, and will be looking to record a second victory over Real Madrid when the sides meet after the international break.