Missed chances and defensive mistakes. Arsenal are back in business!

Mikel Arteta’s side fell to a 2-1 defeat on Tuesday night as they kicked off their pre-season campaign with a game against Hibernian at Easter Road.

And it was a familiar story for the Gunners, who dominated for the majority of the game but were made to pay for some clangers at the back and a host of missed opportunities up front.

Ultimately, the defeat will matter little to Arteta and he will take positives from some of his side’s attacking displays, especially in the second half when Alexandre Lacazette, Nicolas Pepe and Emile Smith Rowe were introduced.

But Arsenal’s manager will be keen to build some momentum during pre-season and he will know his side must be more ruthless in front of goal if they want to win matches during the coming weeks.

They had a host of chances, with Eddie Nketiah missing a sitter in the first half and Reiss Nelson also failing to hit the target when well placed in the box.

Pepe and Thomas Partey both hit the woodwork in the second half, while Pepe also had a penalty saved by Hibs keeper Kevin Dabrowski.

It was a frustrating evening in the final third for the visitors and at the other end they gifted their hosts a goal in either half. 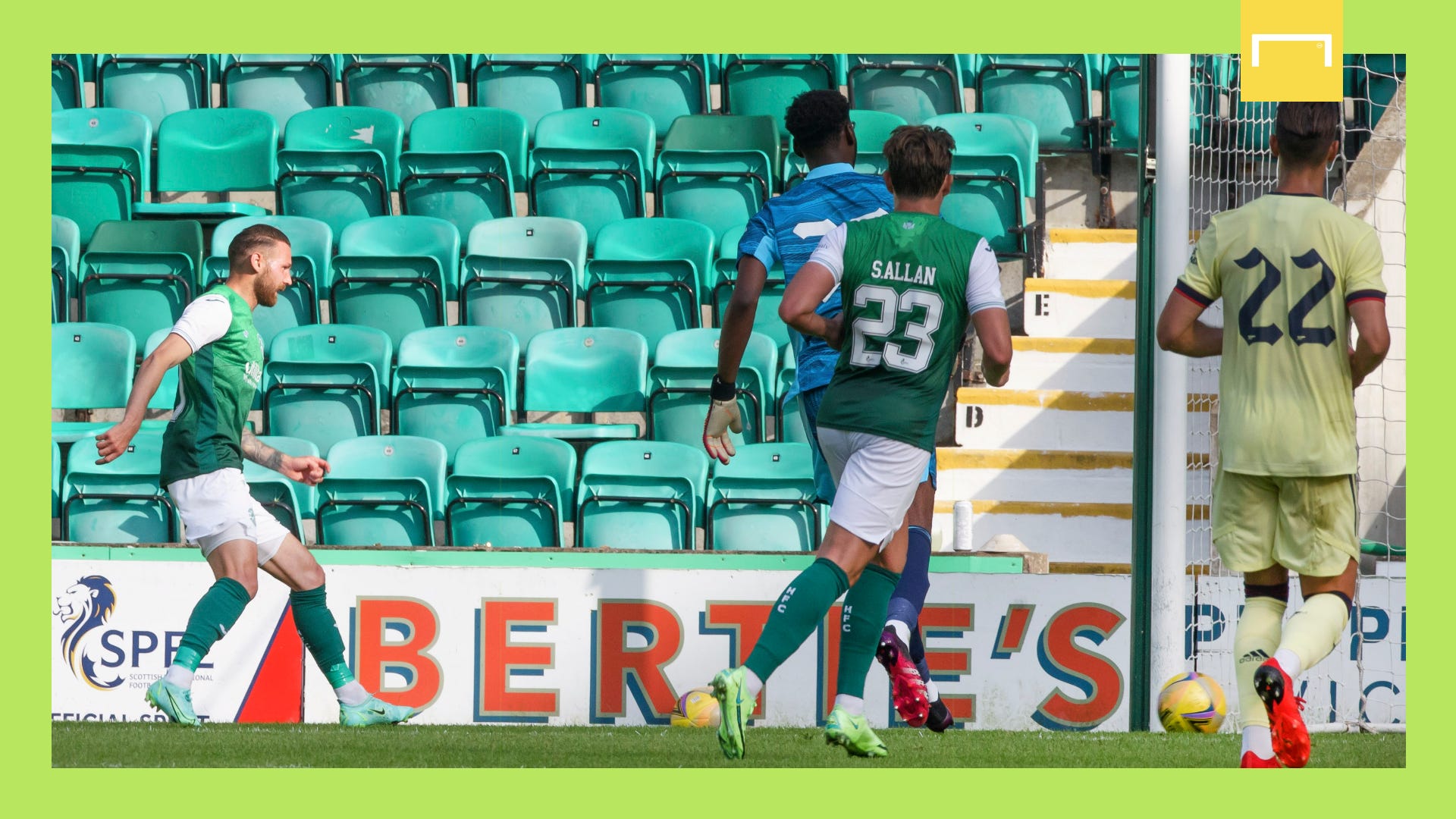 Teenage goalkeeper Arthur Okonkwo, who has just signed a new contract, had a moment to forget midway through the first half when he totally missed Cedric Soares’ back pass, allowing Martin Boyle to score into an empty net.

And then poor marking from a corner on 69 minutes led to Daniel Mackay doubling Hibernian’s lead on one of the few occasions the home side ventured forward after the interval.

Smith Rowe did pull a goal back late on for Arsenal, but it was nothing more than a consolation and Arteta will want to see a far more clinical performance from his side when they take on Steven Gerrard’s Rangers at Ibrox on Saturday.

Arsenal actually started the first half quite brightly and should have opened the scoring within 10 minutes through Nketiah.

The 22-year-old did well to rob Paul Hanlon of possession deep in the Hibernian half but he rolled his shot wide from the edge of the box after racing through one on one.

Nelson then had a couple of good opportunities, the first he saw blocked from Sead Kolasianc’s cushioned header and the second was pushed wide by former Arsenal keeper Matt Macey.

It looked at that point like the opening goal was just around the corner and it arrived on 21 minutes, but it was Hibernian who scored it rather than the visitors, with Boyle taking advantage of Okonkwo’s unfortunate mistake.

That was a lead the hosts took into the break. They could even have added to it, but Steven Bradley’s strike on the break hit the post.

Arteta made several changes at half-time, with Lacazette, Pepe, Partey, Smith Rowe and Folarin Balogun all coming on.

And the changes certainly led to a far better Arsenal performance after the interval, with the visitors dominating the majority of the second half.

Pepe looked very bright and saw one excellent free kick tipped onto the crossbar soon after the break.

The Ivory Coast international also had an effort deflect wide after a smart move involving Smith Rowe and Lacazette.

Balogun looked certain to equalise from Cedric’s low ball across the six-yard box, but couldn’t quite get the touch at the back post.

Arsenal were dominant at that point, but it was Hibernian who struck next to double their lead, with Mackay left unmarked from a corner to head home from close range on 69 minutes.

The visitors had a golden chance to equalise moments later when they were awarded a penalty for a foul on Pepe, but the Arsenal winger saw his spot kick saved by Dabrowski.

Smith Rowe did make it 2-1, however, eight minutes from time when he finished off a patient move with a far post volley from Hector Bellerin’s cross, but that was as good as it got for Arteta's side.