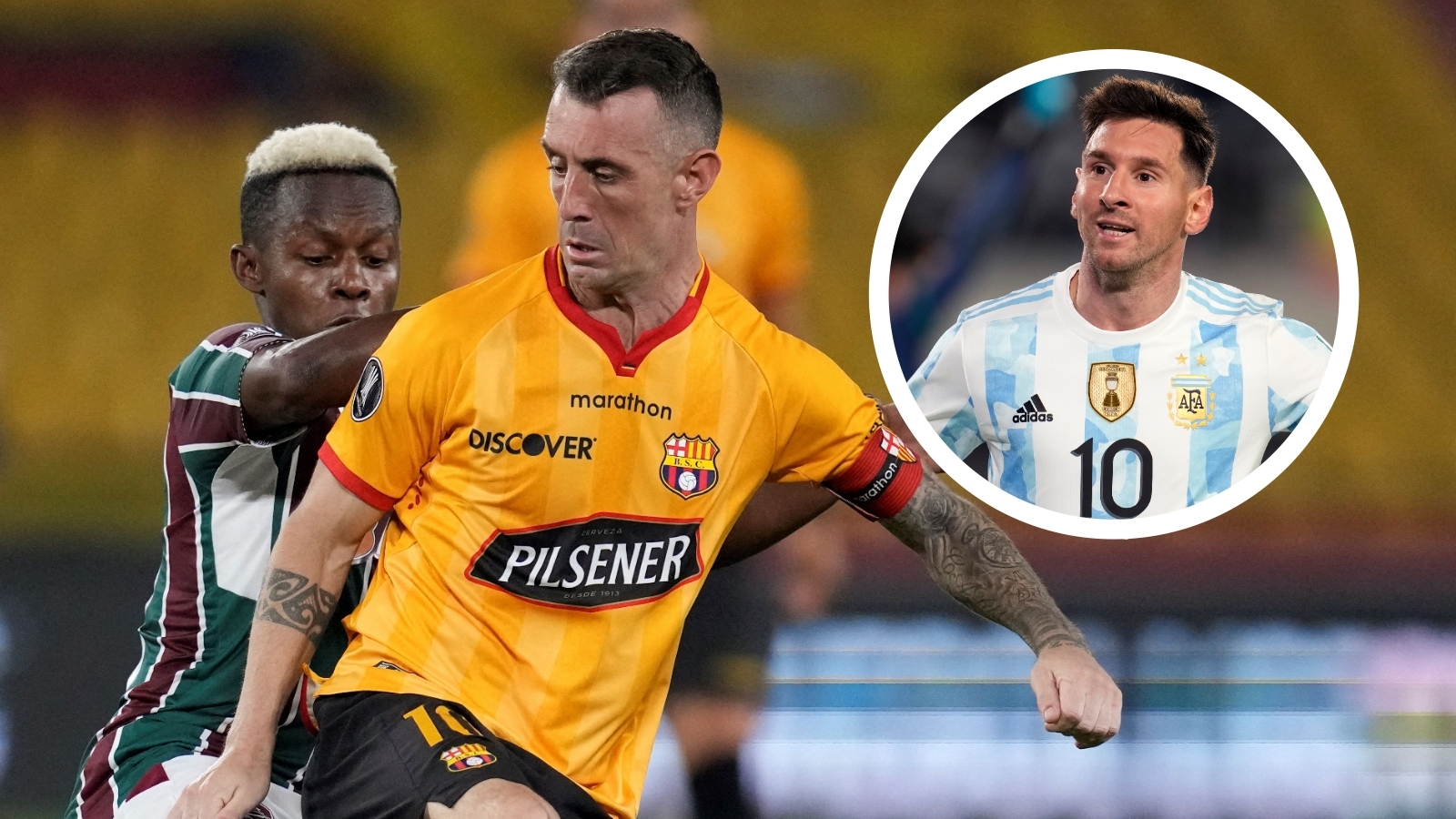 The 35-year-old has become a legend at the Catalans' Guayaquil-based namesakes, and now faces a daunting semi-final challenge against Flamengo

Even if it is only an outside possibility, glory might just be on the horizon for Barcelona this year.

Inspired by the performances of their Rosario-born idol at No.10, the club are just three games from being crowned continental champions after a stirring campaign.

No, we have not slipped into a parallel universe. Nor is the above paragraph the fan fiction of a fevered Catalan's pen.

Ecuador's Barcelona face the tie of their lives against Flamengo in the Copa Libertadores semi-finals, and their own diminutive Argentine captain and playmaker, Damian Diaz, is preparing for yet another giant-killing feat against the Brazilian powerhouses.

Just like Lionel Messi, Diaz honed his trade on the streets of his hometown Rosario, in his case graduating from the academy of Newell's Old Boys' eternal rivals Central, although while he is just one year older than the Argentina and Paris Saint-Germain ace, no record exists of them having met on the field as kids.

But while his former neighbour took the fast-track to stardom, 35-year-old Diaz had to make it the hard way.

An early move to Boca Juniors proved a flop after bursting onto the scene as a youngster with Central, and only in subsequent spells in Chile with Universidad Catolica and back in Argentina at Colon did 'Kitu' begin to make a name for himself as a talented playmaker with a fierce right foot.

In 2011, he found himself the subject of interest from across South America, but chose Ecuador and Barcelona. For the past decade, save two seasons in the United Arab Emirates, he has starred in Guayaquil, leading the club to three national titles and another Libertadores semi-final back in 2017, in the process becoming one of the greatest players in their history.

🤹‍♀️🇪🇨 To the rhythm of Damián Díaz!

⭐ All the best moments from @BarcelonaSC 's impressive number 🔟 so far this CONMEBOL #Libertadores ! pic.twitter.com/Bc1IKD4zGq

His consistently excellent displays even led to a change in nationality, as he took Ecuadorian citizenship in order to represent the Tricolor and made his debut in 2021. The veteran might even have locked horns with Argentina and Messi in this year's Copa America, but Diaz was ruled out of their quarter-final after contracting Covid mid-tournament.

While Diaz's principal role is that of creator, playing just behind sole striker Gonzalo Mastriani in coach Fabian Busto's first-choice line-up, he is also no slouch when it comes to netting himself.

He averages just under a goal every four games for Barcelona; not Messi numbers by any means, but a valuable contribution nonetheless from midfield. His trademark moves on the pitch are his sumptuous nutmegs, which have left more than a few defenders flailing over the years.

“I always did them as a kid, my dad had a very similar style of nutmeg that I like to do,” he explained to the Copa Libertadores' official website. “Sometimes it feels good to do a nutmeg, you feel like you do it responsibly but also with the feeling you are helping people watching enjoy themselves.

“It's something from the streets, the neighbourhood games, and I hope to keep doing it until the day I retire.”

He also pays close attention to his compatriot's play, while admitting that some of his moves are simply out of his league.

“For me he [Messi] is the best player in history,” Diaz told a press conference in 2020. “I try to copy some things from him, not so much football things because I won't be able to pull them off, nor am I left-footed like he is.

“I always enjoy watching his games, he conducts himself in a very humble fashion.”

Diaz will have to have to be at his absolute best to engineer an upset in Wednesday's first leg in Guayaquil. Flamengo won the Libertadores back in 2019 and also boast back-to-back Brazilian titles, as well as the talents of Gabriel 'Gabigol' Barbosa, Everton Ribeiro, Filipe Luis, ex-Valencia shot-stopper Diego Alves and new arrival David Luiz.

In the last three editions of the continental competition, the Mengao have lost just four games, with their last defeat coming all the way back in September 2020.

It may give Barcelona some reassurance, though, to learn that their three most recent Copa reverses have all come against Ecuadorian opposition; a thumping 5-0 humiliation at the hands of Independiente in the 2020 group stage, a 2-0 loss to their Guayaquil rivals Emelec the previous year in the last 16, and group defeat against LDU Quito in the nation's capital.

Having already disposed of two tough rivals on their way to the semis – Argentina's Velez Sarsfield followed by Fluminense - as well as topping a group that included heavyweights Boca Juniors and Santos, beating them both along the way, Bustos' men will see no reason why they cannot continue in the same thrilling vein and set up a clash in the final against either Palmeiras or Atletico Mineiro.

This will nevertheless be a David vs Goliath clash over two legs – or should we say, Damian vs Goliath?

For if Barcelona are to stand a chance against one of the tournament favourites, they will need their little legend to be on his best form and pull off a feat worthy of his more illustrious fellow Rosarino No.10.