The Gunners failed dismally to bounce back from their unlucky midweek loss at Wolves, succumbing meekly to Ollie Watkins' early goal at Villa Park

It was a week that started full of promise, but one that has ended in huge disappointment for Arsenal.

They went into it unbeaten in the Premier League in 2021, but two successive defeats have left their top-six hopes hanging by a thread.

It had all been going so well until just before half-time at Wolves on Tuesday night. Mikel Arteta’s side were 1-0 up and looked to be heading for what would have been a sixth league win in eight games.

But then a red card to David Luiz and a penalty for Wolves turned the game on its head and things have gone downhill for Arsenal ever since.

They were beaten 2-1 at Molineux and they ended up empty-handed again at Aston Villa on Saturday afternoon, going down 1-0 in the Midlands.

The momentum they had built up so impressively since the win against Chelsea on Boxing Day has now come to an abrupt stop and Arteta’s side once again find themselves looking up in the Premier League table.

Victory at Villa Park would have taken them eighth and left them just two points adrift of sixth-placed Chelsea, but instead they now sit 10th and could end the weekend nine points adrift of the top six.

Arsenal paid the price for a dreadful start against Villa, conceding what proved to be the winning goal within the first two minutes following an awful mistake from Cedric Soares.

The Portuguese defender, who is still deputising for the injured Kieran Tierney at left-back, gifted possession to Bertrand Traore and his cross was turned in by Ollie Watkins, whose shot deflected past debutant Mat Ryan via a touch off Rob Holding.

It was the worst possible start for Arsenal, but given the way they have been playing since the turn of the year, you expected to see a big reaction from Arteta’s side.

But it never really came. 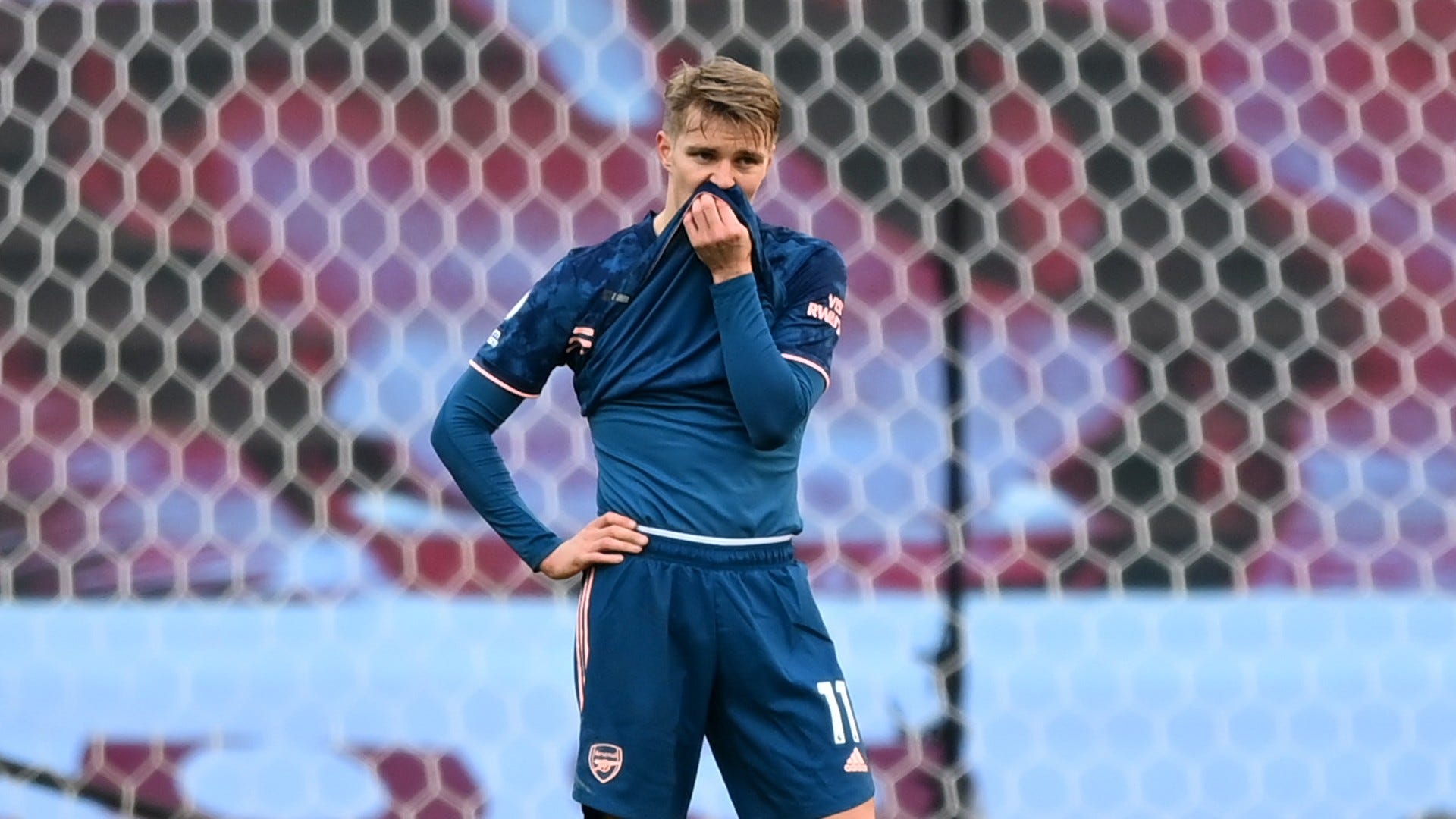 While they could quite rightly feel hard done by after the defeat at Wolves in midweek, they could have no such complaints after this latest loss – although Ezri Konsa was perhaps fortunate to only get a yellow card when he hauled down Bukayo Saka, while Alexandre Lacazette could have had a penalty after appearing to be pulled over by Emi Martinez.

But, in truth, Arsenal deserved little from the contest and have now lost 10 of their 23 Premier League games this season – their worst tally of defeats during a solitary campaign since 1983-84.

Arteta’s side were poor in the first half and although there was an improvement after the interval, they rarely troubled Martinez in the Villa goal.

New signing Martin Odegaard came on for the final half an hour and blazed one good opportunity over the bar while Nicolas Pepe, who kept his place in the side following his impressive performance at Molineux, rolled one effort wide of the far post.

But despite having over 70 per cent of the ball after the interval, clear chances were few and far between and had Ryan not been in fine form at the other end, the defeat could have been larger.

The Australia international’s debut could not have started any worse, with the goal he conceded coming before he had even had a touch of the ball, but he made some impressive stops to deny Watkins in the second half and also kept out a stinging drive from Jack Grealish.

Arsenal have now picked up just one point from a possible nine in the Premier League and they head into a run of fixtures which will see them take on Leeds, Manchester City and Leicester.

Their impressive run of form after Christmas had raised the possibility of an unlikely late push for a European spot, but now they appear to once again be becoming bogged down in a mid-table battle.

The rebuilding job Arteta has on his hands at Arsenal is vast.

It had looked like the Gunners were heading in the right direction again, but in the past week they have been handed a stark reminder of how much work they still have to do to get themselves back in the race for a top-four finish in the Premier League.